Chants of "shame, shame!" forced lawmakers to flee after voting for measure to sue "disruptive" protestors 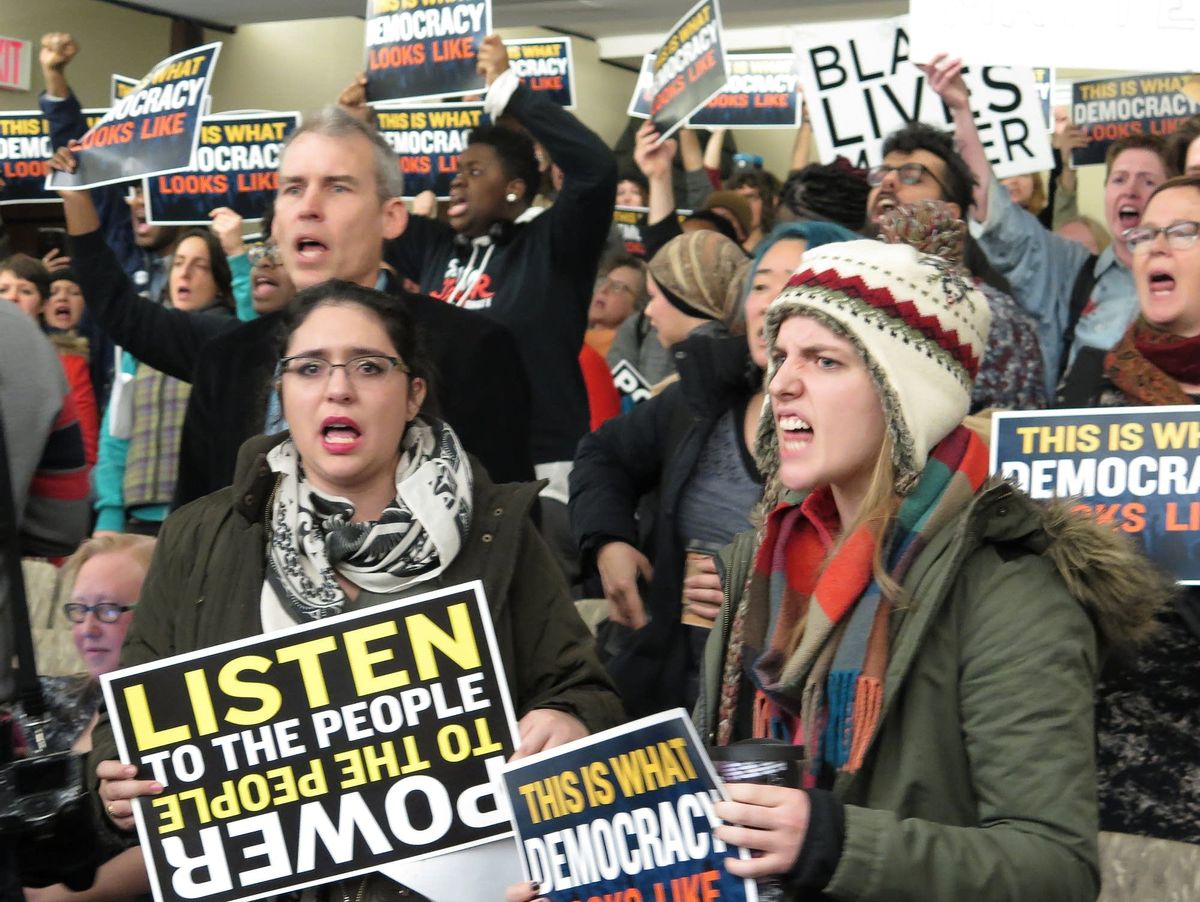 Protesters on Tuesday shut down a Minnesota House of Representatives hearing after lawmakers voted to pass a GOP-led measure that would charge activists for law enforcement costs associated with disruptive demonstrations.

Tuesday's committee meeting ended abruptly after the bill to allow local police departments to charge protesters for the costs associated with demonstrations passed nine-to-six along party lines in the House Civil Law and Data Practices Policy Committee — with every Republican on the committee voting for it, and every Democrat against.

Citizens at the hearing shouted "Shame, shame!" after the vote, prompting lawmakers to walk out without taking up a second measure.

The bill was proposed by Republican Rep. Nick Zerwas of Elk River, who said local law enforcement has spent $2.5 million dealing with protests in the last 18 months. Zerwas said he arrived at his total policing cost by adding up estimates in media reports -- figures that cannot be independently verified. His bill has 27 co-sponsors.

Zerwas singled out the civil disobedience tactic of protesters blocking local freeways when presenting the bill to the house civil law committee. Protesters blocked highways in response to the July fatal shooting of Philando Castile, a black man who was killed in front of his girlfriend and child, by police officer Jeronimo Yanez at a traffic stop in Falcon Heights, a suburb of St. Paul. Smoke bombs, tear gas and pepper spray were used on the crowd and dozens were arrested.

“I have an entire constituency that feels as though protesters believe that their rights are more important than everyone else’s,” he said. “Well, there is a cost to that. Rosa Parks sat in the front of the bus. She didn’t get out and lay down in front of the bus.”

Zerwas argued there was precedent in Minnesota law, citing a statute that allowed government units to sue those who intentionally started forest fires for public safety response costs.

“Taxpayers are holding the bag,” Zerwas said. “That’s not right.”

Protesters, however, directed their ire over the bill at several elected representatives, who they accused of siding with Zerwas' constituents over them.

"Vacate your seats...Go the hell back to Elk River...You don’t represent us.”

Elk River is a small city north of Minneapolis. As of the 2010 census, it was 93.4 percent white.

“Being black is a crime in Minnesota. We are coming for your seats," Thompson warned to raucous applaud from the crowd.

more of this. This is how it's gotta be all over https://t.co/gD8zvqkYx3 pic.twitter.com/RqQsTEt5Z2

The bill now goes on to the House Public Safety Committee.

Minnesota's proposal is part of a broader trend of bills that punish protest in US state legislatures. Measures aimed at toughening laws against demonstrators have also been introduced in North Dakota, Iowa, Michigan, Indiana, Colorado, Virginia and Washington state as protests have proliferated in recent months.

A Republican lawmaker in Iowa pledged to introduce legislation establishing criminal penalties for protesters who shut down highways. In Washington, a GOP lawmaker recently introduced a bill that would consider protesters to be domestic terrorists, creating a new crime for protesters who “cause an economic disruption.”

A North Carolina Republican lawmaker announced this week that he plans to introduce legislation that would “make it a crime to threaten, intimidate, or retaliate against a present or former North Carolina official in the course of, on account of, the performance of his or her duties.” The bill is in response to a video posted on Facebook showing a group of people shouting epithets at former North Carolina Gov. Pat McCrory during his trip to D.C. for inaugural weekend.

"I don't think this is a coincidence that this is happening at a time in our nation where there are widespread movements led by people of color for racial equality," Teresa Nelson, legal director of the American Civil Liberties Union (ACLU) of Minnesota, told the Star Tribune. "It is very troubling that we would see this kind of suppression and these attempts to intimidate people who are engaging in constitutionally protected speech and civil disobedience."

According to Zerwas, making civil disobedience harder is exactly the point of the legislation in Minnesota.

“It’s a tactic, but it comes at a cost. You break the law to make a point and then you pay the penalty,” he said.