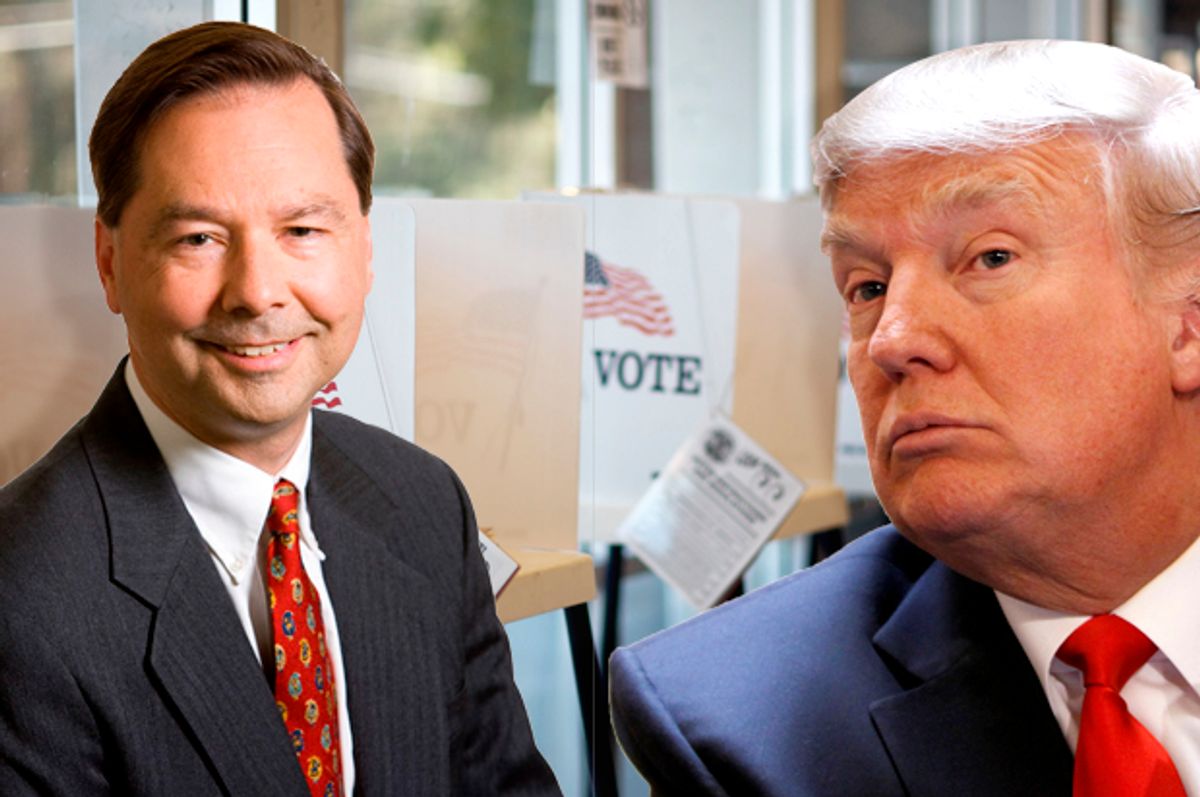 Rumor has it that even though he seemed to be reacting in response to questions from the press this week, Donald Trump has wanted to launch his "voter fraud" investigation ever since he realized he lost the popular vote by a huge margin — and people inside the administration were desperately trying to talk him out of it. I have no way of knowing whether this is true, but Trump has made it clear since the election that he believes there was massive fraud in November:

For the record, there's no evidence that systematic voter fraud exists. None. Nonetheless, Trump repeatedly made the claim the election was "rigged" during the campaign, eventually saying that he would accept the election results — if he won. He even lied about that. He won, but he still won't accept the results.

It obvious that this obsession with voter fraud in the face of winning an election is another aspect of Trump's bottomless narcissism. From what he said in his interview with David Muir on ABC, he believes that the problem only exists in places he didn't win. He told Muir that every one of the alleged 2 million to 3 million illegal votes went to Hillary Clinton. But it's important to recognize that Trump is felicitously playing into the hands of right-wing operatives who have been working to suppress the votes of Democratic constituencies for years. And they are very excited about this new "investigation."

One of Trump's advisers on immigration, Kansas Secretary of State Kris Kobach, has reportedly been encouraging Trump to initiate this investigation. He told the Wichita Eagle on Wednesday:

I’ve advised [Trump] on the issue of voter fraud in multiple forms. I’m not the only one, but he’s been very interested in finding ways to reduce voter fraud.

I know that he is interested in investigating the issue on a national scale, but I also know that he would like to see the Justice Department launch specific investigations where there is real serious, specific evidence of voter fraud.

There seems to be a plan to focus this "voter fraud" investigation on the big liberal states and urban areas that do not vote for Republicans. Indeed, this is something the right wing has been trying to do for years and it was that effort that led to one of the greatest political scandals of the George W. Bush administration: the U.S. attorney scandal. You may recall that this was all about trying to force federal prosecutors to pursue phony voter fraud cases in Democratic states, often against Democratic officials. When these prosecutors refused, they were fired and replaced.

I've written about Kobach for Salon before, both when he was a somewhat obscure figure in the conservative movement and again when he ascended to the highest levels of national politics. He has two missions in life, and they're tied together. The first is to suppress the votes of Democrats and the second is to curb immigration. The Republicans see both of these goals as essential to their ability to win in the future since their base of white conservative voters is shrinking. Trump's motives are simpler, as are his supporters': They believe immigrants and American-born people of color are cheating at the ballot box in order to gain "goodies" from the federal government, at the expense of hardworking real Americans.

But Kobach is not the only person pushing these two interconnected issues. There is an entire political industry devoted to it, from sophisticated election attorney networks like the Republican National Lawyers Association to grassroots organizations like True the Vote. And there are certain "experts" who have been around for a long while, pushing the issue whenever the opportunity presents itself.

One of them is a man with the striking name of Hans von Spakovsky. Those who follow voting issues are very familiar with him from his time in the Bush administration's Department of Justice voting section, where he worked to undermine the Voting Rights Act and played fast and loose with ethical rules, as amply documented in a piece by Dahlia Lithwick at Slate. Von Spakovsky was serving as a recess appointment to the Federal Election Commission at the time and up for consideration as a permanent member. The Democratic Senate refused to confirm him, and not just because of his ethical lapses. He is a zealous activist for vote suppression all over the country.

He, too, has an attitude that often reveals his underlying motivations. He recently spoke with Breitbart News:

“Their attitude towards any voter fraud prosecutions has always been: if the defendants are black, well, you must be doing it for racist reasons,” he noted. “Remember, we saw that in the New Black Panther story out of Philly in 2008, when Eric Holder came in and immediately dismissed the voter intimidation case against them, despite the overwhelming evidence that the Black Panthers had been intimidating voters and poll watchers. It was dismissed by the Obama Justice Department because they didn’t believe that black defendants should be prosecuted. They don’t believe in the race-neutral enforcement of the voting and election law.”

The New Black Panther case was another cynical attempt by the right wing to turn the tables on Democrats and the Obama administration to show that African-Americans are the real racists. It was absurd but made for good copy and continued to provide cover for conservatives who seemed to see vote fraud in every urban neighborhood where black or brown people lived.

This week von Spakovsky wrote an op-ed for Fox News with fellow voter-fraud obsessive John Fund of the National Review, lauding President Trump for his decision to investigate. They relitigated the tiresome New Black Panther story and accused the Obama-Holder Justice Department of encouraging nonexistent systematic voter fraud by refusing to force states to purge voters from the rolls, quoting the same Pew study that Donald Trump cites as his expert source on the subject. (The author of the study has repeatedly made it clear that he did not find evidence of voter fraud. They keep citing it anyway.) In particular, they  cited California as being a hive of fraudulent voter activity that requires federal intervention.

It's unknown at this point who will be heading Trump's "investigation" or what form it's likely to take. (It's always possible that more rational White House aides can talk the president out of this foolhardy and wasteful boondoggle.) But Kobach is definitely advising him informally and you can be sure von Spakovsky stands ready to help in any way he can, along with dozens of others who have been working on this so-called issue for many years. Their calling is keeping people from voting, and Donald Trump has given these zealots a new lease on life.