An adventure story based on the true life saga of a scoundrel's gold fever underwhelms, but how? 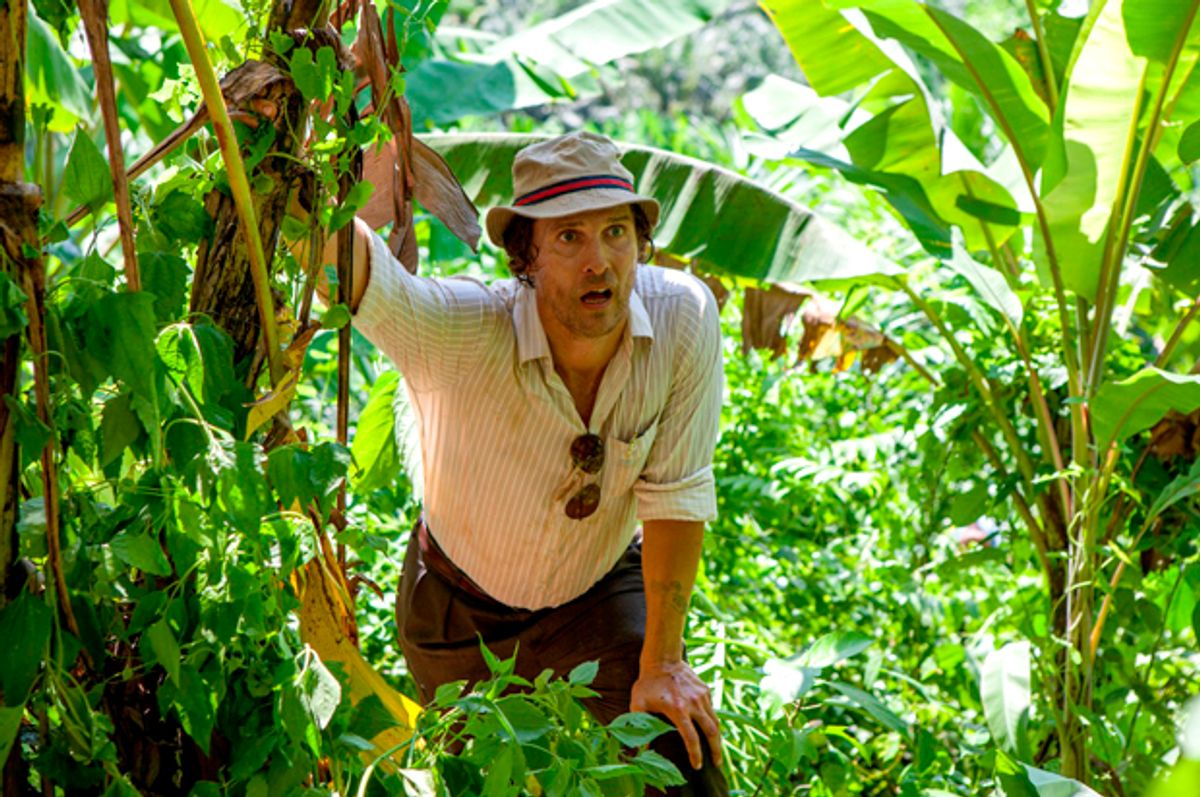 “Gold” is inspired by a true story of Kenny Wells and the Bre-X case. The film recounts so many reversals of fortunes that viewers are likely to get whiplash — if they still care to follow the action in the last reel.

The film opens in 1981 Reno, when Kenny is working for his father’s company, Washoe Mining. Kenny is such a slick operator that every time he drawls the words, “Washoe money,” it sounds eerily like he’s saying, “Watch yo’ money!” Given what happens to Washoe investors, you can’t say folks weren’t warned.

Cut to seven years later, where the failing economy has Kenny operating what’s left of the family business out of a bar. He’s balding, potbellied and desperately looking for a mother lode. As his voice-over indicates, Kenny is living with his girlfriend Kay (Bryce Dallas Howard) and about to lose the house, too. But then Kenny, sleeping off half a gallon of Seagram's, has a dream.

He envisions the “ring of fire,” a huge, buried gold mine in Indonesia. His dream looks like a Sebastian Salgado photograph, with local men climbing ladders up hills (rather than going into pits) with sacks on their backs. And at the heart of his dream is Michael Acosta (Edgar Ramírez), an Indiana Jones-ish geologist who talks about geothermal hot spots while a woman massages him. Michael is the man — sauve, practical and smart. Kenny decides, he will be the money.

Pawning the gold watch he gave Kay, Kenny travels to Jakarta to meet Michael. His beaming smile as he cabs to Michael’s hotel is meant to be infectious, but it comes off as a foolish grin. Kenny uses his rascally charm to purr seductively at Michael and convince him to go for the gold. But Michael is unmoved; he calls Kenny’s bluff, saying he will “make it work.” The two men soon head out into the jungle in search of that hidden treasure, the “ring of fire.”

“Gold,” however,  doesn’t really develop any genuine excitement in the scenes or between these two larger-than-life characters; the dynamic is too cool. That might deliberate given how the story pans out, but the lack here is indicative of the film’s larger problems. For example, despite the heat, rain and mud in the Indonesian jungle, little of the atmosphere feels palpable. When Kenny is laid up with malaria, and the workers go on strike and financial setbacks occur, the drama still fails to engage emotionally. These moments only signal that a huge payoff is coming.

And sure enough, a few scenes later, Kenny, cured of malaria and clad in his tighty-whiteys and an Iron Maiden T-shirt, wraps his legs around Michael’s waist hugging him exuberantly. The geologist has claimed they just found gold. It’s a big, emotional moment. But the film is so flat, it's is hard to share the men’s enthusiasm. Moreover, when one character describes how gold is like a drug, “the taste of it on your tongue. . . the feel of it on your fingers,” Gaghan fails to convey that sense of wonder, either.

Viewers should sense early on that there is something phony at play. And there is, as “Gold” eventually reveals in a scene that is not nearly as jaw-dropping as it should have been.

This may be because Gaghan stretches out the film needlessly before that big moment. There is a lengthy, unexciting subplot involving Brian Woolf (a wasted Corey Stoll), whose company wants to offer Kenny “strategic help.” This narrative thread spirals out further to have Brian’s colleague, Rachel (Rachael Taylor) flirt shamelessly with Kenny, causing him to fight with Kay.

Later, Mark Hancock (Bruce Greenwood), a tycoon makes a generous offer to Kenny that drives the film in yet another direction. When “Gold” starts to involve the scion of Indonesian President Suharto and a bet involving Kenny touching a tiger between the eyes, the film has become as flabby as Kenny’s potbelly. Sure it’s based on a true story, and it’s all meant to be fascinating, but somehow it just isn’t.

As “Gold” lumbers on, the film has a few more tricks up its sleeve. Various scenes featuring Jennings (Toby Kebbell) talking to Kenny interrupt the main action from time to time, foreshadowing what is to come. But even viewers unfamiliar with the real events will probably guess what goes down. This editing dilutes the dramatic punch of the narrative twists, softening their impact.

“Gold” may be less concerned with the story and more an excuse for McConaughey’s wily, showboating performance. The actor dives deep into the role, and he gestures grandly — throwing glasses into walls or standing bare-assed in front of Mark Hancock — to convey his brash, reckless behavior.

Gaghan frequently shoots McConaughey in intense close-up, likely to convey that the character is thinking how to get out of each tricky, sticky situation he faces. But it may also be the case that these shots are part of the Oscar-winning actor-producer’s contracted number of close-ups. Despite McConaughey’s commitment to the role, his Kenny is more pathetic than sympathetic, which makes caring about him for two hours a difficult task. (It would have been interesting to see what Woody Harrelson would have done in the role).

Perhaps the film’s greatest flaw is that the big question asked of Kenny in the film by Jennings elicits more of a yawn than a sense of urgency. The truth should nag at viewers, but a key scene that might actually answer the question feels disingenuous, even irksome.

The supporting performance by Edgar Ramírez is far more subtle, but the beefy Venezuelan actor is given too little to do here. The best moments have Michael calling Kenny on his bluffs, telling him when he’s being corny, or that a big speech he has to give is OK. But the camaraderie between the men feels more forced than genuine.

At least in the jungle scenes, Ramírez gets to display some of his magnetism, which has been evident in films like “Carlos” and last year’s underseen “Hands of Stone.” But Hollywood still has not figured out how to take advantage of this remarkable actor’s magnificent talents, and “Gold” joins “Point Break,” “Joy” and “The Girl on the Train” as a missed opportunity in this respect.

Likewise, while Bryce Dallas Howard is relegated to the useless supportive girlfriend role. She does shine in one scene where she stands up for her man. Overhearing Brian describe Kenny as “a raccoon guarding the Hope Diamond” (a great, apt image, actually) — she goes over and toasts Brian, making him uncomfortably aware that she is on to him, even if Kenny himself is clueless. It is a brief and shining moment in the otherwise, lackluster “Gold.”

Perhaps because the film itself provides little else to ponder as it unspools, “Gold” could be seen as a parable about Donald Trump. It features a narcissistic megalomaniac (with a penchant for the title substance), who is very fond of alternative facts. What’s more, the hero uses the art of the deal to go from rags to riches and become president (and CEO) of a company — though not the nation. He uses political influence to get what he wants; he has very little concern for the little guy; and he exploits investors and foreign resources for his own profit. This notion may be completely unintended by the filmmakers but certainly comes to mind while watching “Gold.”