Midseason surprise: True to form, "Scandal" does the opposite of what we expect

Mellie Grant is poised to pull off what Hillary Clinton could not. But the D.C. of "Scandal" has a different plan 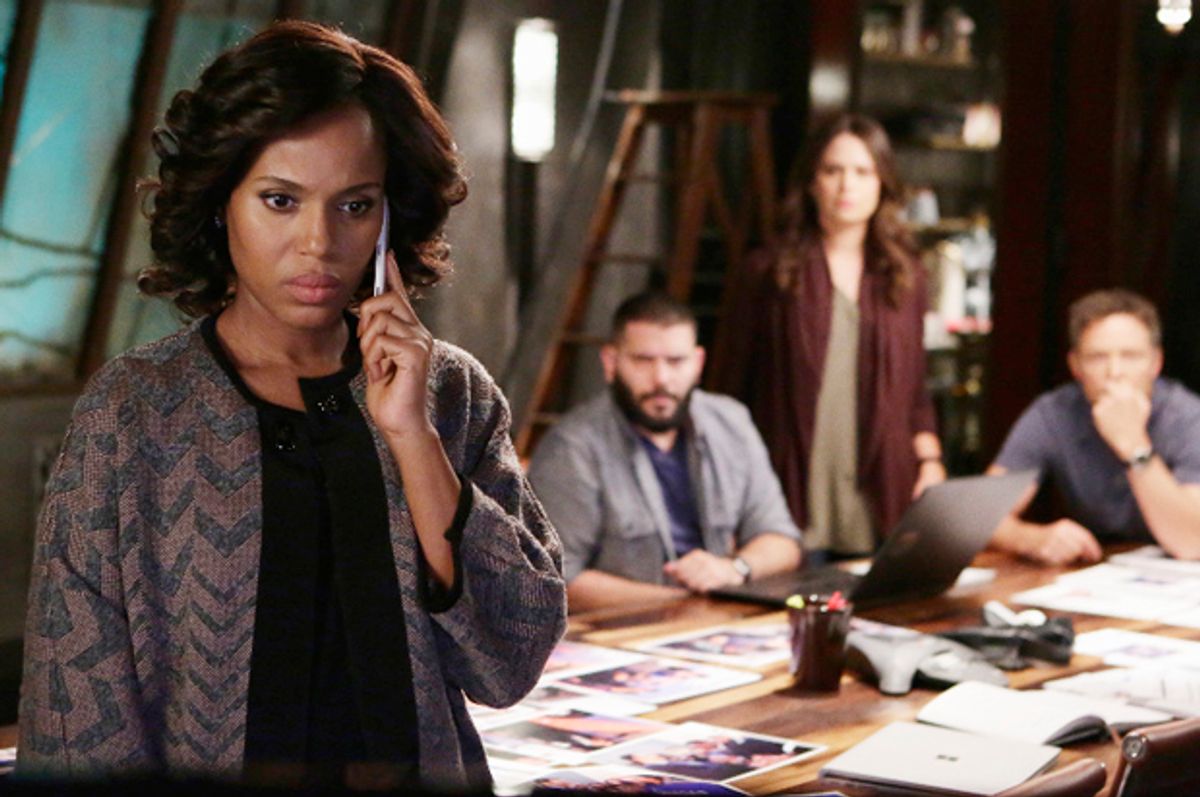 This article contains major spoilers about the season 6 premiere of ABC's "Scandal." If you prefer to keep the details top secret, stop reading right now.

Olivia Pope (Kerry Washington), D.C.’s top fixer and the hub around which ABC’s “Scandal” spins, is one of handful of operators within the nation’s political elite who can make or break presidencies. She even stole an election for her on-and-off lover, incumbent President Fitzgerald Grant (Tony Goldwyn).

In season 5, Fitz’s ex-wife Mellie (Bellamy Young) enlists Olivia to spearhead her drive to take the Oval Office; this may have led some viewers to suspect that Mellie’s victory is assured. In the real world, “Scandal” creator Shonda Rhimes is a Hillary Clinton supporter who directed the film about her shown at last summer’s Democratic National Convention. A Hillary win foretold a Mellie win, right?

Nope. Hillary was denied the Oval Office, as is Mellie Grant. “America has made its choice,” Olivia tells Mellie in an effort to get her to concede, “and it is not you.”

Just because a plot turn would provide the comfort some viewers may be craving, that doesn’t make it right, and this is doubly true for “Scandal.” Diehard fans would likely have known not to bet on Mellie — not because she couldn’t do the job, but because giving her the crown would be too easy.  That would have allowed her to lustily inhale that rarified air she confessed to having envied her ex-husband breathing.

“Scandal” is worlds away from being television’s most complex drama, but it's definitely not a simple show. Over the last five seasons, Rhimes has primed viewers to not only expect the unexpected but also to recognize that thought for the cliché that it is. Anticipate a twist; she serves up an explosion. Predict an “If X, then Y” scenario, and Rhimes will script an option that isn’t in the alphabet.

Taking all that into consideration, the victory of Francisco Vargas (Ricardo Antonio Chavira) wasn’t been much of a shocker. His win makes an openly gay man, Olivia’s former mentor and present rival Cyrus Beene (Jeff Perry), the incoming vice president. The “Scandal” electorate was set to make history regardless of the candidate it chose. Going with Vargas created challenging tension in the story, and allowed Washington and Young to bare the vulnerabilities of their characters. At first they play the part of keen political animals lording over their pack and maintaining their alpha female confidence.

And Mellie’s first reaction to her defeat approximates what I imagine Clinton may have done. She rallies the dejected troops and pledges to keep fighting. . . until Olivia delivers the tough slap of truth, dramatically pushing Mellie to make the concession call.

Lacking red wine, popcorn and a white couch to collapse onto, they adjourn to a spacious bathroom. Mellie pours herself into the empty tub, soaking her agony in Champagne swigged from a bottle she shares with Olivia, her former foe. “I will be gracious,” Mellie says between gulps, “out there. In here, I am spiteful and petty.”

Right there with you, sister.

Even in that moment Rhimes dispensed with the notion of doing what some viewers may have wanted with this alternate reality within her alternate reality: writing an entirely plausible scenario of what could happen next.

Fate tends to be unkind in the world of “Scandal.” And she definitely isn’t kind enough to favor for long a figure such as Vargas, a veteran, a loyal family man and a true centrist. He’s a pro-choice Democrat who supports the Second Amendment. He’s religious but also believes in science. And the audience will never get to find out what kind of leader he would make because he’s assassinated in the midst of his victory speech.

Fitz’s spokesman keeps news of the president-elect’s death under wraps for as long as he can, leaving the sitting president to effectively decide whether to throw his weight behind his ex-wife Mellie, the Republican nominee or Cyrus, his former chief of staff and a power-hungry schemer.

Olivia pleads with Fitz to back Mellie; in the end, he endorses Cyrus, though from all indicators Cyrus is an illegitimate president who has his former running mate’s blood on his hands. Just like in the real world, it comes down to what the Electoral College decides. And if it’s truly similar to our reality, Cyrus would have to make a gory sacrifice on live television to sway the electors into Mellie’s camp.

“Scandal” has never been about the election, any more than the series seriously examines the weight and gravitas of holding presidential office. But with this turn of events, Rhimes has set up this season as a grudge match that forces Olivia to tangle with Cyrus, a man Olivia’s dangerous father warns her is “the most dangerous predator.”

Suffice it to say, this season of “Scandal” will not serve a sunnier alternative to the real world in the way “The West Wing” was credited for doing. (Given the way the nation is going at the moment, even the presidencies depicted on “Homeland” and “Designated Survivor” seem more stable than our real one.)

Thursday’s season premiere and episodes airing over the next few weeks were written and filmed at some point between July and September. This means you’ll find no sly topical commentary in its scripts or views of what might have been.

Instead, the appeal of “Scandal” remains the same as it ever was. This a show about winning, at all cost, even though the team we’re rooting for doesn’t always come out on top. The sixth season premiere ends with Olivia and her gladiators set back on their heels.

Watching them claw their way back up will be a thrill, and goodness knows we need the escapism. And that’s precisely what “Scandal” promises at this juncture: a lengthy, satisfying battle. “Scandal” fans call themselves gladiators for this reason. Victories are attained; losses are sustained. Blood is spilled; red wine guzzled.

The takeaway in the season premiere’s final moments, when Olivia whispers her intent to expose her archenemy’s murderous deception into his ear, is that suffering a defeat doesn’t mean giving up. Sometimes it marks the beginning of a drawn-out, bare-knuckle fight, just the kind that Olivia Pope relishes.

As she walks away from Washington’s top predator, a brief smile flits across her lips, giving way to an angry snarl and determined glare. Her game face. It’s on.