Nikita Khrushchev took an unusual interest in the outcome, and two captured American airmen got stuck in the middle 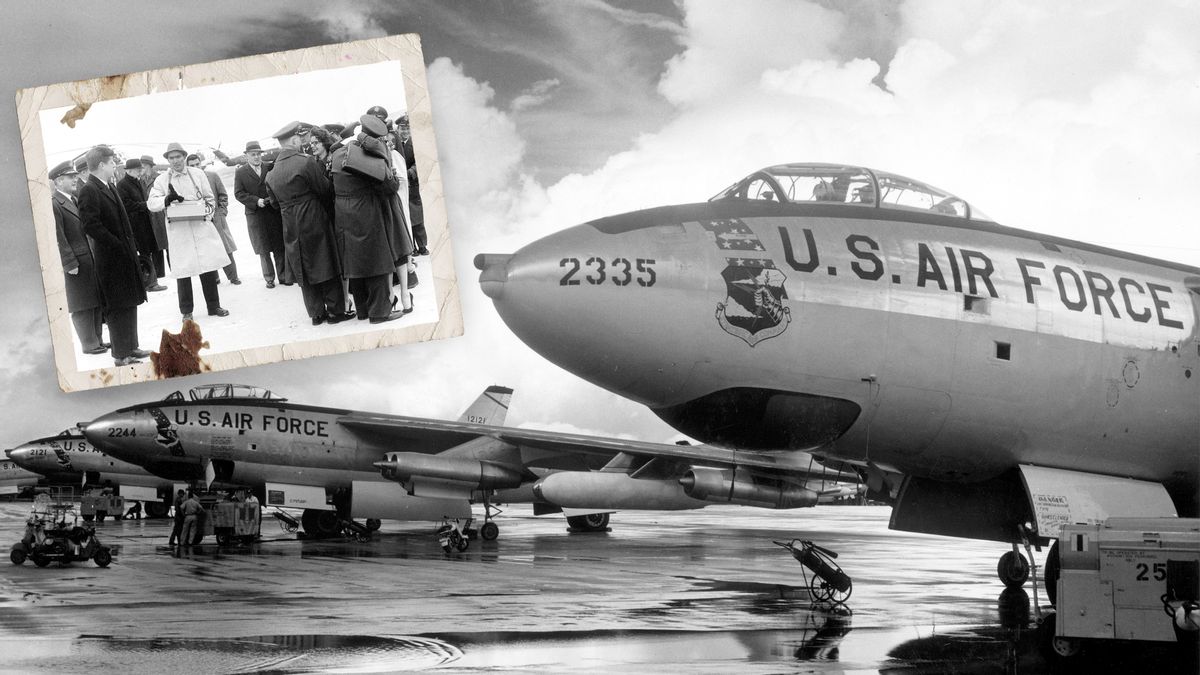 In mid-May 1962, the manor of Novo-Ogaryovo was enveloped in a fog that rolled up from the banks of the Moscow River. The house, nestled in a forest of birch and pine twenty miles outside the capital of the Soviet Union, was used by the Kremlin to entertain visiting dignitaries. That May, the guest was John F. Kennedy’s press secretary, Pierre Salinger. Salinger was 36 years old, adorned with bushy eyebrows, often complemented by a wreath of cigar smoke. His tour of the Soviet Union had paused at Novo-Ogaryovo at the request of Soviet Premier Nikita Khrushchev. It was the height of the Cold War and Salinger, who was untrained in foreign diplomacy, would be face to face with the most powerful man in the Soviet Union.

More from Narratively: "The Day I Realized I Could Never Make My Mom Grow Up"

Salinger spent three days at Novo-Ogaryovo. As one might expect of a residence that boasted five separate dining rooms, the press secretary’s visit included a feast. The delegation ate smoked salmon, caviar, black bread, beef, rice, lamb, fruit and cheese. They drank coffee, Georgian wine and Armenian cognac. They shared so many vodka toasts that Salinger felt compelled in his autobiography, "With Kennedy," to assure readers that the food was so heavy and so abundant that he never felt the effects of the liquor. He also noted that Khrushchev out-drank, out-ate and out-joked everyone else at the table.

More from Narratively: "I Thought Sex Work Would Be Empowering and Feminist. I Was Dead Wrong"

Between meals, the Premier marched the press secretary around the grounds. They motored up and down the banks of the Moscow River under an overcast sky. They shot clay pigeons on the estate’s skeet range. They tramped for miles through misty woods.

More from Narratively: "The Day Our Daughter Got Hit"

On the second day, Salinger and Khrushchev’s stroll led them to an arbor overlooking the river. They were joined by an interpreter, as well as Khrushchev’s ever-present security detail. As Salinger reported in "With Kennedy," Khrushchev’s message was simple: “Please convey to the president that I want to be his friend.” To prove this, Salinger reported to the State Department in a one a.m. telegram that Khrushchev had told him something incredible: He believed he had won the presidency for Kennedy.

To Khrushchev, the most crucial characters of the 1960 presidential election had not been the young senator from Massachusetts and his opponent, sitting Vice President Richard Nixon. The decisive pair were two American RB-47 airmen, who had been shot down over the Arctic Ocean on July 1, 1960.

That day, thirty thousand feet above the Barents Sea, John McKone noticed a strange contrail in the sky. McKone, navigator for an Air Force RB-47 bomber flying patrol over the icy northern sea, advised the pilot to shift course. In their memoir, "The Little Toy Dog," both McKone and the co-pilot, Freeman Bruce Olmstead, remember hearing a sudden exclamation over the plane’s intercom, “Where in hell did that guy come from?”

It was a Russian MiG fighter, whose pilot would later be decorated for what happened next. So close to the RB-47 that the Americans could see his face, Captain Vasily Polyakov opened fire, blazing at the RB-47’s engines until they began to burn. Smoke cascaded from the left wing as the plane went into a flat spin. Ordered to bail out, McKone and Olmstead locked their harnesses and heard the pop pop of explosions as they ejected. McKone escaped unharmed, but the force of the ejection broke Olmstead’s back. None of the other airmen survived.

The ocean water off the northern coast of Norway was thirty degrees. The surface was whipped white by the wind. After they made impact, both McKone and Olmstead wrestled loose from their parachutes, inflated one-man dinghies and clambered aboard. Olmstead had fractured a vertebra, but, according to his memoir, was more concerned with freezing to death during one of the bouts of unconsciousness that washed over him every time he moved. Icy swells alternately drenched the inflatable boats, and buoyed them up many feet above sea level. It was only when this happened, that both men could glimpse the other, lit by the midnight Arctic sun.

After several hours, a fishing trawler appeared between the white caps. McKone recognized it as Russian by the red star emblazoned on the side. McKone recalled in a 1996 CNN interview that, once onboard, he was unnerved to see that the boat was littered with the heads of fish that, just like him, had been pulled from the sea.

McKone and Olmstead were transferred to Lubyanka Prison in Moscow. The fishermen had given them Russian air force uniforms to wear; they now traded these for black shirts, workman’s pants and shoes without laces. They wore these uniforms for the next seven months. Only McKone ever changed his wardrobe; the Soviets provided him with a blue, pinstriped suit to change into for his interrogations. The airmen were about to become star players in the Cold War.

In May of that year, CIA pilot Francis Gary Powers had been shot down deep inside Soviet territory and confessed to spying. Now, the Russians were convinced that Olmstead and McKone were spies as well. They held the pilots hostage, hoping to confront President Eisenhower with one more embarrassment before he left office. To do so, they would have to break their new American spies.

Olmstead and McKone were kept in solitary confinement in dingy green cells lit by a single bare bulb. For food, they had rice, black bread and coffee — a meager ration that might be interrupted at any time by the cry of “Komissar!” — the cue for McKone to put on his pinstripe suit for his next questioning. To support his broken back, Olmstead wrote in his memoir, he was rigged in a brace that held his arms and shoulders up by chains. The Soviets moved a table and chairs into his cell and conducted his interrogations from his bedside.

“Were you ordered to cross our sea border?” they asked.

“What sort of electronic equipment was carried in the rear of the plane?”

“Will you denounce your leaders?”

In a tactic called cross hatching, the Soviets tried to convince each pilot that the other had confessed to espionage. Neither McKone nor Olmstead would concede that they had violated Soviet airspace. When the sessions were over, the interrogators practiced English with the prisoners. They argued about the Harlem Globetrotters, Paul Robeson, Charlie Chaplin and the proper usage of curse words. “His job, and he did it well,” McKone wrote of his questioner in "The Little Toy Dog," “was to get my confidence.”

The captives could write home once a week. In a letter to his wife, Olmstead wrote, “I have been told who the Presidential candidates are; maybe in your next letter you can give me the election results.”

Outside their freezing cells of Lubyanka, back in the United States, the pilots’ story shared the front pages with the general election battle between Kennedy and Vice President Nixon — the handsome, television-friendly young Senator and the seasoned Cold Warrior who claimed that only he had the experience necessary to keep the Russians in check. As the American press raged against what they saw as an illegal imprisonment of airmen, and the American ambassador created a permanent track in the snow between the embassy and the Soviet Foreign Office, Nixon reached out to Moscow personally.

“He had approached us with the request to release the crew members of the American RB-47,” Khrushchev told Salinger. “We, of course, understood that Nixon wished to make political capital out of this for himself in advance of the elections.”

But the Russians would not play ball. McKone and Olmstead were kept in their cells, and Nixon lost the presidency in one of the closest elections in American history, losing the popular vote by only 112,827 votes.

Kennedy was inaugurated on Jan. 20, 1961. On Jan. 21, Ambassador Thompson cabled the State Department with a memo from Khrushchev: “Soviet Government, guided by sincere desire to begin a new phase in relations between Soviet Union and U.S., has decided to meet wishes of American side in connection with release of two American airmen.”

“The United States Government is gratified by the decision of the Soviet Government,” the new Secretary of State wired back. “We would hope that release can be arranged prior to President’s press conference scheduled for 6 p.m. Jan 25.”

On Jan. 24, KGB agents woke McKone and Olmstead and directed them to shower and shave. They had them dress in long johns and suits, and drove them to the steps of the American embassy in Moscow. Then they drove away. The following day, Kennedy announced at the first ever live televised press briefing — an event organized by Salinger — that McKone and Olmstead were finally coming home.

It was a public relations sensation. An estimated sixty million people watched the press conference. Time magazine featured the pilots on the cover. When their flight from the Soviet Union touched down at a commercial airport in Amsterdam, they were mobbed by reporters, according to their memoir. The general feeling was that U.S.-Soviet relations might finally be thawing. In his first week in office, it seemed that Kennedy was already delivering on a rosy future. As Khrushchev told Salinger when they met the following year, that was his plan exactly.

The Russians had no case against McKone and Olmstead, who refused to confess. Despite this, Khrushchev intimated to Ambassador Thompson in September that he would no longer negotiate the RB-47 pilots until a new administration had been sworn in. Khrushchev, guessing that early release of the pilots would reflect too well on the sitting Vice President, drew out their imprisonment to deny Nixon the win.

From Khrushchev’s point of view, an inexperienced, optimistic young senator was the preferred resident of the White House when compared to Nixon, the Cold War veteran who had bested Khrushchev in the 1959 Kitchen Debate. As Khrushchev explained to Salinger, he was “determined in his mind that Kennedy would make [a] better President,” so the head of the Kremlin did what lay in his power in order to put him into office.

A year and a half later, perched above the river at Novo-Ogaryovo, Salinger marshaled his diplomacy to react to Khrushchev’s claim. “I responded,” Salinger remembered, “that the release of the RB-47 fliers before the election might very well have won it for Nixon.”