One small step on the long march to freedom: This weekend, I will not say his name

Sunlight cannot harm him; hatred only makes him stronger. Who do I mean? I forget! Let's talk about something else 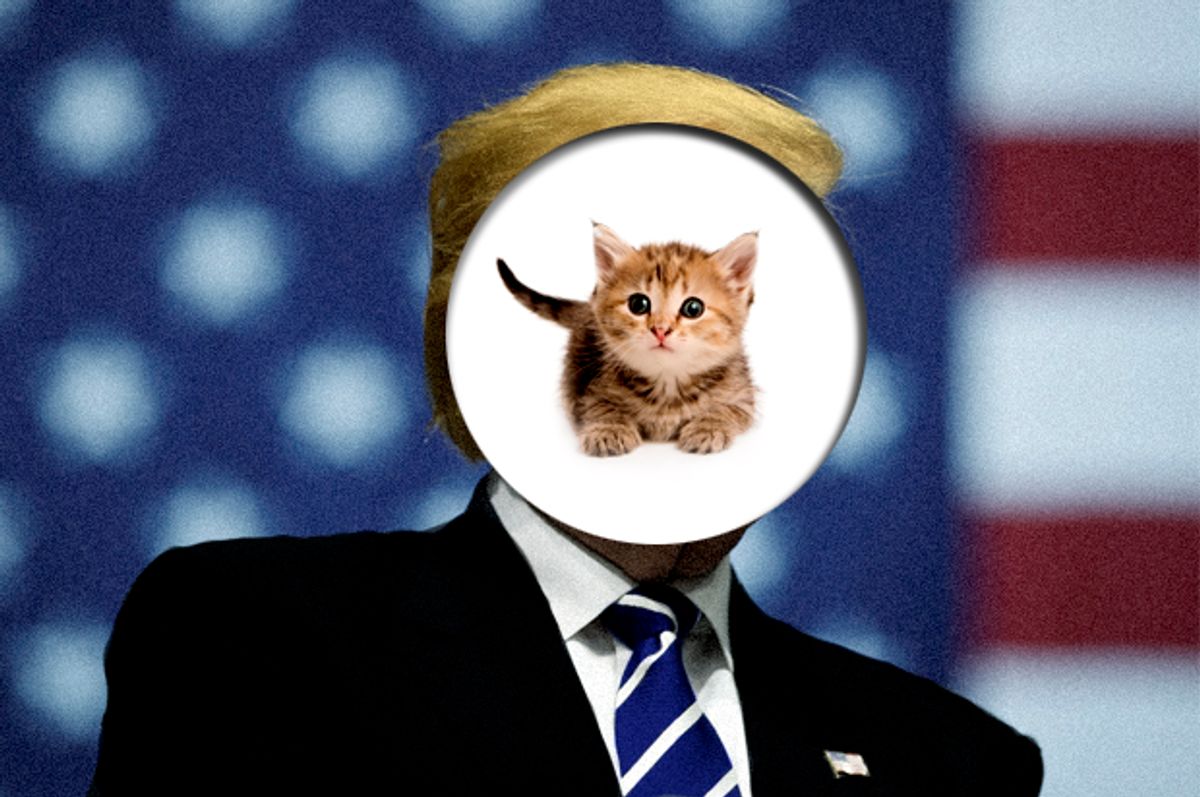 “History is a nightmare from which I am trying to awake,” says Stephen Dedalus, in the most famous quotation from James Joyce’s “Ulysses.”

Replace “history” with a one-syllable proper noun, a name that no doubt appears several times on the home page of Salon adjacent to this article — and appears thousands of times every day, on virtually every imaginable news site or publication on every continent and in every language — and you capture a widespread sentiment of the past week or so.

Well, I am here with an important message: Dreamers of the world, awake! You have nothing to lose but your mental chains. You have forged them yourselves, and they can be broken more easily than you imagine.

This weekend, at least, I will not use his name in print. You know who I mean. I will also make a good-faith effort not to say his name out loud, but that may be too ambitious. It is a small, symbolic step, meaningless in itself. But it feels like the beginning of something. It is a tiny moment of personal liberation, one I now realize I have been struggling toward for many weeks: my own microscopic version of the Great Refusal, or a self-created Temporary Autonomous Zone. But if 21st-century humans can agree on anything, we agree that symbolism can shape reality, and that the personal is political. Here’s another thing we can agree on: This person I refer to really does not want to be ignored.

I am not kidding myself, by the way, that refusing to say someone’s name is the same thing as ignoring him. I am clearly not doing that. But every march to freedom must begin with a single step. As with Lord Voldemort, one can argue that turning his name into a fetish object only gives him more power. In this case, I’m not sure that’s true.

This particular dark wizard thrives on attention of all kinds: the adoration of his followers, the hatred of his enemies, the prurient fascination and/or sober scrutiny of the news media. Most of us assumed that sunlight would destroy him, as it does mold and vampires. But exposure only made him stronger. Or we believed that mockery and strident opposition would cause him to melt, like a birthday cake left outside in a deluge. But that only baked his frosting to a hard shell, and caused his followers to cling to him fervently as to a persecuted martyr.

So let us instead begin the process of denying this person — the ultimate embodiment of America’s tendency toward malignant narcissism — the attention he craves. It’s a bit late in the day for that, I recognize. I am not suggesting that anyone who holds out hope for the future of the United States of America can afford to retreat into aesthetics or spirituality or private life. I am, however, saying that those things are a crucial part of any resistance movement.

Opposition cannot be a purely negative force or it will suffocate itself, a longtime hazard of left politics. It must also be visionary, imaginative and constructive. Another world is possible, as the anti-globalization activists of the early 2000s told us. The world we must imagine, and thereby make possible, is a world in which You Know Who does not matter, and ultimately a world in which he does not exist. Depriving him of light and oxygen however and whenever we can is an important first step, but the real point is not destruction but transcendence. Time and history and humanity and love and art are large. That person is small and soon he will be gone.

This is beginning to sound precious. So let’s be clear that we are talking about the real world, where this person has risen to power under unlikely circumstances and has issued a torrent of bewildering and terrifying edicts over the course of the past week. I can hear various of my colleagues reminding me what the consequences of those edicts are likely to be for real people who are already marginalized or persecuted. It is worse than most of us expected, by a lot, and I am reminded once again of Russian-American journalist Masha Gessen’s warning, two days after the November election: “Believe the autocrat. He means what he says.”

That person whose name I am not saying is threatening to bring back the torture policies that shamed our supposedly exceptional nation in the eyes of the world, in defiance of everything his national-security nominees said to Congress. He is threatening to deport millions of undocumented immigrants on vague and arbitrary legal grounds, in the process turning local and state law enforcement into de facto citizenship cops. He is threatening to bar all refugees, immigrants and visitors from a laundry list of majority-Muslim countries — unless, that is, they happen to be Christian. He is threatening to investigate the thoroughly imaginary problem of “voter fraud,” either to distract us from the real story of what happened beneath the surface of the 2016 presidential election or to enable the widespread disenfranchisement of black and Latino voters, or both.

I could go on, but toward what end? I do not think this person will actually send federal troops into Chicago or find a way to keep Chelsea Manning in prison, and I suspect that his open warfare against federal employees and his Great Imperial Wall won’t end well for him. But nothing can be ruled out with this person, and none of that is the point. To the extent this idiot savant of social media has a strategy, or that the parasite inside his brain known as Steve Bannon does, it involves drowning the opposition beneath a flood-tide of propaganda and, beyond that, compelling us all to talk and think about nothing but him.

Obsessing over the hypothetical details of his purposefully unclear policy proposals, or bickering about which of his noxious ideas is most urgent and most dangerous, is exactly what he wants. It exaggerates his power, and feeds his limitless vanity. That makes him seem much larger than he really is, when the real task of the moment is to reveal his smallness and insignificance.

As the whole world has learned from an onslaught of “alternative facts,” this person and his so-called movement represent the spectacular return of a long-term strategic goal of authoritarian politics: to undermine reason and to throw into question the nature of reality. Hitler promulgated the bogus racist pseudo-science of eugenics, Stalin perverted both art and science in an effort to build “proletarian consciousness” and Kim Il-sung simply replaced all forms of actual thought with “Kim Il-sung thought.”

This new variety of Voldemort thought is dangerous too, but only as dangerous as we allow it to be. We can resist this person and oppose his apparent agenda, and it is critical to do so. We can stand with Muslims and immigrants and women and LGBT people and others who are under threat, and even at this early stage the response and the solidarity have been heartening. We can stand for human rights and civil liberties, for the rule of law and rational inquiry and freedom of speech, all of which this administration would like to subvert or distort. But we will do all that more effectively if we do not obsess about That Guy 24/7, if we refuse to nourish him with our hatred and our fear, if we do not let him hypnotize us with his own delusions of grandeur.

We will resist him best as we also begin to transcend him. I am speaking to myself, of course; I typically edit as many as a half-dozen stories a day about that person, and have written thousands of words about him myself. Toward what end? I am genuinely not sure. Throughout it all, like so many other people, I have constantly cast around for escape or shelter or an alternative framework that might make sense of what was happening.

I have watched “Atlanta” and “The Man in the High Castle” and a French cop show called “Spiral.” I have read biographies of Hitler and Trotsky, which I do not recommend as a combination but which at least reminded me that things could get worse. I have read random poems by Shelley and Rilke and Walt Whitman and Gerard Manley Hopkins, which seemed to help while I was doing it. (Maybe that’s just me.) I have listened to music every day, almost indiscriminately, in search — as I see it now — of moments that would pull me out of time and space: a Lester Young solo, Leonard Cohen’s apocalyptic growl, the climax of a Mahler symphony when a bunch of people playing violins seem to touch the infinite.

I know: It's banal advice. Listen to music, take a walk in the quiet winter forest, spend time with people you love. None of that stuff is enough to solve our national (and global) crisis. But it's critical anyway; it creates space free of You Know Who (I nearly broke my own rule there) where other things can happen. Ignoring that person will not make him go away, as in a fairytale. But it begins to break his hold over us, and deprives him of what he most craves. It is an essential aspect of resisting and overcoming him. We begin to build the world we want by focusing on the things that matter. Join me this weekend: Don’t say his name.