Opiate for the Masses: The dog days are here again with "Puppy Bowl," "Spy in the Wild" and a famous kitten

Calm your troubled nerves with puppy love, robot animals and the world's most beloved single lady 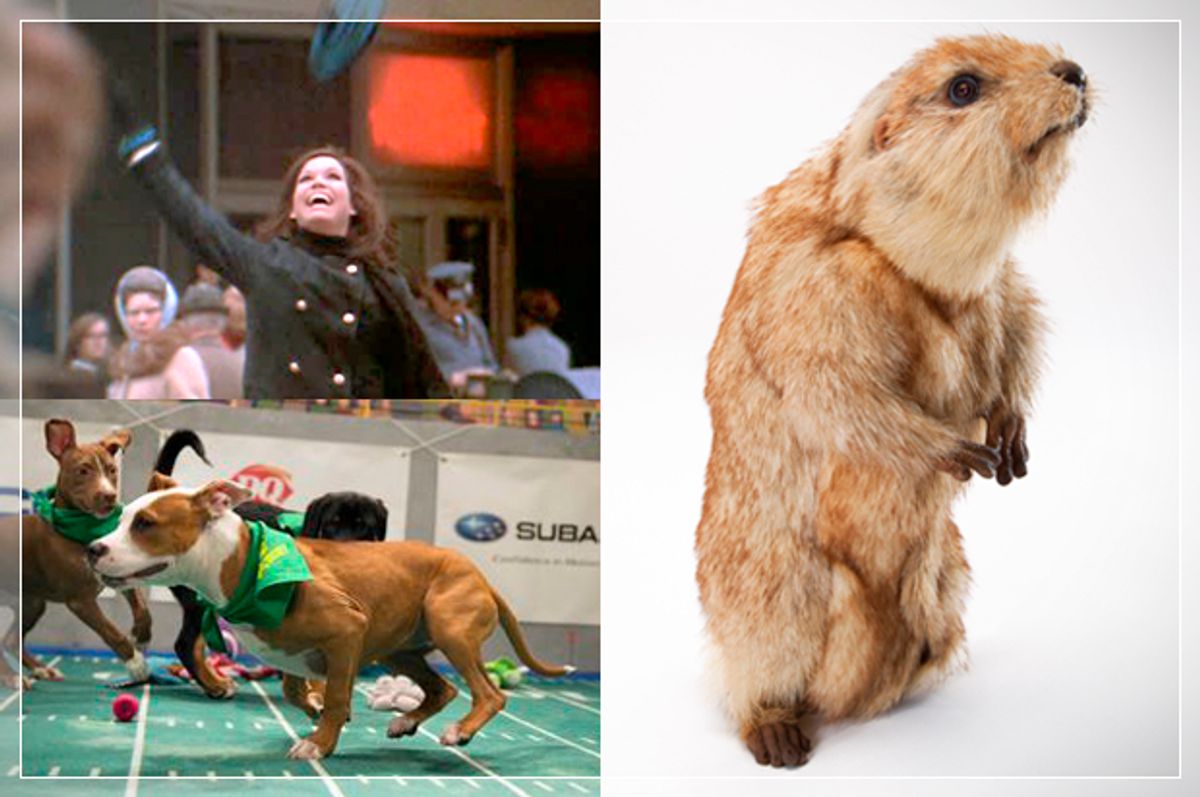 “I know when I do good speeches. I know when I do bad speeches. That speech was a total home run. They loved it. . . . They gave me a standing ovation for a long period of time. They never even sat down, most of them, during the speech. . . . And you and a couple of other networks tried to downplay that speech. And it was very, very unfortunate that you did.”

Sleep-deprived? Stomach tied in knots? Has anxiety halted all transit and deconstruction in your body’s keystone pipelines? You are not alone.

Nearly three in five Americans are currently suffering from some form of Freaking the Hell Out, that hmm, not-so-fresh feeling that the world as we know it is on the verge of bursting into a demonic conflagration. The remainder of the sample consists of deceased illegals registered to vote in several states, and smart, very smart people, it's not a problem, who are too busy winning to worry about anything else.

Symptoms of Freaking the Hell Out range from stoic but furious head-shaking while fretfully tweeting and retweeting alarming developments, all the way up to full-blown Shia LaBoeuf. Such discomfort is impairing our very ability to live to our very fullest — a right guaranteed in the Constitution!*

Fortunately there’s hope. Introducing Opiate for the Masses, our new prescriptive for the distraught, spiritually constipated television viewer. Here’s how it works!

Using our patent-pending ayurtelevedic methods,* OFTM allows that ball of fat and neurons inside your head bone to power down, optimizing healing by dosing your brain with candy. Some OFTM programming may improve your knowledge base. Some will make you feel a little ashamed of yourself, because we have to keep you honest. The goal of every OFTM selection is to soothe away your troubles via endorphins, serotonin and, from time to time, just the right doses of palate-cleansing duuuuuuuuuuuuh.

Studies* show that regular OFTM users experience temporary sedation and respite from despair.  Give it a try today!

There may be no surer way to interrupt and abate a person’s rage cycle than to show her a photo of a kitten or puppy. That makes next weekend’s “Puppy Bowl,” now in its 13th year, a public service, and the people who make it happen goddamn national heroes.

I shouldn’t have to explain how “Puppy Bowl” works, but here goes: Seventy-eight clumsy, adorable dog toddlers, including the annual event’s largest number of disabled canines, are released into a stadium-shaped pen in waves and enticed by an assortment of toys. They tussle. They wrestle. They consider the perfume of each other’s butts.

Then at some point, one of them grabs a toy and crosses the goal line. Everyone celebrates, except for the dogs, whose thoughts probably go no deeper than, “There’s a serious lack of dirty tissues to eat around here.”

Besides providing safe harbor to viewers hiding from Super Bowl enthusiasts, the purpose of “Puppy Bowl” is to raise awareness about pet adoption. This year’s canine contenders represent 34 rescue organizations that hail from 22 states, and as in years past, many will have been adopted before the event airs.

Watching these tiny tiddly wumps play and play and play for hours on end is comfortably analgesic. Animal Planet loops each “Puppy Bowl” broadcast until 2 a.m. East Coast time, until its viewers dissolve into a cooing pool of gelatin. Doesn’t that sound nice?

The actual “Puppy Bowl” doesn’t take over Animal Planet’s schedule until Sunday, Feb. 5, starting at 3 p.m. ET. But over the years the cable channel has found new ways to extend the “Puppy Bowl” magic for as long as possible. You can start dosing this very night with the first of its “Puppy Bowl: Inside the Bowl” minute-long interstitials, airing at 8 p.m. every night until the big game.

Beware – the withdrawal symptoms are devastating. Worry not, we have a supplement for you!

People watch nature documentaries for a lot of reasons, but the two most popular are the dramatic life-and-death struggles and the awkward humping. Few visions are more entertaining than animal carnality, a notion that colors the first episode of Nature’s five-part series “Spy in the Wild.”

Nature cinematographers embed 30 small “spy cams” inside lifelike animatronic animals ranging in size from alligator hatchlings to an orangutan in order to surreptitiously record animal behavior close-up. Gimmicky? Totally. But the unobtrusiveness of the cameras also grants viewers rare glimpses that otherwise would not be seen, including the inside of a female alligator’s mouth as she gently transports her newly-hatched young from shore to river.

That’s great and all, but what people really want is to witness sweet animal lovemaking, especially if it helps make that awkward conversation with the wee ones a little easier.

The series premiere is titled “Love” and explores the idea that animals can display emotions and behavior similar to humans. Among the series' fascinating discoveries: penguins can be total bastards, monkeys hold funerals, and prairie dogs enjoy making out all day, just because it feels right. The piece de resistance, however, has to be the scene where a spy turtle gets a bedside view of two turtles getting freaky-deaky, clanking together like a pair of randy bicycle helmets.

And that's before Mr. Shelly starts engaging in urgent, hungry coitus with the camera, which, to be fair, is quite an attractive facsimile of a tortoise — a seven, at least. Side effect: The male's romantic vocalizations will haunt your dreams.

Anyway, one of these a week for five weeks starting Wednesday at 8 p.m. (check your member station’s schedule) will keep you even, kid.

In summary, you will be gradually acclimating your system to enjoy life again with regular small doses of puppies, followed by a midweek hit of penguins and sex-crazed turtles, all of which lays a solid base to handle next Sunday’s surge of despair-banishing adorableness.

To balance out your system, plop your depressed loins down in front of SundanceTV for an all-day marathon of “The Mary Tyler Moore Show,” specifically every one of the final season’s 24 episodes, starting at 6 a.m. ET. This provides a healthy infusion of superior TV writing, heartfelt acting and an uplifting portrayal of what life as an independent woman can look like -- and each half-hour ends with a shot of that MTM kitten.