What will Gaga deliver? Pro-LGBT singer may unload on the new president and his lieutenant

Gaga has a reputation for provocation: She may earn it again at February's Super Bowl 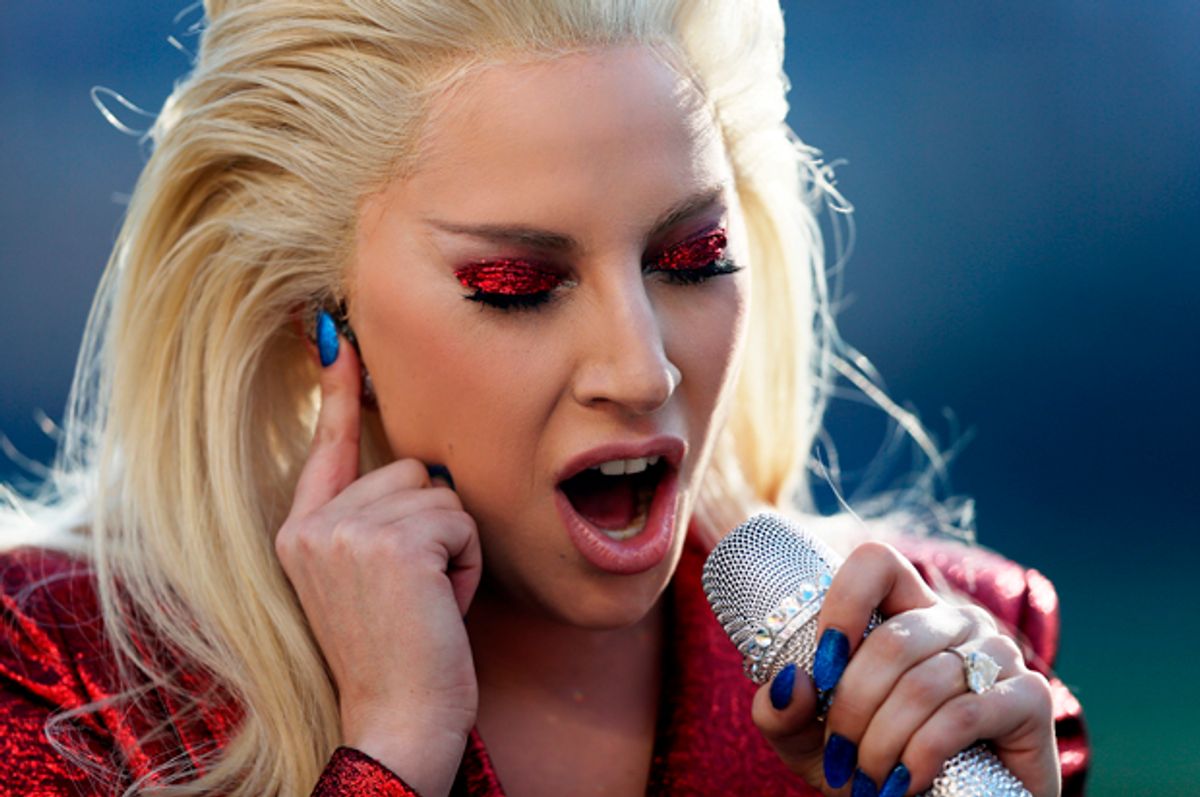 The nation’s on a knife’s edge with the election of a divisive president who lost the popular vote by one of the largest margins ever. More than 3 million protestors took to the streets of Washington, D.C., Los Angeles, Portland, Oregon, and many other cities. Angry, accusatory rhetoric flies in both directions.

Good thing the Super Bowl will arrive in a few weeks to allow Americans of all colors and creeds to kick back and watch New England and Atlanta kick and run and tackle.

Only one thing stands in the way of an easy-going gathering built around big-screen TVs, American beer, Buffalo wings and Fiesta dip: Lady Gaga.

Because Gaga, who’s headlining the halftime show, could very easily pull a Meryl Streep. She of the “meat dress,” her support for LGBT rights, and her overall left-of-center, anti-authoritarian stance. Rumors have circulated that Gaga was gagged by the NFL, though the organization has denied they have tried to muzzle her.

NFL football, of course, has had a right-leaning cast for a long time. Between the state universities from the Deep South and Rocky Mountain West that provide the players, the martial metaphors that animate the sport’s language (“air attack,” “ground game,” “blitz,” “behind the line,” “bomb”), team ownership (mostly old rich men), and the fans (heavy on, though not entirely, macho dudes), pro football games are as red-state a celebration as the Oscars are a blue-state one. Some years, the entertainment has been Up With People and other forced-smile America-is-Awesome fare.

This hasn’t kept protest or lefty politics or controversy out of the halftime show. The Justin Timberlake/Janet Jackson “wardrobe malfunction” during his song “Rock Your Body” at the 2004 Super Bowl, and Beyoncé’s Black Power-inspired “Formation” performance last year introduced a bit of chaos and confusion into things.

So what can we expect from Ms. Germanotta?

Gaga has been pretty clear about her allegiances. She’s spoken about her own sexual assault and been active in the survivor community, supported Hillary Clinton in a full-throated way, and called Trump “dangerous man” who divides the country with hate and fear. Her whole business model involves being provocative.

So it’s pretty hard to imagine Gaga just showing up in a cheerleader uniform, singing a few songs about heartbreak and the joys of being young, and heading home. More likely is a rant or even a well choreographed speech or spoken-word performance.

Will she change minds? Were Gaga speaking at the Grammys or Oscars or to a meeting or the Academy of American Poets, it would be unlikely that she would persuade a lot of people toward liberal tolerance and opposition to a leader whose playbook seems inspired by George Wallace and Mussolini.

But if Gaga rants and rails at the Super Bowl, maybe her words and gestures will get through. There is an old term from ’50s television where hosts would thank audiences for letting them “into your living room.” Halftime at Super Bowl LI may become a case where many beer-drinking red-state fathers wish they never had.