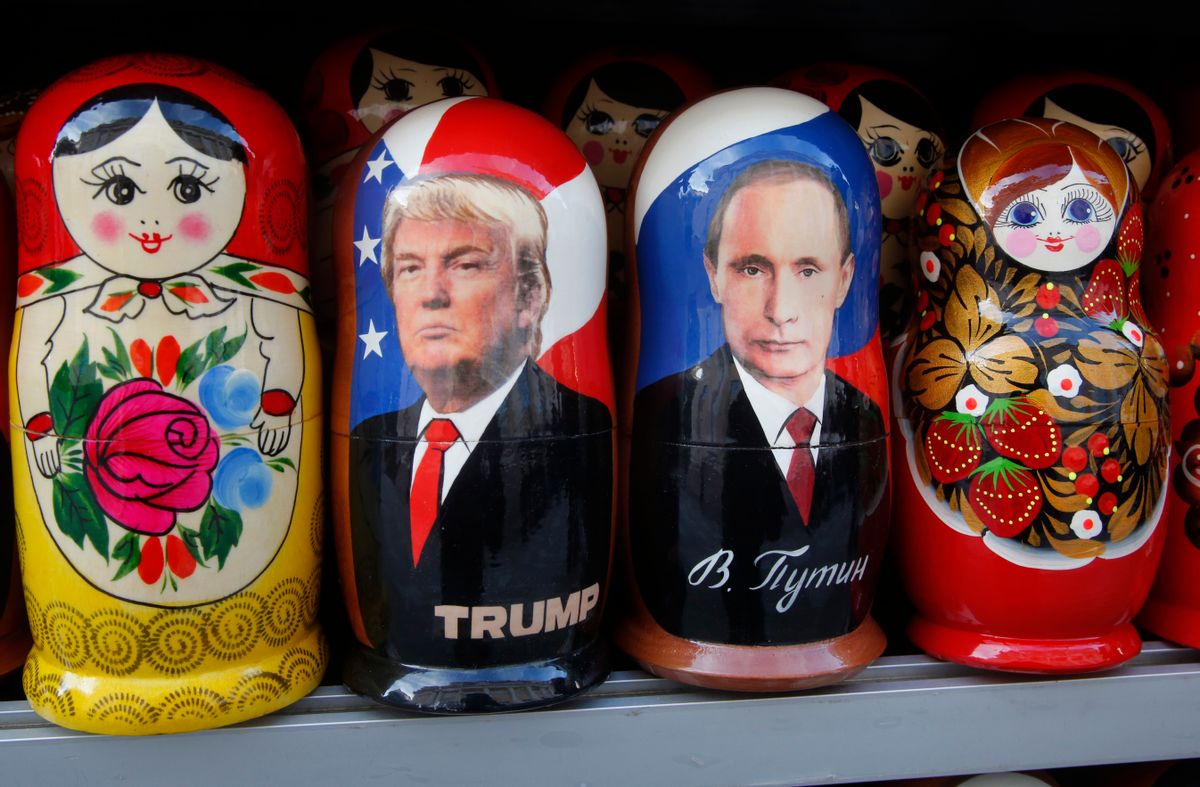 Energy has long been used as a tool of U.S. foreign policy, particularly in the Middle East. But it’s true in other regions and countries as well, most notably Russia, where President Donald Trump is pondering another possible “reset” in relations.

This will be the fourth such attempt at a relationship reboot with Moscow since the disintegration of the Soviet Union began in 1989. And each time — in 1993, 2002 and 2009 — renewed investment by the U.S. oil and gas industry played a role in trying to improve ties. And each effort failed for a variety of reasons.

With the U.S. relationship with Russia once again high on the White House agenda amid Russian overtures and intensive attention to the ins and outs of Russian hacking, it’s worth taking a closer look at these past roles the U.S. energy industry has played in efforts to pursue warmer ties with Russia. Trump would be wise to heed this history, especially since oil always looms large in the bilateral relationship.

The U.S. oil and gas industry is widely considered one of the most technologically advanced in the world, having pioneered fracking techniques as well as other advanced technologies needed to drill in Russia’s harsh Arctic terrains and to liquefy natural gas for easy shipment.

And for decades, the United States has sponsored trade missions that use oil and gas investment as a way to persuade other countries to adhere to American interests. Examples include disarmament in Kazakhstan and Libya, conflict resolution in the Middle East and Latin America and nuclear nonproliferation and the fight against terrorism in the former Soviet Union and West and East Africa.

On the flip side, denial of access to American know-how has been wielded as a stick against countries that defy the U.S.-led international order: for example, by sponsoring terrorism (Iran and Libya) or invading neighboring countries (Russia).

The opening of Russia’s oil industry to American companies began shortly after the collapse of the USSR. A 1993 summit between leaders of both countries led to the creation of the Gore-Chernomyrdin Commission to promote Russo-American economic and technological cooperation, including in energy.

The United States, in essence, was offering up its companies to assist Russia in revitalizing its energy industry. ConocoPhillips was an early adopter with its Polar Lights project, which began in 1994 amid the euphoria of U.S.-Russia collaboration. But the company soon became a victim of Russian bureaucratic hassles that hampered its ability to export oil.

Other U.S. companies that followed suffered similar fates as that early optimism was met with myriad legal, regulatory and logistical difficulties that eventually turned profits into losses in some cases.

Such failures mirrored the difficulties on other policy fronts that eventually beset the Gore-Chernomyrdin deal and subsequent U.S. arms control initiatives as the Kremlin failed to honor both the letter and spirit of agreements.

While this experience clearly illustrates the dangers of being lured by unfulfillable promises and misplaced optimism when it comes to Russia, the United States had a hard time learning this lesson.

In the aftermath of the Sept. 11, 2001, terrorist attack, the U.S.-Russian energy dialogue again gained momentum after newly elected Russian President Vladimir Putin let it be known that Moscow was willing and able to help diversify global energy supplies away from the troubled Middle East to help the United States.

It was in this context that several U.S. oil companies, including ExxonMobil, expanded their exploration and production deals in Russia. In May 2002, President George W. Bush and Putin initiated a new high-level dialogue that led to an energy summit in Houston, Texas, in October and new oil and gas investment deals.

But all was not smooth sailing despite what seemed to be initially an auspicious geopolitical backdrop. No sooner had billions of dollars been committed and oil started to flow than Putin initiated a change of political course in 2005 that defined Russian national security as better served by renationalizing the oil and gas industry.

And so U.S. oil companies experienced similar reneging and renegotiations, as well as threatening tactics directed from the Kremlin, which in some cases included outright arrests of partners and the taking of assets.

The Kremlin used a variety of means to “convince” its foreign partners to turn over assets to favored firms whose leaders were positioned inside Putin’s inner circle. Disputes over back taxes and other kinds of trumped-up environmental or criminal charges were used to justify the retaking of assets. Approvals for access to export pipelines were often linked unofficially to selling stakes back to Russian entities.

The pressures on oil industry executives trying to do business in Russia was so intense at least one American-born senior executive of a major multinational company was forced into hiding. In another example, in 2004 the Russian government effectively annulled a tender award ExxonMobil had won in 1993 for exploration rights in the Russian Arctic region of the Sakhalin Islands and requested over a billion dollars for a new license to operate there.

Perhaps the most famous effort at a reset with Russia came in 2009 shortly after President Obama took office, when then-Secretary of State Hillary Clinton gave her Russian counterpart an actual red button with the word “reset” written on it.

While the Obama administration did not explicitly make energy cooperation a diplomatic carrot, the effort did improve the situation for a few American oil firms like Chevron and ExxonMobil — at least temporarily — as Russian interest in developing technically challenging Arctic oil and gas resources increased.

As we all know, the Obama reset ran aground as other geopolitical disagreements, such as Russia’s invasion of Ukraine in 2014 and its military intervention in Syria’s civil war, overshadowed the relationship. The United States and Europe placed sanctions on Russia in 2014, creating losses anew for U.S. oil companies.

In the end, most American companies such as ConocoPhillips and Marathon Oil have chosen to sell their holdings in Russia and exit completely in recent years. Others, like ExxonMobil, have reduced risk by participating in international consortia involving important Russian and international firms.

ExxonMobil, for example, eventually secured its multi-billion dollar deal in the Sakhalin Islands by partnering with Russian oil giant Rosneft and several other foreign firms. Still, the venture has faced many obstacles, including tax disputes and logistical problems.

Lessons for the United States

There is no question that this history of triumphs and failures offers important lessons for the oil industry and the Trump administration.

In all three efforts, American diplomats and oil executives alike focused on discussions about long term win-wins, while the Russians goals were more limited and short-term.

The first lesson is that Moscow can be quick to offer an accommodating posture when it needs something, such as money or advanced technology, but that this is not necessarily reflective of a permanent change in vision. One savvy American oil company chairman once confided to me that the CEO of his Russian counterpart in a joint venture spent nearly all of his workday canvassing the halls of the Kremlin to intercept early changes in policy or internal political power shifts.

Right now, for example, Russia desperately needs the sanctions on its economy removed. The history suggests Trump probably shouldn’t offer any relief until Russia has brought substantial concessions to the table on issues such as nuclear weapons, cooperation on ISIS and Syria, and ongoing hacking threats.

Secondly, a position of strength will facilitate a deal faster than an accommodative posture or natural alignment, as Rex Tillerson, the newly confirmed secretary of state and former chairman and CEO of ExxonMobil, knows from first-hand experience. Oil companies that approached Russian leaders with talk of technology transfer and technical expertise were not necessarily those that excelled against the political winds in Moscow. Rather, companies posing a strong competitive market challenge to Russian counterparts such as Rosneft fared better than the rank and file, many of whom have been forced to abandon Russian assets over the years.

ExxonMobil is an example of the success of this strategy. After lengthy negotiations with Rosneft seemed to be getting nowhere, ExxonMobil mounted an assertive campaign to challenge that company in key markets such as Eastern Europe, Germany and China by offering its customers competitively priced, alternative supplies. The tenor of the talks with Russia improved after that, leading to an expanded strategic agreement (read: truce) in 2013.

As the Kremlin tries to woo yet another incoming U.S. administration, Moscow expects to count on what it considers the “greed” of Big Oil to help it end the sanctions strangling its economy and to attract fresh investment in its energy industry.

But perhaps this time around, the U.S. government and the Western oil industry will more accurately view Russia as a wolf in sheep’s clothing and greet the overture prepared with its own gun in hand: U.S. shale exports, which provide competition for Russian oil and help prevent diplomatic strong-arming.

The new administration has already positioned itself to use this lever, perhaps evidence that Trump could be the negotiator-in-chief he has promised to be.

Amy Myers Jaffe is the executive director for energy and sustainability at the University of California, Davis.