Jack's not back, but the outdated structure that governed "24" is, with engaging new lead. Can he get the job done? 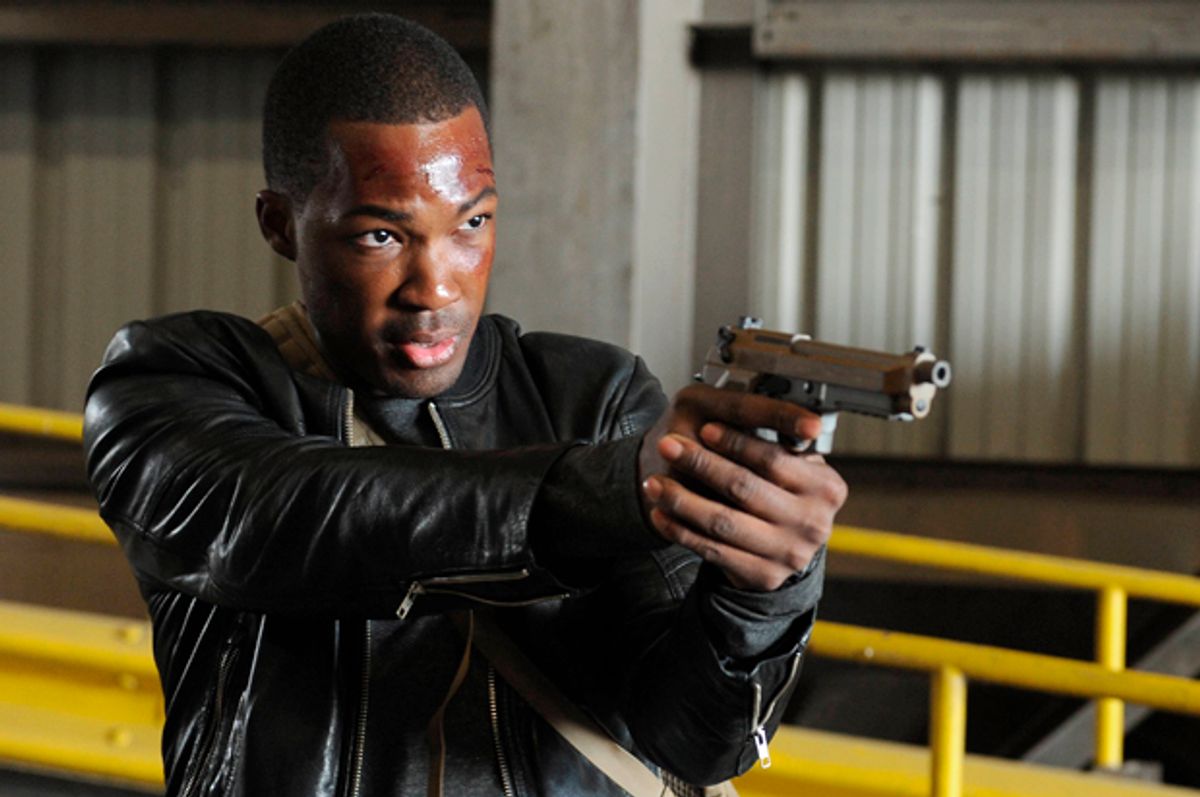 Amazing, the way Fox’s “24” franchise seems to jump onto our radar just in the nick of time. Here we are at the dawn of a new administration, led by a president who is under the mistaken impression that torture works, and has casual conversations with his cable news hype man about waterboarding.

The original “24,” the one with Jack Bauer (Kiefer Sutherland), served up brutality as entertainment. In the franchise’s reboot, “24: Legacy,” it’s the terrorists who torture the heroes. A group of retired Army rangers are being picked off one at a time by Islamic extremists loyal to an assassinated terrorist leader, until they get to Eric Carter (Corey Hawkins). With a few gutsy moves and a storm of bullets, he escapes them and kicks off the most action-packed day of his life.

What is the enemy's nefarious intent? That's yet to be determined. All Carter knows is that he has to run.

Premiering on Feb. 5 after the Super Bowl, the opening episode of “24: Legacy” takes place between 12 p.m. and 1 p.m. Creators Manny Coto and Evan Katz, who served as producers on the original “24,” haul out the same split-screen action shots and signature beep-WHOMP, beep-WHOMP countdown clock meant to sustain that “real time” malarkey.

The central mission of “24: Legacy” is uncomfortably in tune with the current administration’s vision of the threat of extremism – and, alarmingly, still informs the president’s idea of how to fight it, even though the sadism Bauer used to magically get information has vehemently been condemned by government officials.

The “24” franchise is not known for maintaining any shred of realism, and “24: Legacy” does little if anything to correct that. Nobody has issues with crosstown traffic, experiences dizziness resulting from blood loss or has to answer nature’s call. Like Jack Bauer before him, Eric Carter never gets hungry or thirsty and has a high pain tolerance. He can sustain multiple blows to the head, yet when he points his gun, his aim is always true.

One legacy “24” left in its wake is that other dramas about specialized government agents strive for a measure of authenticity. This is not universally the case; the primary focus of ABC’s “Quantico” (airing Mondays at 10 p.m.) and its heroine Alex Parrish (Priyanka Chopra) are its action and conspiracy elements.

That Alex was an FBI recruit (who became an agent for the FBI, then the CIA, and. . . you get it, she’s versatile) provided the story a bureaucratic structure for her to navigate, as well as an explanation for her combat skills. Now she’s assisting the government with a hostage crisis at the show’s G-20 summit, where the First Lady has been beheaded. (The gig is not going well!)

History’s “Six,” in contrast, is inspired by actual Navy SEAL Team Six missions and follows members of the outfit two years after they complete a covert mission to eliminate a Taliban leader in Afghanistan. The first two hours of the eight-episode first season, airing Wednesdays at 10 p.m., depict the strain that accompanies balancing civilian life with a job that requires regular deadly confrontations with some of the most dangerous people on the planet.

We have to mention Showtime’s “Homeland,” currently airing Sunday at 9 p.m. and a direct descendant of “24,” which was created by the Fox series’ executive producers Howard Gordon and Alex Gansa; Gordon also serves as an EP on "24: Legacy." Six seasons in it consistently renews itself by allowing its heroine Carrie Mathison (Claire Danes) to evolve into new roles, shaped by the crucibles of her duty to the intelligence community, loyal friend and mentor Saul Berenson (Mandy Patinkin), and her navigation of her bipolar disorder.

“Homeland” and “Six” present vastly different approaches to portraying the inner working government intelligence and special operations, thoughtfully exploring the physical and emotional toll sustained by the men and women who serve.

The comparably frothier “Quantico” bears many more similarities to “24” in terms of its emphasis on heightened scenarios, but even it feels updated in comparison to the format of “24: Legacy,” which feels barely changed since the series first premiered in 2001.

If the “24” franchise must continue -- which, again, is up for debate -- recruiting a hero like Hawkins’ Carter is the best choice producers could have made. Carter doesn’t have the miles on him that the grizzled Bauer did, so he’s not yet cynical about the government that sent him off to do special ops in Yemen. Said mission was spearheaded by Rebecca Ingram (Miranda Otto), the former national director of the fictional Counter Terrorist Unit.

Neither does he have to worry about any children wandering into cougar traps, although circumstances force him to stash his wife Nicole (Anna Diop) with his gangbanger brother Isaac (Ashley Thomas) so he can protect her. And that’s pretty much the same deal, isn’t it?

Maybe you’ve been missing such action-packed ridiculousness; if so, your ability to keep a secret is commendable. But in truth, the addition of “24: Legacy” to the schedule has less to do with fans clamoring for another chapter than the fact that the franchise’s producers saw an opportunity to jump in on last year’s pervasive reboot trend.

Never mind that “24: Legacy” relies on a framework that’s 16 years old. Never mind that characters make ludicrous decisions that defy a fifth grader’s logic expressly for the purpose of putting Carter into lethal situations that could be avoided by making one phone call. Pay no attention to the fact that its multiple subplots -- at least five, including the aforementioned wife-in-peril business -- are weak threads that don’t show signs of untangling into something remotely useful or fascinating.

For that matter, let’s completely disregard the fact that “24: Legacy” is basically the same old show with a different actor who deserves serious consideration. As far as we know, Agent Bauer is giving Vladimir Putin shiatsu massages somewhere in Russia (he was last seen surrendering to that country’s agents in 2014's "24: Live Another Day"), taking him out of play.

If you’re going to watch this series, give Hawkins a chance. It’s not his fault that “24: Legacy” Coto and Katz have pretty much handed him Jack Bauer’s broken-down, sweaty and funky shoes and asked him to run a marathon in them. The actor does that compellingly considering the long shadow Sutherland still casts over the brand and in spite of its worn-out structure. He has the action hero’s brooding, this-means-business expression down cold, and can forcefully roar when pressured, just like Sutherland did.

The element of “24: Legacy” that feels especially tedious, though, is its return to the well of radical Islamic terrorism. I say this with the full awareness of ISIS being the world’s top threat, and to its credit, one of its subplots involves the Muslim assistant to a senator campaigning for president (Jimmy Smits’ John Donovan) coming under suspicion perhaps unjustly.

But there are other arms of extremism in the world to be battled and variations of conspiracy to ponder. Past seasons pitted Agent Bauer against a Mexican drug cartel, Chinese operatives and homegrown cabals. “Six” has a developing mission to find one of its members, Rip Taggart (Walton Goggins) who has been captured by Boko Haram; we see Rip and a group of girls and their teacher struggling to survive the brutality of their captors. “Homeland” also references Boko Haram, but in the context of a plot that implies the government may be framing a young man who is the child of a Nigerian immigrant.

These are plots inspired by a real, ongoing tragedy that hasn’t gotten nearly the amount of coverage or consideration as the loud frustrating debate over whether the Syrian refugees begging for asylum in the United States are terrorists.

When “24” was in its heyday, Agent Bauer’s missions normalized torture and played a role in shaping misconceptions about the Muslim community. In fairness, the drama’s lasting impact on our culture is very low the list of reasons the government is currently targeting Muslims. For that we can point to 9/11 and al Qaeda, the rise of ISIS, subsequent attacks around the world and our apparent impotence in defeating the multi-headed beast of extremism, and the right wing's perpetuation of xenophobia and racism.

However, what does it say that after all these years the “24: Legacy” could not find an inventive time-sensitive threat for Carter to face in the first three episodes? There are many answers to that question, and admittedly one is that viewers like me may simply be fatigued by witnessing yet another example of this madness insinuating itself into prime-time entertainment. Then again, perhaps I would not be as unmoved by it if the formula didn’t feel so tiresome.