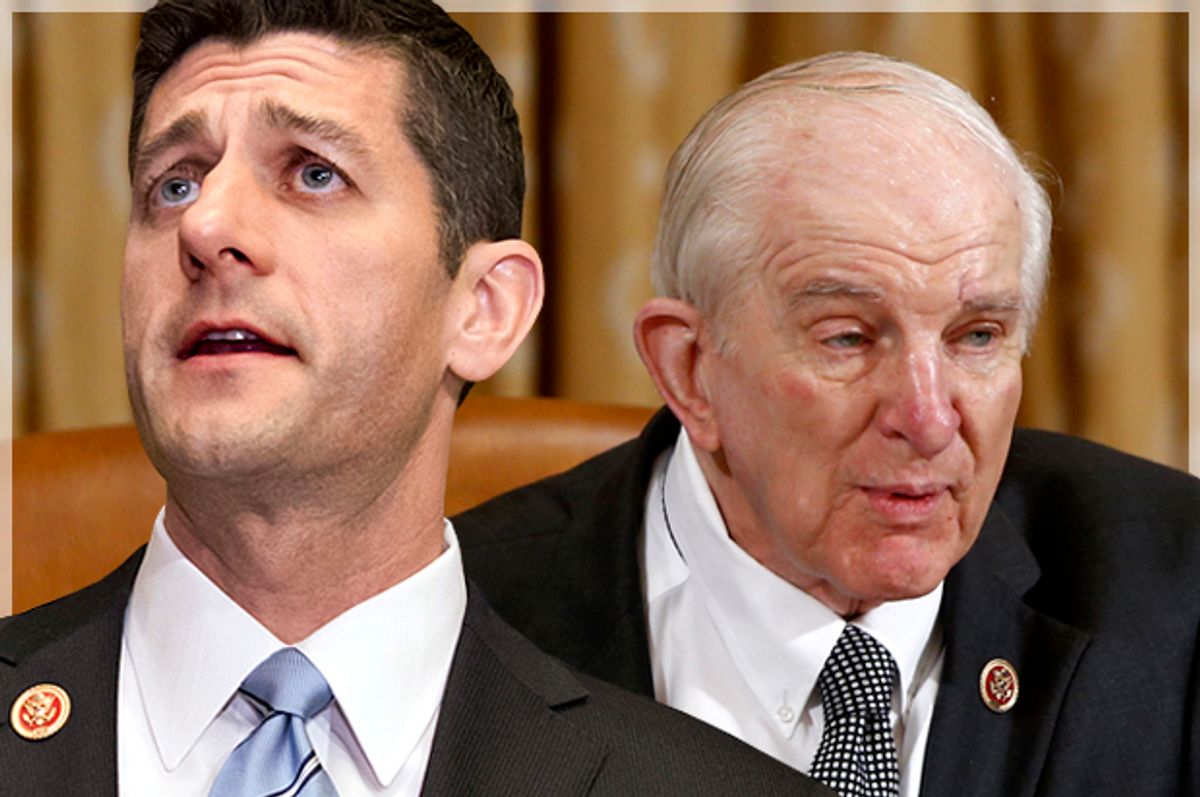 Not the symbolic Uncle Sam, but Sam Johnson. Although he's been a member of Congress more than a quarter of a century, it's unlikely you've ever heard of him. He's a lawmaker who holds a congressional seat, but just sits in it, achieving so little that he's unnoticeable.

But look out! Johnson has suddenly leapt into action. And we all need to take notice, because this Texas Republican has unveiled what he calls his "Plan to Permanently Save Social Security."

To get you to support the plan, Uncle Sam wants you to believe that this successful and very popular retirement program is "going bankrupt." He knows that's a lie, but he hopes it's a big enough lie to panic you into doing anything to save the program. Then to make his particular plan easy to swallow, he coats it with another lie, claiming that he's merely "modernizing," "updating" and "ensuring" the benefits and solvency of the Social Security program, which a big majority of Americans count on to avoid living out their golden years in stark poverty.

In fact, conniving old Uncle Sam's plan is to "save" Social Security by gutting it. The congressman's press release announcing his "reform act" doesn't mention that it's entirely a scam, based on making workers keep paying the same 12.4 percent tax on their wages, but receiving drastically less paid back to them when they retire. How much less? It would range from about 20 percent less to 69 percent less, adding up to a total cut of 11.6 trillion in promised benefits to America's workers.

It's bad enough that a so-called public servant would slap the middle class with such a raw deal, but worse that he tries to do it so dishonestly. Maybe he just doesn't care. After all, having been a Congress critter for 28 years, not only can Johnson draw a big Social Security check, but he can also receive more than $70,000 a year from his congressional pension. What a deal — for Uncle Sam, that is.

For nearly half a century now, America's middle-class working families have been pummeled by corporate greed meisters and their political henchmen. Haven't they been punished enough?

No, says House Speaker Paul Ryan. Along with Uncle Sam and other top Republican leaders of Congress, Ryan intends to slash the little bit of retirement money that middle-class and low-income workers depend on. And ultimately, Speaker Ryan is out to kill our Social Security program altogether, piously preaching that dependence on such public "entitlements" weakens our nation's morality.

Entitlements? Social Security isn't a welfare program. Regular working people pay a large percentage on every dime of their wages into the Social Security pension fund year after year. They earn their retirement!

Morality? Social Security embodies America's core moral value of fairness and our society's commitment to the common good. And it works. Before it was enacted, half of all American's spent their "golden years" in poverty. Social Security has saved the great majority of us from old-age penury. Where is the morality in taking this earned retirement and modicum of dignity from millions?

Besides, a sermon on the morality of entitlements should never come from a Congress critter's mouth. Speaker Ryan himself wallows in a mud pit of congressional entitlements that working stiffs couldn't imagine: A $223,500 annual paycheck, free limousine and chauffeur, a maximum-coverage health plan, a tax-paid PR agent, a lavish expense account, free travel and, of course, a platinum-level congressional retirement program funded by the very taxpayers whose Social Security he's out to kill.

Yet, Ryan wonders why Congress' public approval rating is plummeting toward single digits.