A January to remember: Migos gets it all, fans ask for more

The trap stars host a course on culture, provide a master class on blowing up 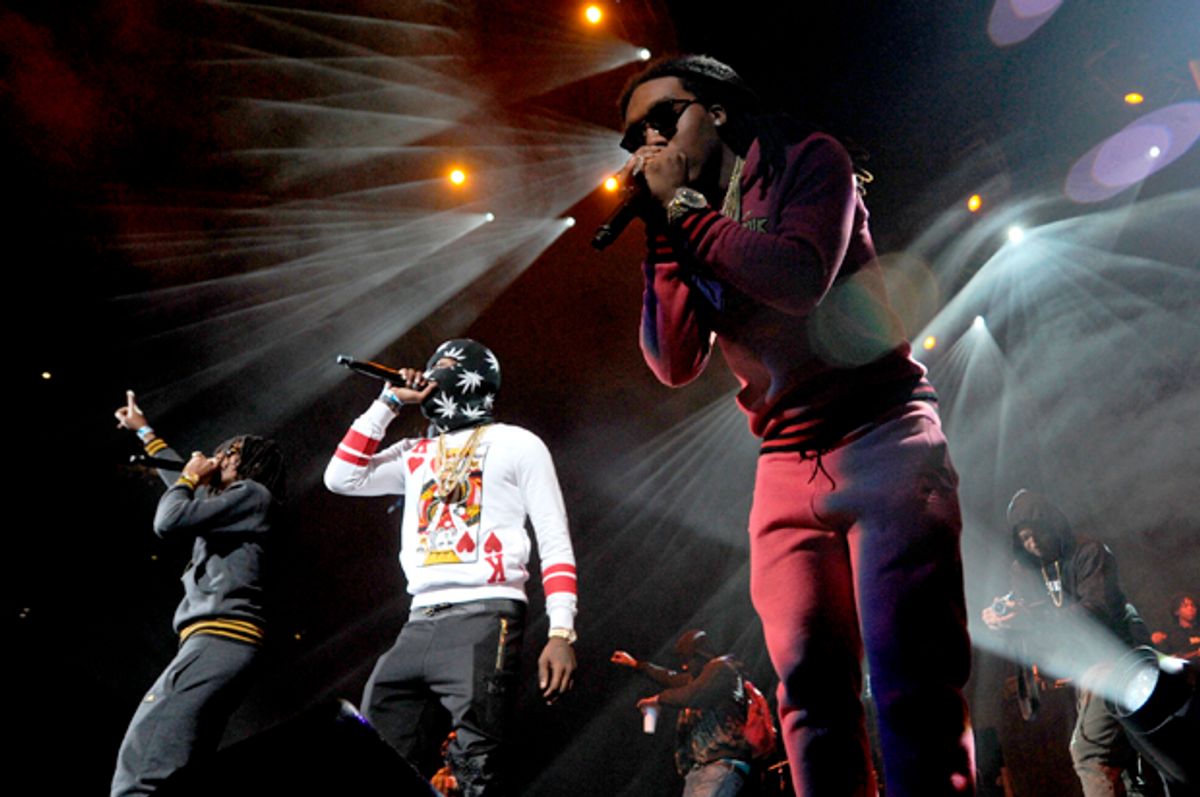 On Saturday afternoon, the rap group Migos was the subject of a pop-up Culture Class — an allusion to its sophomore album, “Culture,” which was released on Friday — at New York University. The rappers Quavo and Takeoff, who make up two-thirds of Migos (Offset was absent), were asked about fashion culture, pop culture and music culture.

Questions included the following: How does an up-and-coming artist with $100 to spend achieve the Migos look? (Can’t.) What three movies would you take if you were stranded on a desert island? (“Castaway,” “The Pursuit of Happiness” and a crazy shoot-'em-up flick.) And how is cash a fashion statement and is there a duffel bag nearby full of cash right now? (“There’s a pocket nearby.”)

It was Quavo, the oldest member of the group,  who gave the bulk of the answers. And it was he who made the pocket joke, and like Mary Poppins, he proceeded to produce a brick of cash that incomprehensibly had fit, and been unnoticed, in the pocket of his black designer joggers. Takeoff, wearing light ripped jeans, did the same. The audience, composed mostly of students and members of the press, laughed and hollered, astonished. So yes, the rappers were saying, cash is a fashion symbol, part of a bigger status symbol — and Migos is always repping.

While the members of Migos were rich and stuntin’ a month ago, Saturday marked the culmination of their coronation. January has been a turning point in Migos’ career, whereby its members have gone from rap stars to Rock Stars — artists who have been featured on the cover of music magazines like The Fader and XXL to performers who could very well grace the cover of GQ by year’s end. There’s currently a petition circulating for Migos to replace Lady Gaga performing at the Super Bowl half-time show. How Migos got to this point is itself a master class in how to leverage a fortuitously timed gift and turn momentum into transformation.

By now, the story of how Migos’ month began is probably familiar: On Jan. 8, when Donald Glover accepted the Golden Globe for best musical or comedy television series for his series “Atlanta,” he thanked Migos, “not for being in the show, but for making ‘Bad and Boujee.’” He called it “the best song ever." The next day, the single, which was released in October, hit No. 1 on the Billboard Singles chart.

The gift from Glover begot requests from late-night shows. And nine days later, Migos performed on “Jimmy Kimmel Live,” its most high profile and mainstream appearance to date. Then this past weekend, the group released “Culture,” played an album-release show at the Highline Ballroom in Manhattan and gave the course at NYU.

That Migos, an Atlanta trap group, spent the weekend of its album release in New York is a testament both to the continuing star-making importance of the city and to Migos’ savviness. Though the nucleus of hip-hop aesthetics and innovation has moved south (to Atlanta) and west (to Los Angeles), the bulk of the entertainment media remains in New York. At each stop throughout Migos’ weekend, a flock of journalists followed. The narrative was obvious: Migos has arrived.

It’s a narrative that’s hard to dispute. “Culture” immediately became the No. 1 album in the world. And, in a word, Saturday’s show was lit: Between the eight hundred romping fans — a good deal of whom, it should be noted, were white teens — and the thick clouds of sticky smoke, no crevice of the Highline Ballroom was left unoccupied. Fans stood on couches, sat on shoulders, pushed and pivoted just to get a glimpse of Migos swagger around the stage.

And though Migos performed only for an hour and didn’t incorporate any flashy light or stage theatrics, it put on quite the show. The most noteworthy moment was when the act performed the song “Get Right Witcha” and brought out producer Zaytoven, who played the keytar. But even that bit of pomp was unnecessary. Migos is compelling purely as a Cerberus. The way Quavo, Takeoff and Offset augment one another with trap hollers (“skkrt,” “grrah”) and build layered texture is enjoyable on recorded tracks, but immaculate live. The response to a call is automatic and the synchronicity of their voices is as natural as the three keys on a trumpet.

Migos’ popularity stems in great part from the contagion of such layers. Scream the word “Raindrop” in a crowd of millennials and their response will be not be looking up to the sky but screaming “Droptop!” These words ostensibly have nothing to do with each other, but given context through “Bad and Boujie,” they feel like a divined pair — as do hands in the air and heads nodding when the song comes on.

“Bad and Boujee” is not Migos’ first viral sensation. The musicians garnered a Drake remix with their 2013 single “Versace” and coined “dabbing” with their 2015 single “Look at My Dab.” They claim to be able to make a hook out of anything — and, indeed, on Saturday afternoon they improvised a hook based on the prompt of “Febreze”: ("A can of Febreze/ Cookies make you sneeze/ told that bitch to freeze”). Each member of the group is 25 or younger, so there’s reason to think that Migos will continue churning out hits for many years to come.

But we live in strange times. Never has the political been more pervasive. And while Migos’ music plays an age-old function (escapism about sex, drugs and luxury), and one that has certainly been especially profitable in past conservative presidencies (Ronald Reagan’s and George W. Bush’s in particular), it remains to be seen whether being apolitical and materialistic in this time will be sustainable.

During an audience Q&A at the NYU course, one member of the crowd got up and said, "You guys are really influential in terms of pop culture right now. Do you plan on utilizing that platform to address a lot of the political and racial injustices that's going on today?"

Quavo answered, "I think we need to get our foundation a little bit stronger to start talking about that."

That was insufficient for the man who asked the question. "You guys got it right now, man,” he said. “And all this shit is happening right now. You guys doing it for the culture; yo, this is our culture, yo. You gotta speak on that. bro."

The audience applauded and Quavo said, "At least I know I got you guys behind me now, so let's do it."

It was what the audience wanted to hear but it was a response given half-hearted. And later, when an audience member asked about the violence in Atlanta’s zones, Quavo dodged. “I don’t like talking about stuff like that because I don’t want my words to get twisted up.” Audiences will have to resign themselves to the fact that some artists are better left to word twisting and mind bending than attempts at profundity and punditry. Migos is one of these groups of artists. Accept these musicians for their boujeeness and brain-staining hooks — or don’t.