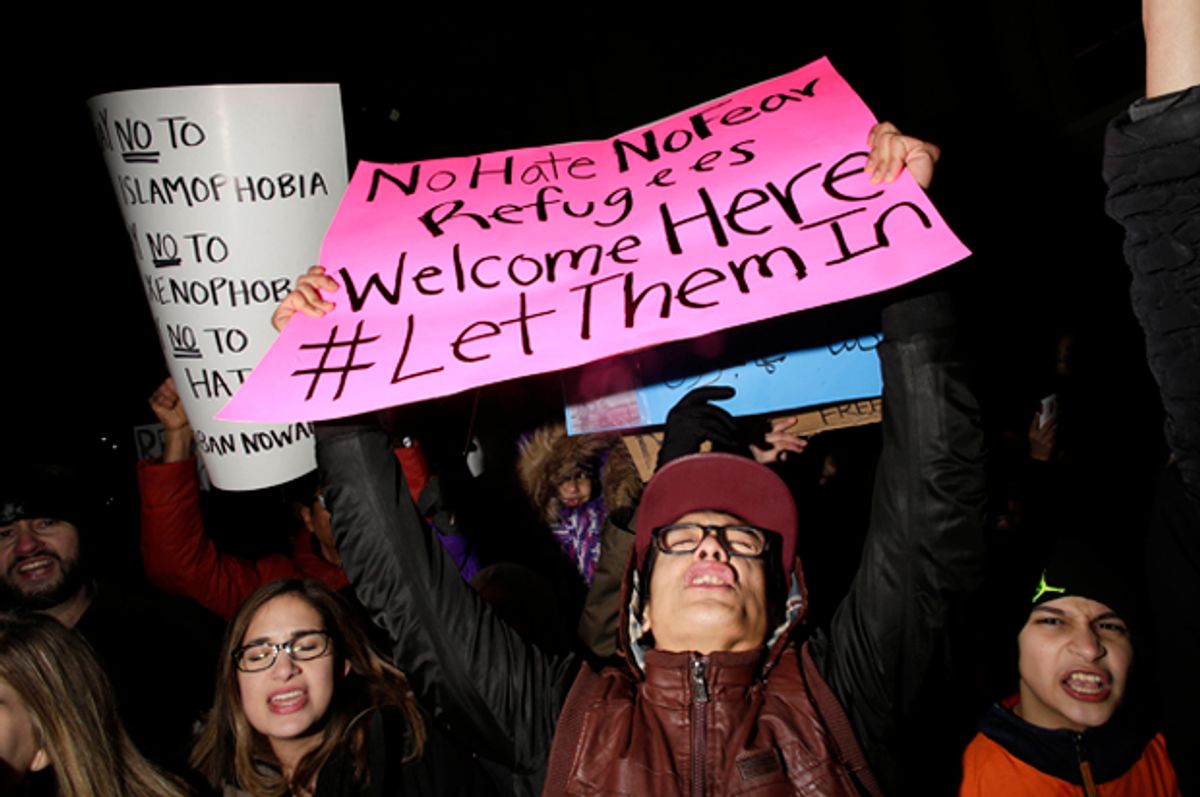 Despite incessant complaints about presidential overreach during Barack Obama’s tenure in the White House, many Republicans are now embracing Donald Trump’s flurry of executive orders. As the entire world has now noticed, one of these orders has implemented an immigration and travel ban that targets the Muslim-majority countries of Iraq, Iran, Libya, Somalia, Yemen, Sudan and Syria.

It also has suspended the U.S. Refugee Admissions Program, which is responsible for overseeing the transfer of refugees to the United States. Although Sens. John McCain and Lindsey Graham have criticized the "Muslim ban," many other leading GOP figures are staying quiet.

The result has been yet another round of massive protests across the country and a vociferous international response. On one hand, there is an obvious moral issue here: Hundreds of thousands of innocent people are suffering due to war and conflict overseas, yet America's official response now has been to slam the door on them. This is not only immoral; it also goes against the Christian tradition so many Republicans claim to uphold: The Bible repeatedly states that people should welcome with open arms outsiders, outcasts and travelers — i.e., foreigners.

It seems that Mike Pence once recognized this when he tweeted in 2015, “Calls to ban Muslims from entering the U.S. are offensive and unconstitutional.” Our new vice president appears to have flip-flopped on this issue in recent weeks.

This moral issue is further underlined by the fact that, as national security analyst Peter Bergen put it, the “overwhelming” number of terrorist incidents since 9/11 have involved Americans, not foreigners. Furthermore, of the approximately 15,000 Syrian refugees living in the U.S., exactly none of them have been implicated in terrorist plots. In fact, most of these refugees — 67 percent, as of 2015 — are children under the age of 12 or women. These are individuals fleeing what some commentators have called World War III, in which more than 400,000 people have been killed and entire cities devastated. An epicenter of the humanitarian crisis is the Syrian city of Aleppo, which has produced an array of videos and pictures of children suffering unfathomable injury amid a near-apocalyptic collapse of society.

Even more generally, statistics show that of the 784,000 refugees now in the U.S., “a total of three have been charged with plotting terrorist attacks,” according to the Migration Policy Institute. There’s good reason for this: Sneaking into the U.S. on a refugee visa is incredibly difficult. There are far “easier and faster ways to get [into America] than by going through the complex refugee resettlement process,” according to the Economist, because refugees are "subject to the highest level of security checks of any traveler category to the United States,” as PolitiFact has pointed out.

As PolitiFact has outlined, refugees need a referral from the United Nations High Commissioner for Refugees prior to screening by U.S. authorities. Only about 1 percent of these individuals end up getting through this. The U.S. then has its own security measures, which involve background checks, fingerprint analysis and an interview with the Department of Homeland Security. If prospective refugees get through all this, “they then undergo a medical screening, a match with sponsor agencies, ‘cultural orientation’ classes and one final security clearance. . . . Syrian refugees in particular must clear one additional hurdle. Their documents are placed under extra scrutiny and cross-referenced with classified and unclassified information.” The probability of dodging these obstacles is extremely low.

At least some other world leaders are taking a stand for justice and compassion. For example, both British Prime Minister Theresa May and German Chancellor Angela Merkel oppose Trump’s actions. During a recent phone conversation, Merkel apparently had to explain the Geneva Conventions to Trump, noting that these agreements “require the international community to take in war refugees on humanitarian grounds.” Canadian Prime Minister Justin Trudeau has announced that his country would be willing to accept individuals ostracized by the U.S. In his words, via Twitter: “To those fleeing persecution, terror & war, Canadians will welcome you, regardless of your faith. Diversity is our strength #WelcomeToCanada.”

Beyond the heartbreaking moral catastrophe of banning desperate people from the U.S., Trump’s executive order could do significant damage to our ongoing struggle with global terrorism. As Frances Flannery, a terrorism expert who runs the Center for the Interdisciplinary Study of Terrorism and Peace, told me by email, there are multiple reasons to expect blowback from this ban.

Flannery noted that only “0.02 percent of Muslims in the world are terrorists, based on State Department statistics.” Consequently, any "black-and-white, ‘us vs. them’ rhetoric that groups 134 million people [meaning those affected by the ban] together with the radicalized few, or claims that the problem is Islam, is both seriously misinformed and dangerous.” In fact, Trump has publicly suggested that Christian refugees will get preferential treatment when trying to enter the U.S. This reinforces a dangerous perception — first made explicit by former president George W. Bush when he described the “war on terrorism” as a “crusade” back in 2001 — that the Christian and Islamic worlds are at war in a great “clash of civilizations.”

As journalist Graeme Wood put this point during a public debate with Sam Harris:

I certainly don’t think that “mainstream” Muslims are people we have to worry might choose the wrong side in this conflict. But I think that there is a particular type — and it’s quite segmented by sex and by age, as well — of people who are spoiling for a fight. They really are waiting for confirmation of this “clash of civilizations” narrative. They’re a small percentage of the Muslim population [but] even a small percentage is a lot of people.

The "clash of civilizations" narrative was, indeed, a central feature of Osama bin Laden’s propaganda. According to bin Laden, the Christian West was trying to take over the Muslim lands of the Middle East — a claim that was confirmed in the eyes of many Muslims by the 2003 pre-emptive invasion of Iraq by the U.S. The idea of a civilizational clash is also deeply rooted in the apocalyptic ideology of the Islamic State, which anticipates a “grand battle” — essentially Armageddon — that will soon occur between the Western (or “Roman”) forces and their own army in the small Syrian town of Dabiq, which just so happens to be close to Aleppo. The al-Qaida affiliate in Somalia, al-Shabab, has already used Trump’s words about barring Muslims (from his campaign) in its recruitment propaganda. There is little doubt that other groups will exploit this debacle, along with Trump’s reckless rhetoric about torture.

U.S. forces have played whack-a-mole with terrorists for 16 years, yet the threat from Islamic extremists has only grown worse. As one expert has put it, terrorism is more of a “demand-driven” than “supply-limited” phenomenon. A discriminatory, hostile “Muslim ban” will almost certainly inflate “demand” for Muslim anger in general, and terrorist outrage in particular.

Here's another important observation on this shameful episode in American history. The executive order signed by Trump states: “Deteriorating conditions in certain countries due to war, strife, disaster, and civil unrest increase the likelihood that terrorists will use any means possible to enter the United States.” The great irony of this statement, which appears to be lost on our know-nothing president, is that “war, strife, disaster, and civil unrest” are all consequences of climate change.

As I’ve written many times before, climate change is a “threat multiplier” that will lower the conflict threshold between state and nonstate actors, thereby making acts of violence more probable. High-level government officials like former CIA chief John Brennan and former defense secretary  Chuck Hagel have both acknowledged this link. Even more compelling is a 2015 scientific study that essentially links anthropogenic global warming with the rise of the Islamic State.

There are two points to make here: First, if Trump were knowledgeable and wise, he would be signing executive orders to curb climate change rather than to bar Muslim refugees from entering the country. This would save the world from immense strife, conflict and civil unrest in the coming years and centuries. Second, if Trump fails to mitigate climate change — which appears highly likely, and is one of the reasons the Doomsday Clock ticked forward this year — then we should expect the effects of climate change to give Trump and his cronies a license to enact even more harmful policies in the future.

Trump’s "Muslim ban" is immoral, ineffective and likely to worsen the problem of global terrorism. As former vice president Dick Cheney, not usually a go-to source of empathetic wisdom, has put it:

I think this whole notion that somehow we can just say no more Muslims, just ban a whole religion, goes against everything we stand for and believe in. . . . I mean, religious freedom has been a very important part of our history and where we came from. A lot of people, my ancestors got here, because they were Puritans.

I may never have said this before: At least when it comes to President Trump's recent actions, I stand with Cheney.