Beneath Trump’s public bravado is a deeply insecure, troubled man who is unfit to be president 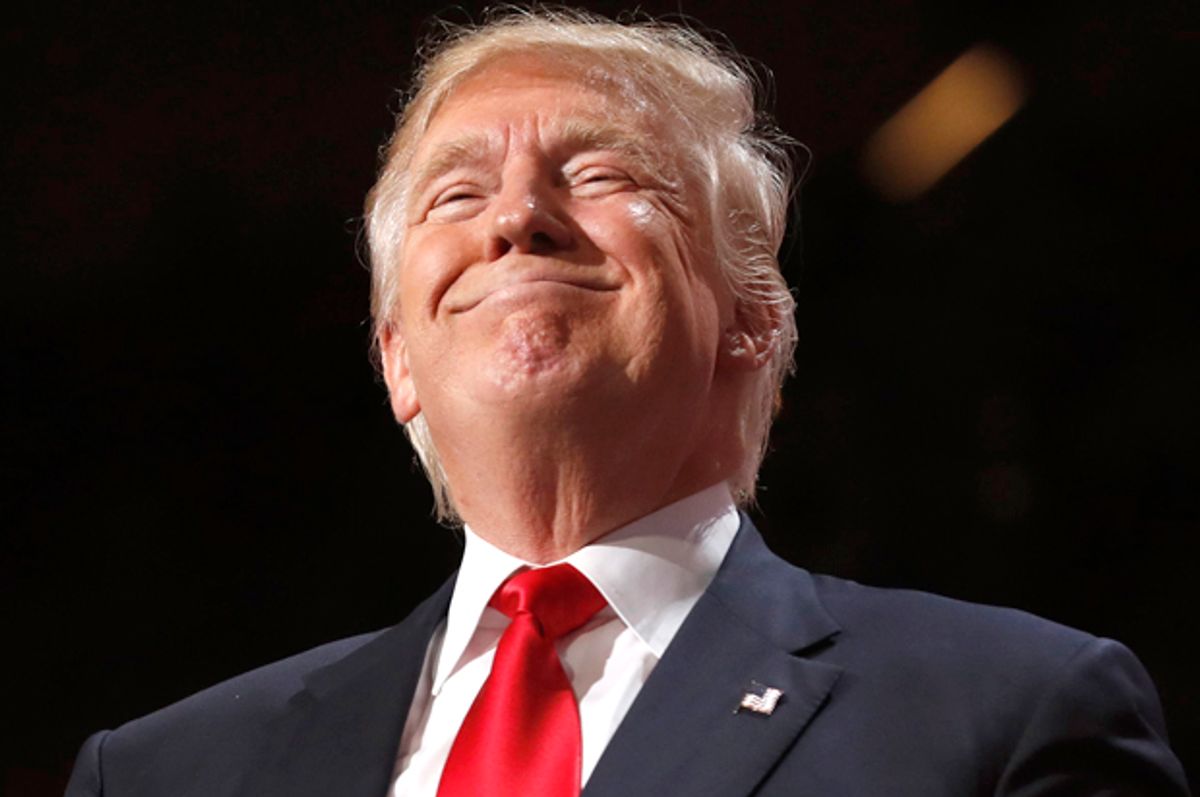 The only two words Donald Trump has uttered more frequently than “you’re fired” are “I’m smart.”

He did it again last week during his visit to CIA headquarters. Trump’s handlers staged the event so he could demonstrate his full support for the agency (despite spending the past year bashing the nation’s intelligence community), and to divert media attention away from the tens of thousands of Americans who had come to Washington, D.C., that day to protest Trump’s presidency. But Trump’s scripted remarks turned into a rambling rant that included attacks on the media and his insistence that as many as 1.5 million people attended his inauguration (photos revealed no more than 250,000).

In the middle of his tirade, Trump felt the need to tell the nation’s top spies that he is a bright guy.

Last month Trump repeated those same words while explaining why he’ll be the first president since Harry Truman to avoid getting daily updates from intelligence professionals about national security threats.

Trump has repeated that claim many times. Each time, it isn’t clear if he’s trying to convince his interviewer or himself.

In 2004, in an interview with CNN, Trump said, “I went to the Wharton School of Finance. I got very good marks. I was a good student. It’s the best business school in the world, as far as I’m concerned.”

In 2011, in an interview with ABC, Trump said: “Let me tell you, I’m a really smart guy. I was a really good student at the best school in the country,” referring once again to Wharton, the University of Pennsylvania’s business school, where he earned a bachelor’s degree in 1968.

“I went to the Wharton School of Finance,” he said during a speech in Phoenix in July 2015. “I’m, like, a really smart person.”

During a CNN-sponsored Republican town hall in Columbia, South Carolina last February, Trump reminded the audience that he had gone to Wharton and then repeated his boast: “Look, I went to the best school, I was a good student and all of this stuff. I mean, I’m a smart person.”

Anyone who feels compelled to boast about how smart he is clearly suffers from a profound insecurity about his intelligence and accomplishments. In Trump’s case, he has good reason to have doubts.

Trump has the kind of street smarts (what he calls “gut instinct”) characteristic of con artists and hucksters, but his limited vocabulary, short attention span, ignorance of policy specifics, indifference to scientific evidence and admitted aversion to reading raise questions about his intellectual abilities, and his capacity to absorb and analyze information and ideas.

Many observers have noted that Trump has a difficult time expressing himself and speaking in complete sentences. A linguistic analysis by Politico found that Trump speaks at a fourth-grade level. A study by researchers at Carnegie-Mellon University compared last year’s Republican and Democratic presidential candidates in terms of their vocabulary and grammar. Trump scored at a fifth-grade level, the lowest of all the candidates.

Some might suspect this is not an intellectual shortcoming but instead Trump’s calculated way of communicating with a wide audience. But Tony Schwartz, who spent a great deal of time with the real estate developer while ghostwriting his book "The Art of the Deal," noted that Trump has a very limited vocabulary.

It would hardly be surprising if these observations infuriated the vain and insecure Trump. Trump’s persistent insults directed toward anyone who disagrees with him also suggest his deep insecurity. Before, during and since his presidential campaign, Trump has constantly denigrated his opponents and detractors, among them actresses Rosie O’Donnell, Cher and Meryl Streep, civil rights icon Rep. John Lewis, businessman Mark Cuban, GOP political operatives Karl Rove and Ana Navarro, NBC’s Chuck Todd, Jeb Bush, Weekly Standard editor Bill Kristol and conservative columnist George Will.

For example, on May 8, 2013, Trump tweeted: “Sorry losers and haters, but my I.Q. is one of the highest -and you all know it! Please don’t feel so stupid or insecure, it’s not your fault.”

On Sept. 26, 2014, nine months before he announced his candidacy for the White House, Trump tweeted: “I wonder if I run for PRESIDENT, will the haters and losers vote for me knowing that I will MAKE AMERICA GREAT AGAIN? I say they will!”

Last Sept. 17 — after CNN anchors criticized Trump for promising a “big announcement” to get the media to come to an event, only to use the moment to tout his new hotel and then invite several military figures onstage to praise him — Trump had another Twitter tantrum: “CNN just doesn’t get it, and that’s why their ratings are so low - and getting worse. Boring anti-Trump panelists, mostly losers.”

In contrast to his attacks on “losers,” Trump frequently retweets comments from others congratulating him for how “smart” he is.

Only someone who secretly doubts his own intelligence would feel compelled to make these kinds of public statements.

Trump surely knows he didn’t get into Wharton on his own merits. He transferred into Wharton’s undergraduate program after spending two years at Fordham University in New York. According to Gwenda Blair’s 2001 biography, "The Trumps," Trump’s grades at Fordham were not good enough to qualify him for a transfer to Wharton. Blair wrote that Trump got into Wharton as a special favor from a “friendly” admissions officer who knew Trump’s older brother, Freddy. The college’s admissions staff surely knew that Trump’s father was a wealthy real estate developer and a potential donor.

Moreover, Trump has for years exaggerated his academic accomplishments at Wharton. On at least two occasions in the 1970s, The New York Times reported that Trump “graduated first in his class” at Wharton in 1968. That’s not true. The dean’s list for his graduation year, published in the Daily Pennsylvanian, the campus newspaper, doesn’t include Trump’s name. He has refused to release his grade transcripts from his college days.

It is likely that Trump was the original source for that falsehood, but it isn’t entirely clear, since neither Times article attributes it directly to him. But the fabrication that Trump was first in his class has been repeated in many other articles and books about Trump, so he clearly knew it was out there in the public domain and has never bothered to correct it.

“He was not in any kind of leadership. I certainly doubt he was the smartest guy in the class,” Steve Perelman, a classmate of Trump’s at Wharton, told the Daily Pennsylvanian in 2015.

Trump’s insecurity about his accomplishments is also revealed in his efforts to portray himself as a self-made entrepreneur.

“It has not been easy for me,” Trump said at a town hall meeting on Oct. 26, 2015, acknowledging, “My father gave me a small loan of a million dollars.”

At a news conference last year, Trump repeated the same story: “I got a very, very small loan from my father many years ago. I built that into a massive empire and I paid my father back that loan.”

An investigation by The Washington Post in March demolished Trump’s claim that he made it on his own. Not only did Trump’s multi-millionaire father Fred provide Donald with a huge inheritance and set up big-bucks trust accounts to provide his son with a steady income, but Fred was also a silent partner in Trump’s first real estate projects. According to the Post:

“Trump’s father — whose name had been besmirched in New York real estate circles after investigations into windfall profits and other abuses in his real estate projects — was an essential silent partner in Trump’s initiative. In effect, the son was the front man, relying on his father’s connections and wealth, while his father stood silently in the background to avoid drawing attention to himself.”

Fred Trump’s real estate fortune was hardly due to his faith in the free market, but instead stemmed from his reliance on government subsidies. He made his money building middle-class apartments financed by the Federal Housing Administration.

In 1954, when Donald was eight years old, his father was subpoenaed to testify before the Senate Banking Committee on allegations that he had ripped off the government to reap windfall profits through his FHA-insured housing developments. At the hearings, the elder Trump was called on the carpet for profiteering off public contracts, including overestimating the construction costs of his projects in order to get larger mortgages from FHA. Under oath, he reluctantly admitted that he had wildly overstated the development costs.

Donald has followed in his father’s corrupt footsteps. Trump’s career is littered with bogus businesses, like Trump University; repeated ripoffs of suppliers, contractors and employees whom he failed to pay for services rendered; and the misuse of the Trump Foundation to feather his own nest while trying to look like a philanthropist. Six of Trump’s businesses have gone bankrupt. Despite this, on April 18, 2015, Trump tweeted this falsehood: ”For all of the haters and losers out there sorry, I never went Bankrupt.”

Trump has also lied about the size of his wealth, as various business publications have pointed out. Many observers suggest one reason Trump has refused to release his tax returns is that they will show he has repeatedly and wildly exaggerated his wealth and thus his success.

Many observers have noted Trump’s sociopathic, thin-skinned, demagogic, authoritarian, impulsive and vindictive personality. Although Trump has the self-awareness of an adolescent, it is obvious to many others that his compulsion to constantly boast “I’m smart” and to deride others as “losers” is rooted in his profound sense of insecurity.

Presidents don’t have to be geniuses. But a successful president must recognize his own limitations and be willing to rely on others’ expertise. He has to take constant criticism — from the media, political opponents and his own advisers — without taking it too personally. Surrounding oneself with yes-men and -women who are afraid to tell the president he’s wrong is a recipe for disaster. Most important, an effective president needs good judgement, to be able to hear different viewpoints, weigh evidence, think several steps in advance rather than act impulsively and be calm under intense pressure. Trump fails each of these tests.

Beneath Trump’s public bravado is a deeply insecure, troubled man who is unfit to be president. This makes him a danger to the country and the world.