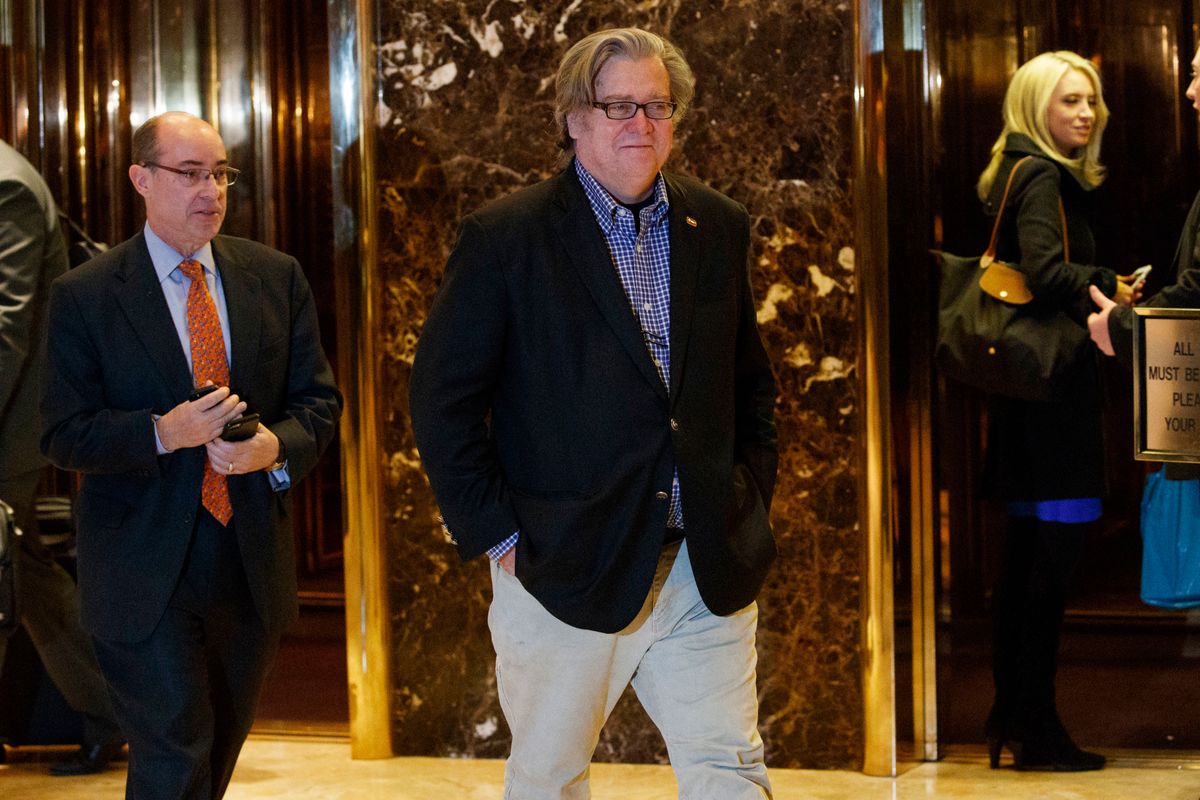 Steve Bannon, President Donald Trump's right-hand man, made what was essentially a call for a Christian holy war in a speech in a international conference only a few years ago.

Bannon, chief strategist and senior counselor to Trump, is notorious for his extreme right-wing views. He previously served as the CEO for the far-right president's campaign, and now sits on the National Security Council.

In remarks to a 2014 conference at the Vatican, Bannon warned his Christian audience, "We're at the very beginning stages of a very brutal and bloody conflict."

"We are in an outright war against jihadists, Islam, Islamic fascism," Bannon continued. He likewise condemned "the immense secularization of the West" and the increasing secularism among millennials.

Bannon stressed that "the people in this room, and the people in the Church" must "bind together and really form what I feel is an aspect of the Church militant, to really be able to not just stand with our beliefs but to fight for our beliefs against this new barbarity that's starting that will literally eradicate everything that we've been bequeathed over the last 2,000 and 2,500 years."

In his speech, Bannon articulated a view of the world as a constant conflict between the capitalist "Judeo-Christian West," which is a benevolent force of "enlightenment," and the malevolent forces of socialism, atheism, and Islam.

Trump's chief strategist, who will now play a crucial role in crafting U.S. foreign policy and sit in on meetings of the National Security Council Principals Committee, has been described even by hard-line conservatives as an extremist.

Ultra-right-wing pundit Glenn Beck compared Bannon to the Nazi propagandist Joseph Goebbels, a close ally of Adolf Hitler, and said the Trump campaign was “grooming Brownshirts,” in reference to Nazi paramilitaries. According to Beck, Bannon is “quite possibly the most dangerous guy in all of American politics.”

Bannon made these holy war remarks in a speech — which has previously been reported on by BuzzFeed — at the 2014 International Conference on Human Dignity, the third annual meeting organized by the Rome-based Christian organization Dignitatis Humanae Institute.

A glowing endorsement from Bannon is conspicuously featured at the top of the Dignitatis Humanae Institute's website, in which President Trump's right-hand man calls the group's founder Benjamin Harnwell "the smartest guy in Rome" and "a very tough guy."

The religious organization uploaded footage of Bannon's speech at its 2014 conference to YouTube. The video had only a few thousand views at the time of the publication of this article.

When he made his remarks, Bannon served as chairman of the far-right media company Breitbart, which is infamous for publishing racist and sexist material. Bannon has identified Breitbart as "the platform for the alt-right," a popular euphemism for the growing white supremacist, neo-fascist movement in the U.S. and Europe.

In a guide Breitbart published on the alt-right, it noted that the movement was founded by neo-fascist leader Richard Spencer, who declared "Hail Trump! Hail our people! Hail victory!" at a white supremacist conference in November, referencing the Nazi slogan "Sieg heil."

Bannon kicked off his 2014 speech warning that "the world, and particularly the Judeo-Christian West, is in a crisis."

"It is really the organizing principle of how we built Breitbart News to really be a platform to bring news and information to people throughout the world — principally in the West, but we're expanding internationally — to let people understand the depths of this crisis," he explained.

Bannon noted that, exactly 100 years before his speech, Archduke Franz Ferdinand was assassinated in Sarajevo, in a shot heard round the world that prefaced World War I. This war heralded in the bloodiest century of human history.

The 20th century, Bannon argued, constituted a kind of second Dark Age. He described its conflict as "the Judeo-Christian West versus atheism."

"But the thing that got us out of that... was just not the heroism of our people," Bannon continued. "The underlying principle was an enlightened form of capitalism," he explained. "That capitalism really generated tremendous wealth."

Bannon stressed that the absolute basis of this civilization is capitalism. "I'm a very practical, pragmatic capitalist. I was trained at Goldman Sachs; I went to Harvard Business School. I'm as hard-nosed a capitalist as you can get," he explained.

Yet Bannon criticized the libertarianism of figures like Ayn Rand, however, for "taking away from the underlying spiritual, moral foundations of Christianity and really Judeo-Christian belief." He added, "That form of capitalism is quite different, when you really look at it, to what I call the enlightened capitalism of the Judeo-Christian West."

In the early years of the 21st century, nevertheless, Bannon argued, "I believe that we've come horribly off track." He went on, claiming the time marked "the very beginning stages of a very brutal and bloody conflict."

Bannon spoke of the increasing secularism among young people in the West as a dangerous problem. "The overwhelming drive of popular culture is to absolutely secularize this rising generation," he lamented.

The Breitbart head also alarmed his Christian audience about the wave of extremist Islamism. "We're now I believe at the beginning stages of a global war against Islamic fascism," he said. "And this war is I think metastasizing far quicker than governments can handle it."

"We are at the very beginning stages of a global conflict," he continued. "If we do not bind together as partners, with others in other countries," Bannon added, then "this conflict is only going to metastasize."