Rise of an urban resistance: A weekend of protest proves that America's cities will not be silent

Trump's been attacking America's cities — and those of us who live in them — for months. Now we're fighting back 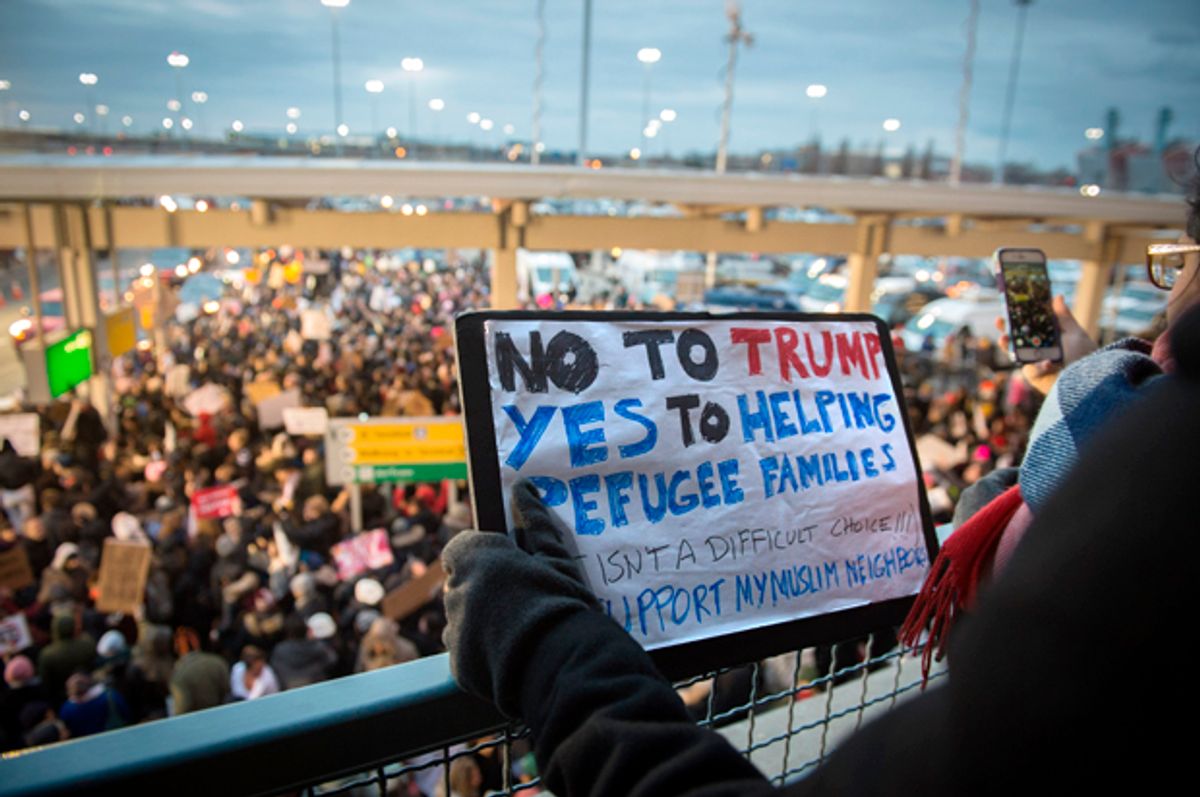 At 8:30 on Saturday night, my friends and I called it a night. We'd been out all day, first at JFK airport and then at the federal courthouse on Cadman Plaza in downtown Brooklyn. It had been a whole day of protest against President Donald Trump's executive order barring immigrants or visitors from seven Muslim-majority nations from entering the country.

At last the need to eat something was starting to overwhelm the need to stand there, waiting with a crowd of thousands, for word of the result of the legal arguments going on inside that court building over what was quickly being called the "Muslim ban."

We headed toward a nearby restaurant, but every few feet along the way someone stopped us to ask where the protest was. Some were in clumps and some were proceeding solo, but all were clearly people who had just dropped whatever they were doing in New York on Saturday night to run toward the courthouse. They were there to register their support for immigrants and hostility toward the clear signs of authoritarianism, perhaps even outright fascism, that Trump was making in his first week in the Oval Office.

Before we even got to the restaurant, our phones were blowing up. The judge had issued the stay. It was limited, but it was something. Now the real fight begins.

The horror of the Trump presidency is only just warming up, but so, it appears, is the resistance. And the war for the soul of this country is clearly going to be waged in the cities.

Trump is a lifelong New Yorker. Yet trashing cities and the people who live in them has become the centerpiece of his sales pitch to America. To hear him speak, American cities are crime-ridden wastelands where people don't dare leave their homes for fear of being murdered by terrorists or cartoonishly evil spree-killing immigrants.

"Our convention occurs at a moment of crisis for our nation," Trump insisted during his speech last summer at the Republican National Convention in Cleveland. "The attacks on our police and the terrorism in our cities threaten our very way of life."

Since his election, Trump has focused his ire on the cities of America, threatening to send federal troops into Chicago and threatening to yank federal funding from urban governments, using the right-wing hysteria over "sanctuary cities" as cover.

This bend toward overt hatred of America's cities builds on decades of conservative propaganda that casts heavily white rural and suburban communities as the "real America," while accusing those who reside in more liberal and racially diverse cities of being "elite" and living in a "bubble."

Of course, the uprising in the cities — with pro-immigrant marches and rallies, mostly at airports, in San Francisco, Washington, Dallas, Boston, Denver, Minneapolis and elsewhere — neatly showed how much this right-wing narrative is an inversion of reality.

American cities are not bubbles closed off from reality. They are the American reality of the 21st century. Cities have their problems, of course. But let's face it, cities are far more diverse and dynamic, on average, than small towns and suburbs. Indeed, it's the homogeneity — you could almost call it a "bubble" — that is what so often attracts conservatives to suburban or exurban America. It's called "white flight" for a reason.

"Get up! Get down! New York is an immigrant town!" the protesters at the federal courthouse in Brooklyn chanted.

The crowds that turned out at the protests refused to cave in to the narrative that paints the cities as dangerous or un-American. On the contrary, the protesters offered their own narrative of patriotism, one that defines America as great because of its diversity, its openness and its commitment to freedom. The Statue of Liberty, famously inscribed with Emma Lazarus' famous lines about the "huddled masses yearning to breathe free," was a popular icon for signs and costumes.

The protesters also rejected Trump's fearmongering about cities as cold, uninviting and criminal places. At the JFK rally, protesters kept buying coffee and doughnuts at the Dunkin' Donuts inside Terminal 4 and distributing the goodies to the crowd. A spirit of comity and even cheerfulness defined the crowd, despite the unquestioned gravity of the situation.

The "people's mic" strategy developed at Occupy Wall Street — whereby important information was conveyed by the crowd around the announcer that repeated the shouted words so the larger group could hear — was yet another demonstration of the cooperative spirit that defined the rally, at JFK and reportedly at other protests across the nation.

Even after we left the Cadman Plaza protest to eat and drink, the larger community of New York just kept showing support. People applauded others they saw leaving the protest, sometimes offering food and drink to total strangers.

On Sunday the protests that grew up in city after city appear to have been even bigger, an echo of the huge crowds that turned out the previous weekend for the women's marches. We are witnessing an emerging sense of solidarity and shared identity throughout urban America. Big cities and medium-sized cities, deep-blue cities in blue states and those that are liberal islands in otherwise conservative states — we are all linked now through having the common enemy of this fluke president, who demonizes the very diversity and cosmopolitanism that are this nation's greatest strength.

White House strategist Steve Bannon "wanted turmoil and condemnation," wrote Kevin Drum of Mother Jones, arguing that the surge of protests played into Trump's narratives of debauched, criminal, scary cities. His fears seem to be confirmed by Breitbart's spin on the protests.

this has been the front page of breitbart since early last night. pic.twitter.com/B8cKA4THY9

But just because Bannon and other right-wing trolls are exploiting this narrative doesn't mean that the protests aren't effective resistance. On the contrary, this sense of shared community and purpose that is rising up in the cities and being channeled through large-scale protests, presents a very real threat to Trump. People are sick of being lied about, and they are in revolt.

One thing you can say about those of us who live in cities is that we have the numbers. That's kind of the point of cities, come to think of it. Now those numbers are a force to be reckoned with.