Trump's Muslim ban is no surprise: Our new president's agenda is fueled by white nationalism

Scholars agree that Trump's inaugural address, and the Muslim ban, are infused with white nationalist ideology 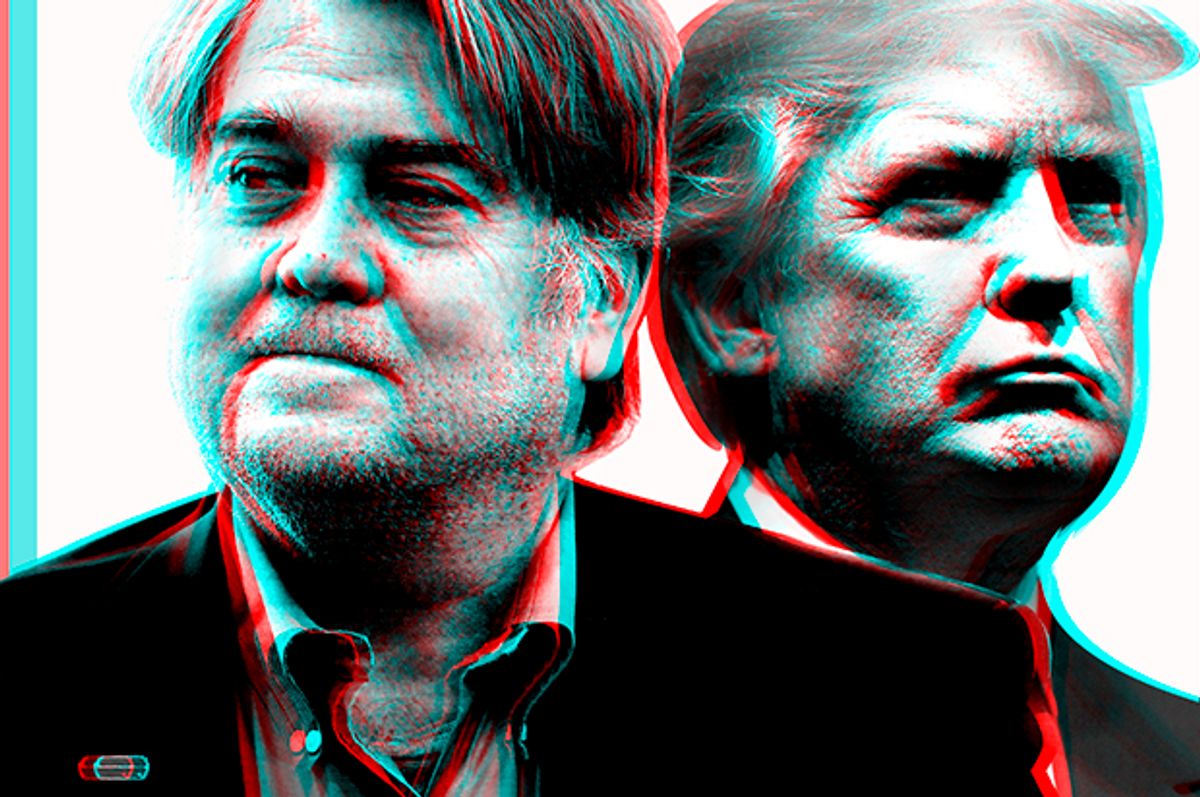 As president-elect, Donald Trump posed for a photo at his Mar-a-Lago resort, with Sharpie marker in hand and blank pieces of paper in front of him. The Great Leader proclaimed that he was busy writing his inaugural speech. Like all things touched by the Great Leader, it would be both grand and perfect.

Of course, this was a lie. In reality, Trump's inaugural address was written by his senior advisers, Stephen Bannon and Stephen Miller.

As it did while obsessively pursuing the "white working-class economic anxiety" narrative in the aftermath of the 2016 presidential election, the American news media has been largely ignoring the white nationalist themes that were woven throughout Trump's inaugural address.

White nationalism (and its ideological companion "white supremacy") is an inherently racist, violent and regressive ideology that's prefaced on a belief in the racial and cultural superiority of "white" or "European-American" civilization. White nationalism also crafts a fantasy in which white people are somehow "oppressed" by nonwhites and in which "white civilization" is "under siege" by nonwhite and non-Christian immigrants, as well as people of color more generally. Blacks and most other nonwhites, according to this fantasy, exist in a parasitic relationship to "white society." In the United States, white nationalists circulate old stereotypes about "black crime," "urban violence" and "black poverty," presenting black people as victims of their own "bad culture" rather than institutional white racism.

Trump used the phrase "America first." This has a history. The America First Committee was an anti-Semitic, fascist and nativist organization founded in 1940 to prevent the United States from entering World War II. David Neiwert, author of a forthcoming book on Trump and the radical right, explained this to Salon:

Trump has a habit of hearkening to old white-nationalist and anti-Semitic themes in his speeches that dates back to the campaign and before. "America First," in its previous incarnation, was not only anti-Semitic but proved to be a nest of racists and traitors who eventually plotted to create a Vichy government obedient to the Nazis when America lost the war, as they believed it inevitably would. There's a reason their themes resonate with the new occupants of the White House.

Historian Paul Harvey also explained to Salon the historical continuities between Trump's use of "America first" and its origins with the America First Committee:

But the rest of [Trump's] speech then takes up the America First theme, and the theme of "loyalty" to America above all, that comes straight from the white nationalist playbook. The America First Committee, of course, basically supported fascist forces just prior to World War II. Even if people don't know that historical referent, they will recognize that it is the "other" that threatens America, and "the other" (the immigrant, the liberal, the press, etc.) that does not put America first and is not loyal.

The same goes for having strict borders again. This part of the speech basically recapitulates anti-immigrant sentiment of the 1910s and 1920s that resulted in the National Origins Act of 1924 — in those days, directed against Southern and Eastern Europeans. The target is different now, but the impetus is the same.

Trump emphasized that he's a champion for "the forgotten men and women of our country." This is not apolitical or race-neutral language. Trump is a demagogue who has deployed right-wing "producerism" and its themes of white victimhood by "the other" (immigrants and people of color) and "elites" to win the White House.

And Trump's "forgotten men and women" are not immigrants hiding in the shadows of American life or people of color struggling against police brutality or discrimination in the job market.

Trump's "forgotten Americans" are clearly meant to be the angry white voters who installed him in office. Despite this group's status of having been economically, politically and socially privileged (and subsidized) throughout the history of the United States, its current members now feel itself oppressed and disadvantaged. This narrative of "white oppression" and this anger about "reverse racism" are central to white nationalist and white supremacist thought. Sociologist Jessie Daniels, author of the book "Cyber Racism: White Supremacy Online and the New Attack on Civil Rights," offered this commentary:

Trump's rhetoric in his inaugural address was filled with winks and nods to the white nationalists among his base. In the speech, despite saying that is he going to heal divisions, he clearly sets out those who he's for and those who are the "enemies." He is for: "The forgotten men and women of our country will be forgotten no longer,” a nod to white people, and tells them "This is your country."

Trump possesses an apocalyptic view of American society and wants to stop "the carnage." This narrative is frequently employed by right-wing groups in Europe who believe that "white civilization" is under assault. Bannon and other members of Trump's team are in close contact with such organizations and their leaders.

The idea of "carnage" against (white) America is also an idea tied to white terrorist organizations such as the Ku Klux Klan and other old-line white supremacist groups. Historian Cynthia Iyerly explained:

The original Ku Klux Klan used a rhetoric of black criminality to justify their campaign of terror. Klansmen claimed that white women were not safe from black rapists and that arsons by black people were epidemic. The Klan painted a picture of the white South as besieged by black crime and political corruption. The Klan and their supporters had newspapers that promoted their false version of events, and when Congress investigated Klan violence, klansmen and their political supporters routinely perjured themselves by both denying Klan terrorism and by conjuring up images of black criminals running amok.

Trump is fixated on building a wall along the Mexican border, stopping "illegal immigration" from South America, Muslim "terrorists" and "inner-city crime." All these fixations are among the primary goals of white nationalists and white supremacists. In an earlier conversation with Salon, James Scaminaci, an expert on the American right and its connections to militia groups, described this as an application of "fourth-generation warfare" to American society:

This is where religious supremacy and white supremacy link up, and where Trump is attempting to fuse [them] in his own person.

Internally, this clash of cultures is weaponized as propaganda campaigns designed to delegitimize whole classes of peoples: Blacks and civil rights and voting rights; women and reproductive rights; LGBTQ and gay rights; workers' and labor rights; environmentalists and environmental laws and science.

Trump’s core policies are all consistent with Lind’s writings since 2005. Lind called for a Berlin-style wall on the U.S.-Mexican border, supported the Minutemen militia on the border, likened Latino and Muslim immigrants to invaders that had to be stopped, considered Muslim immigrants an imported cultural disease — and, if good immigrants came in, it was the destructive black culture that turned them bad — and opposed Wall Street conservatives.

Lind’s ideas have circulated throughout the right wing for just over a decade. Trump is just telling members of the Republican base what they have already heard or read.

Trump's inaugural address was full of contradictions but skewed towards his white nationalist base. If patriotism and bleeding for one's country means an American nationalism, then his policies would skew towards inclusion and equality. We all love our country and no demographic has failed to pay the ultimate price to secure our freedom. An American nationalism would make voting easier, not harder. He would not be accusing Democratic voters of fraud. He would not be accusing scientists of lying about climate change. He would not choose Sen. Sessions [the attorney general nominee] to enforce civil rights laws. But Trump meant not a word of it in his address and his subsequent executive orders and his cabinet choices.

Trump spoke of "mothers and children trapped in poverty in our inner cities" and "the crime and the gangs and the drugs [that] have stolen too many lives and robbed our country of so much unrealized potential." These are standard Republican dog whistles recalling Lee Atwater's infamous "Southern strategy" and its goal of ginning up white racial animus against people of color (and black Americans in particular) to ensure electoral victory.

In keeping with "color-blind racism," Trump tried to mask his white racist appeals and coded language with appeals to America's "diversity." As Harvey explained to Salon, this type of deflection can be difficult to counter:

Since unalloyed white nationalism is not acceptable, it has to be couched in historical terms. So he throws in a couple of phrases towards the mainstream idea of pluralist America, such as, "It's time to remember that old wisdom our soldiers will never forget, that whether we are black or brown or white, we all bleed the same red blood of patriots." But then he devotes about half the speech to his — mostly, although not totally — white nationalist base. The economic pseudo-populism and the racial populism are so artfully woven together that it's hard to disentangle them — exactly, I think, what got him over the hump in Michigan, Wisconsin and Ohio.

In many ways, Trump's inaugural address was a white nationalist manifesto. As such, his actions since taking office should not be a surprise. He has issued executive orders barring Muslim refugees from entering the U.S., while giving preferential treatment to Christians. Trump has removed language on the White House website about enforcing civil rights for all Americans and replaced it with "law and order" rhetoric about empowering the police. He has also threatened to impose martial law on black and brown communities in Chicago. He avoided any mention of the Jewish people in issuing the official White House statement on International Holocaust Remembrance Day. He will apparently go ahead with his famous wall along the Mexican border.

Trump's inaugural address and his executive orders since then highlight how radical beliefs and attitudes have now fully taken over the Republican Party and how, once again, conservatism and racism are one and the same thing in the post-civil rights era. Unfortunately, much of the news media has normalized the racism, ethnocentrism and bigotry of Trump, the GOP and their voters as merely a difference of political opinion or a natural function of "polarization" and "partisanship." This "both sides do it" model of journalism was ill prepared to stop the rise of Trump's racist and proto-fascist and racist movement. For the most part, the media now appears poised to continue normalizing Trump and his aberrant politics.

Democrats and other people of conscience cannot and should not negotiate with a president and political party that exhibit such beliefs and positions. Those who choose to seek compromise or who surrender will pay a steep price.