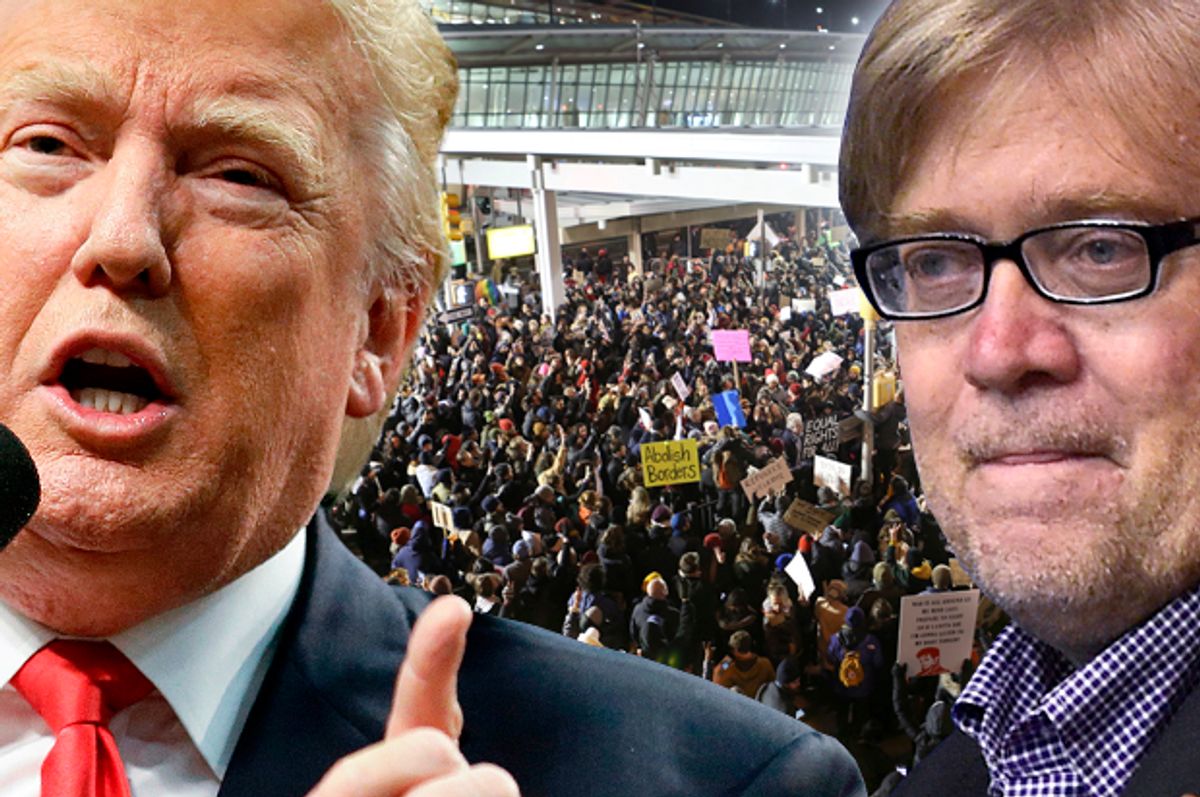 There was so much going on in President Donald Trump's first week of presidential decrees that it was hard to keep track of it all. The most acute problem, in that it immediatelyaffected people's lives, was the executive order issued on Friday that banned entry to the United States for immigrants, refugees or visitors arriving from a list of certain Muslim-majority countries designated as having terrorist activity. On Saturday when it became clear that the ban was taking effect immediately and people were being denied entry or told at their point of origin that they could not board U.S.-bound planes, all hell broke loose.

Nobody understood the rules. Passengers were being held and interrogated. Chaos ensued at international airports all over the country. Protesters gathered en masse at terminals to show their solidarity. Immigration lawyers arrived to help detainees and their families navigate a system that nobody understood — because it was arbitrary and constitutionally dubious. The world reacted with disbelief.

Finally several federal judges issued stays, for a variety of reasons, in response to suits filed by civil liberties and immigration attorneys around the country. Even hawkish constitutional experts were appalled.

It was a shocking moment in American history.

But we shouldn't have been too surprised. Trump had promised to bar Muslims from entering the country during the campaign, famously making a speech after the San Bernardino, California, terrorist attack, saying it had to be done until the U.S. "could figure out what the hell is going on." He modified his remarks later, apparently at the urging of former New York mayor Rudy Giuliani, who bragged that he had told Trump he could bar Muslims from gaining admittance only by nationality rather than religion (while offering priority to those practicing a different religion) or he would run afoul of the Constitution. Now the Trump administration has absurdly proclaimed that it was  just following former president Barack Obama's lead (an assertion refuted by The Washington Post's Glenn Kessler.)

On Saturday it soon became apparent that the order did not just apply to refugees or even visa holders but was also being used to deny entry to legal U.S. residents — green card holders who had been out of the country. It wasn't long before leaks filtered out of the administration that Trump's senior strategist, former Breitbart chief Steve Bannon, had personally overruled a Department of Homeland Security's official finding that such legal residents would not be included in the ban. After an uproar, Homeland Security Secretary John Kelly finally clarified that legal residency would not be "a dispositive factor in our case-by-case determinations," basically meaning that individuals would not be denied entry and deported simply for being legal residents instead of citizens. Sen. Rob Portman of Ohio, a member of Trump's supposed party, wryly observed: "You have an extreme vetting proposal that didn't get the vetting it should have had."

The situation remains confused and fluid. But the fact that Bannon had the ability to do what he did suggests that he's going to use his power to advance his white nationalist agenda. And his power is growing substantially. While the Muslim ban got most of the attention over the weekend, it was also revealed that Bannon had been named a permanent member of the National Security Council, even as the administration denied that status to the chairman of the Joint Chiefs of Staff and the director of national intelligence.

When asked to explain this, White House press secretary Sean Spicer said on ABC's "This Week" that "the president gets plenty of information from the chairman of the Joint Chiefs of Staff" and pointed out that Bannon is a “former naval officer" with a “tremendous understanding of the world and the geopolitical landscape that we have now.” Bannon left the service in 1983.

Indeed, Bannon's "understanding" of the world is exactly what has people concerned. Bannon has become Trump's most influential adviser and (along with Stephen Miller, a former aide to attorney general nominee Jeff Sessions) seems to be guiding Trump toward his goals, even if the president is clueless about the details or the ramifications. Bannon is a radical white nationalist whose main objective, as he has openly admitted, is to blow everything up — essentially to destroy the existing social and political order. What that leaves us with after the smoke clears is anyone's guess, since he is notably vague on the endgame.

Recall that a year before he  joined the campaign, Bannon was telling people that he was Trump's unofficial "campaign manager" and was quoted in an email as saying, “Trump is a nationalist who embraces [Sen. Jeff Sessions’] immigration plan.” Nonetheless, as recently as last summer Bannon told Vanity Fair that Trump is a “blunt instrument for us. I don’t know whether he really gets it or not."

At this point, it seems obvious that it doesn't really matter. Trump is a narcissist with a very few simple bedrock beliefs, most of which intersect nicely with Bannon's propaganda and tactics — which happen to intersect with  global right-wing nationalism, manifested in the U.S. as the alt-right. This movement was well described by Vanity Fair's Henry Porter in an article about Trumpism and Brexit:

They mistrust the political establishment and elites, in general; their rhetoric on immigrants is sometimes openly racist; they have a longing for past glories and the old order of things; they are very, very angry; and they present new levels of immunity to verifiable facts and expert opinion.

That worldview is reflected in far right movements and parties in the  U.K. (the UK Independence Party), Germany (the Alliance for Germany), the Netherlands (the Party for Freedom) and France (the National Front), among others, and some of these movements have also been cultivated by the Russian president Vladimir Putin. (There is evidence of his government's attempts to meddle in European elections, in a similar fashion to what allegedly happened in the U.S. during the recent presidential campaign.)  This is the worldview that is likely to inform President Trump on policy.

You can see this perfectly manifested in the first week's orders on (nonexistent) voter fraud, immigration and deportation policies. The ban on Muslims from certain countries has particular national security implications, in that experts believe it will be a splendid propaganda tool for ISIS and will drive a wedge between the U.S. and many of its allies — something that fits perfectly with Bannon's overall "blow it up" philosophy.

As Bannon said last summer, Trump is just a "blunt instrument" and at this point it doesn't matter if he "gets it" or not. In his new role as Trump's Rasputin, Bannon is now in a position to literally make his dreams of destruction come true.