Forget impeachment: Donald Trump can be driven from office, but probably not that way

Trump's erratic conduct could lead to his downfall. But impeachment is unlikely, and Democrats must dig in 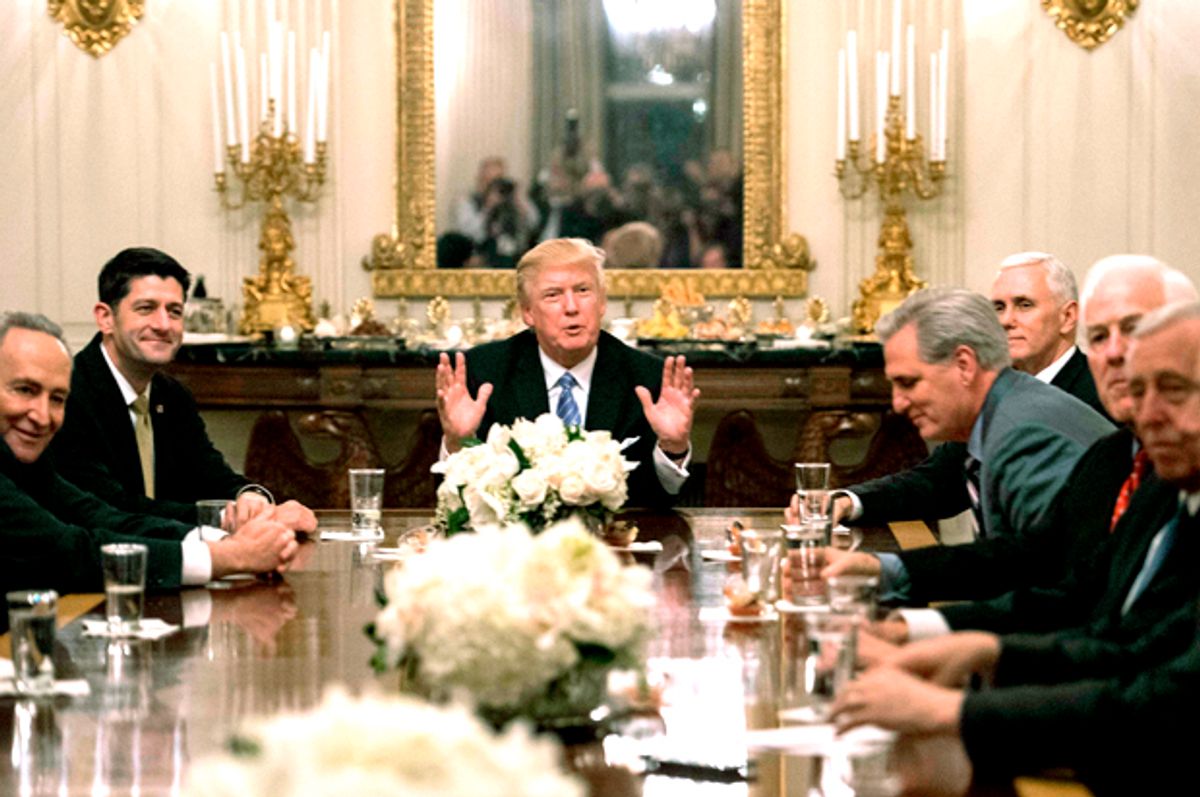 Before we jump in, I’d like to preface this column with an “anything can happen” caveat. The last 18 months have been completely unpredictable, and even the most educated forecast could easily be rendered irrelevant given the erratic fusillade of nincompoopery from Donald Trump and his team. There’s always hope, and there’s always the possibility of a surprisingly favorable outcome in this awkwardly mercurial era.

We simply don’t know how far south President Trump’s approval numbers will descend, given his irrational, insecure, thoroughly unpresidential behavior and the emerging bloc of Democrats and sensible Republicans who emphatically despise him and his goon squad.

But all things being equal, it’s highly unlikely Trump will be impeached and convicted while the Republicans still control both chambers of Congress.

As much as we would all love to witness such an event, the tendency for establishment GOP players to put party ahead of nation precludes their making rational choices concerning Trump’s presidency before significant damage is inflicted, politically and otherwise. While there is surely a comprehensive menu of impeachable offenses on the current police blotter and still to come, it’s next to impossible to see House Republicans proceeding with substantive investigations and an eventual vote to impeach.

Simply put: Should Trump be impeached? Absolutely. Will he be? Unlikely.

Then again, midterm elections are around the corner. As a side note, an off-year election is also coming up next November — the first of many chances for the left to infiltrate local and state governments, school boards, city councils, mayorships and so on. Entering the establishment at the local level is a vitally crucial step in a long-term strategy of taking back the nation from those who reject science, math and reality for “alternative facts.”

So, there’s that. Back to the 2018 midterms: On the House side, the Democrats will need to walk away with a net gain of 25 seats. That's a Herculean task, rivaling the gain of 31 seats the Democrats gained in the landmark 2006 midterms, in the midst of a failing war in Iraq and one year following Hurricane Katrina. We don’t yet know how horrendously unpopular Trump will become, however — not to mention the potential unpopularity of Republicans who foolishly lashed their wagons to the star of this flailing, unhinged cartoon character.

The other X factor is whether Democrats and progressive activists will hunker down and unify enough to win. I’ve learned over many heartbreaking elections that it’s unwise to bet on the Democratic establishment to be reliably hard-core with its tactics, especially when fighting for red districts. Again, it’s possible, but it's too early to call.

On the Senate side, 33 seats are up for re-election, as always. But the 2018 elections offer a terrible map for Democrats. The Dems need to pick up a net of three seats, but most of the contested seats for 2018 are already held by Democrats and, worse yet, only eight Republican seats are in play. Simply put: The Democrats would need to successfully defend all 25 of their seats, while winning three of eight Republican-held seats. Anything can happen. We can't yet know how toxic the Trump GOP brand will become by 2018, but the Democrats' winning back the Senate with this map seems like a long shot, to put it mildly.

The upshot is this: The Democrats need a majority in the House to impeach someone. They also need votes of 67 senators to convict a person. (For that matter, they also need provable high crimes or misdemeanors before anything else happens.) Without a multitude of Republican votes, the entire scenario is a nonstarter — even after a possible Democratic sweep of the House in 2018.

All that being said, impeachment shouldn’t be the animating factor for getting out the Democratic vote in 2018 anyway. The Dem strategy for the midterms obviously has to be centered around a juggernaut-like effort to block Trump’s nefarious agenda, at least at the legislative level. When it comes to implementing an impeachment strategy, the best the Democrats can hope for is to make all kinds of gains in 2018, then to supplement those gains in 2020. If we also get a Democratic president and Democratic majorities in both chambers by 2020, great! If not, let the impeachment debate begin again.

Is there another way? Can Trump be removed from office without an impeachment and conviction? Possibly. If you recall your history, president Richard Nixon was in the process of being impeached as a consequence of the Watergate revelations, but that process never reached the House floor for a vote. It was ultimately the GOP establishment, led by senator Barry Goldwater, who approached Nixon and asked him to step down for the good of the nation.

The odds of this occurring with Trump seem high. Pre-inauguration catastrophes aside, Trump’s entire first week in office was largely about his deranged obsessions and vendettas. Not more than several days in, for example, Trump held a closed-door meeting with congressional leadership and reportedly wasted much of that time ranting about his crowd sizes and a kooky Alex Jones conspiracy theory about voter fraud. That’s only one of many harrowing stories of Trump’s disturbing behavior inside the White House. Suffice it to say, members of the congressional leadership have to know about this. They’re witnessing it first hand.

Can he descend further into madness? Sure. He’s a weak, insecure and blindingly delusional man who can’t stop relitigating trivialities like his crowd (or hand) sizes. There’s a very real possibility that as his presidency grows increasingly embattled, he’ll become more isolated and secluded, perhaps locking himself inside a random safe space somewhere in the White House, trapped in a Mobius loop of obsessions and delusions, poring over cable news while photographs of the inaugural crowds and protest marches litter the floor — and his Sharpie marker scribblings all around. Basically, this would be Howard Hughes at his worst. Knowing Trump’s behavior so far, coupled with the reality that he doesn’t seem mentally or physically prepared for the stress and rigors of the presidency, some version of the Nixonian endgame seems plausible.

Finally, the other factor here is the condition of the economy. If there’s a recession or a sudden uptick in the unemployment figures, Trump will likely accuse the numbers of being “fake news.” But Americans may be less patient with this unlikable, garish cartoon character whose central campaign promises aren’t panning out. Don’t forget: He repeatedly declared himself to be “the greatest jobs president God ever created.”

If there's anything shy of that, we’ll see moderate and independent Trump voters jumping ship, leaving only the dregs and the hotheads to flack for Trump on Fox News. Conversely, however, we shouldn’t ignore the possibility of a military conflict or, heaven forbid, a major terrorist attack. Both are nightmare scenarios, to be sure — as we know the lives at stake. Politically speaking, there’s the distinct possibility of a suddenly very popular Donald Trump sitting in the Oval Office with virtual carte blanche from a scared population. Sleep tight.

This is all to suggest that, yes, Trump can be driven from office prematurely. He’s his own worst enemy and he continues to inadvertently reveal himself as mentally unfit to fulfill the duties of the presidency. But hoping against hope for a legislative vote to get him out is a red herring.