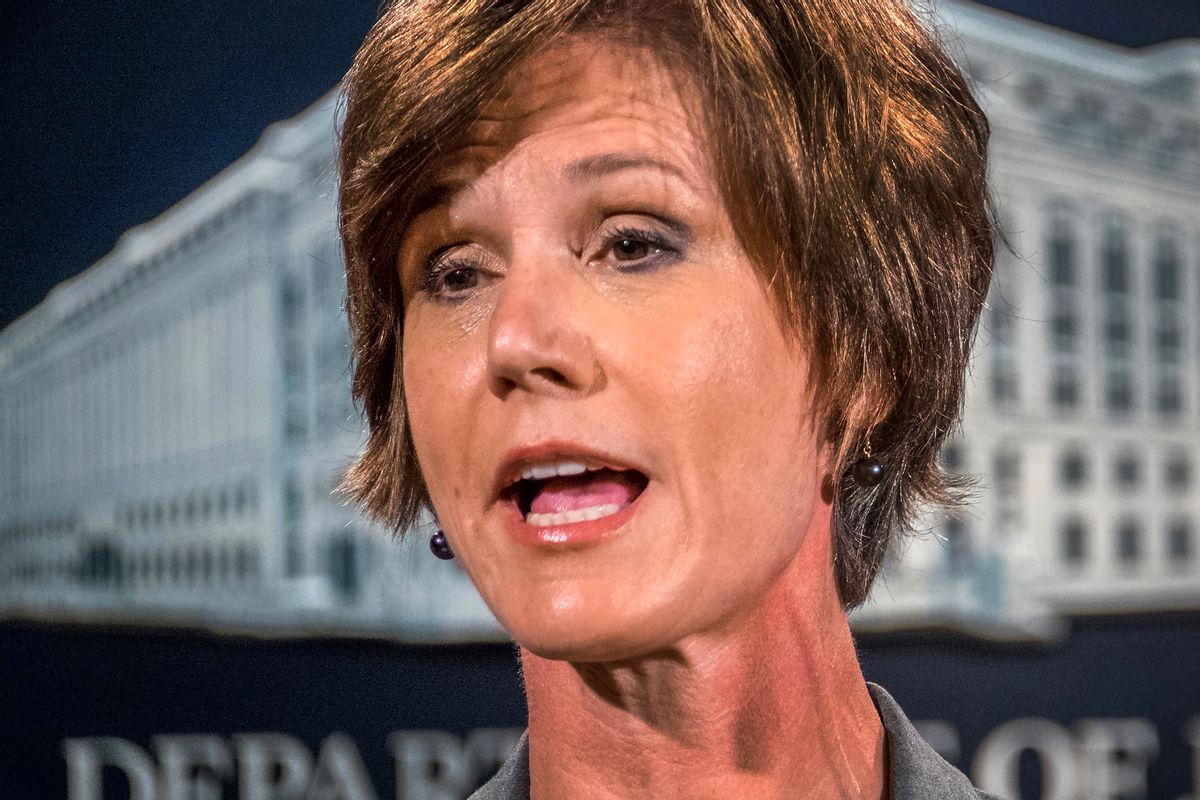 After President Trump fired acting attorney general Sally Yates on Monday for refusing to carry out his Muslim immigration ban, his critics blasted the decision, even as conservatives were split on the choice.

Trump's allies, naturally, praised their president for removing someone he claimed had "betrayed the Department of Justice by refusing to enforce a legal order designed to protect the citizens of the United States." They also took advantage of a phrase that Trump once made famous.

Trump practiced "you're fired for years". Today he applied it to an insubordinate acting atty general. Congratulations.

@POTUS says to "Acting" AG--"You're Fired!" Refreshing to have Pres w/ guts to fire arrogant and belligerent staff not elected to anything.

Former White House counsel John Dean — who was key in President Richard Nixon's "Saturday Night Massacre" during the height of the Watergate scandal — was highly critical of Trump's choice.

The way the Trump presidency is beginning it is safe to say it will end in calamity. It is almost a certainty. Even Republicans know this! — John Dean (@JohnWDean) January 31, 2017

In a press release on Monday morning, House Minority Leader Nancy Pelosi wrote that "the Acting Attorney General was fired for upholding the Constitution of the United States.  What the Trump Administration calls betrayal is an American with the courage to say that the law and the Constitution come first." Meanwhile, Senate Democrats were outspoken in their disgust at Yates' termination.

Tonight, Acting AG Sally Yates was fired for standing up in defense of our Constitution. Our nation owes her a debt of gratitude.

Sally Yates did not betray the Justice Department, she honored its greatest traditions by defending our Constitution. https://t.co/oOVAhKPXQK

Firing of Sally Yates underscores how impt it is to have an Attorney General who'll stand up to the WhiteHouse when they violate the law.

The American ppl should know exactly how ind. Sen Sessions plans to be when the WhiteHouse violates the law BEFORE the Senate votes on him.

The AG should pledge fidelity to the law & the Constitution not the WhiteHouse. The fact that this admin doesnt understand that is chilling.

The brouhaha over Yates' firing is likely to subside once Sen. Jeff Sessions of Alabama is confirmed as her replacement.