Signs of trouble on Team Trump? Jeff Sessions could be in trouble; Michael Flynn could be toast

Sessions looks worse in the wake of Sally Yates' firing; Flynn may be too erratic even for the Trump White House 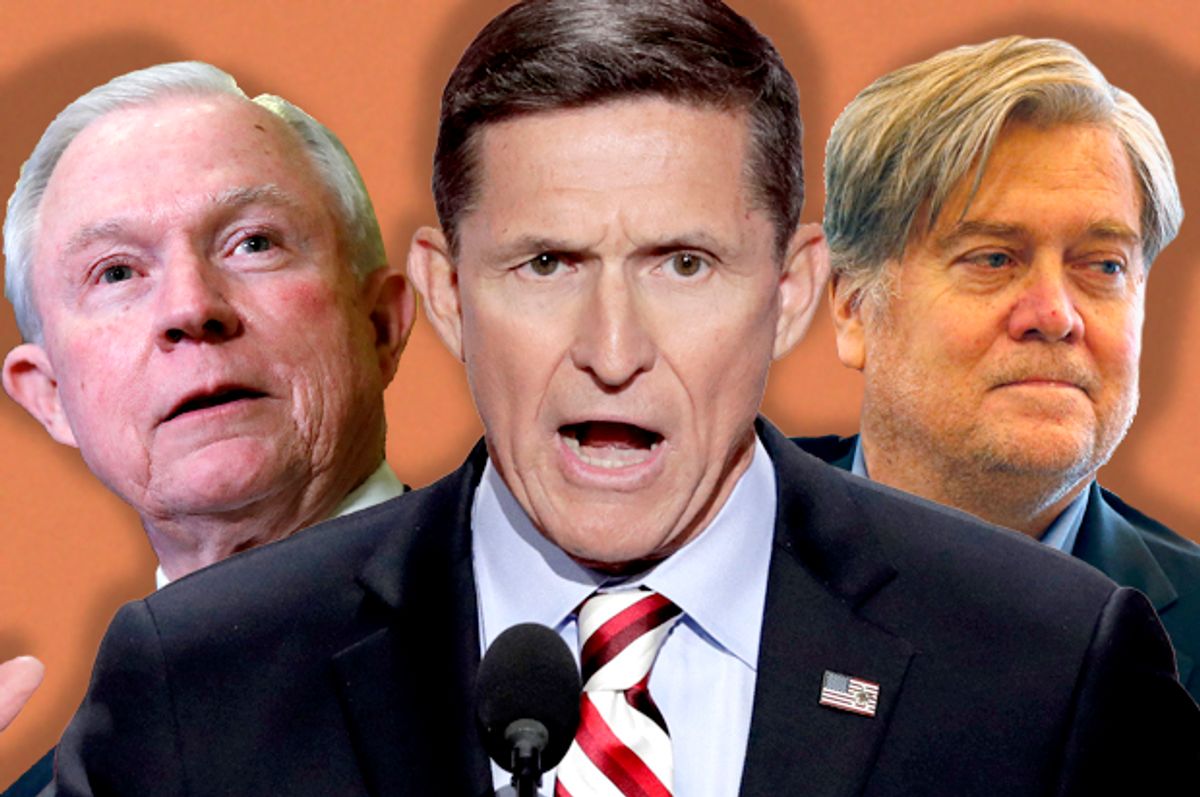 Late on Monday night, President Trump fired Sally Yates, the acting attorney general left behind by the Obama administration. Citing both the law and the Constitution, Yates had ordered the Department of Justice not to defend Trump's ban on Muslims from certain countries entering the United States. Republicans all applauded the firing, calling her insubordinate because it was her job to carry out his orders — no questions asked.

Democrats hailed her as a hero for asserting the independence that's supposed to be conferred upon the office. To back this up. they produced footage of Sen. Jeff Sessions himself — yes, now Trump's nominee for attorney general — telling Yates during her confirmation hearing that she was obligated to say no if she believed the president's order were unlawful.

At this point it would behoove the Senate to think very, very hard about confirming Sessions as the new attorney general. It's hard to imagine that he would ever say no if Donald Trump wanted him to execute an unlawful order. On the other hand, it's also hard to imagine that Trump would ever ask him to execute an unlawful order that Sessions didn't enthusiastically agree in advance should be executed, so perhaps it's a moot point.

Nonetheless this crisis should induce Democrats to stiffen their spines and vote against Sessions. According to a Washington Post article, it's just a preview of what's to come:

The early days of the Trump presidency have rushed a nationalist agenda long on the fringes of American life into action — and Sessions, the quiet Alabam­ian who long cultivated those ideas as a Senate backbencher, has become a singular power in this new Washington.

Sessions’s ideology is driven by a visceral aversion to what he calls “soulless globalism,” a term used on the extreme right to convey a perceived threat to the United States from free trade, international alliances and the immigration of nonwhites.

Sessions’s nomination is scheduled to be voted on Tuesday by the Senate Judiciary Committee, but his influence in the administration stretches far beyond the Justice Department. From immigration and health care to national security and trade, Sessions is the intellectual godfather of the president’s policies. His reach extends throughout the White House, with his aides and allies accelerating the president’s most dramatic moves, including the ban on refugees and citizens from seven mostly Muslim nations that has triggered fear around the globe.

Even Republicans should be leery of confirming this man as the nation's most powerful law enforcement official. But they are afraid. As former GOP congressman Richard Jolly told Lawrence O'Donnell on MSNBC last night, "The reason Republicans won't speak out is because we have a president who will destroy you with a single tweet."

Still, defeating Sessions is not entirely impossible. If the Democrats all stuck together, it would only require three Republicans to say no. I have no idea who those profiles in courage might be — and Sessions is said to have ideological tentacles throughout the new administration. According to the Post:

The author of many of Trump’s executive orders is senior policy adviser Stephen Miller, a Sessions confidant who was mentored by him and who spent the weekend overseeing the government’s implementation of the refugee ban. The tactician turning Trump’s agenda into law is deputy chief of staff Rick Dearborn, Sessions’s longtime chief of staff in the Senate. The mastermind behind Trump’s incendiary brand of populism is chief strategist Stephen K. Bannon, who, as chairman of the Breitbart website, promoted Sessions for years.

So even if Sessions ends up back in the Senate rather than at the Department of Justice, his antediluvian ideology will be well represented in the Trump administration. There's no escaping it.

Of course a big part of the problem with the Trump administration isn't ideological, although that's certainly an issue. It's also the incompetence — and that's turning out to be overwhelming. It's no longer a simple matter of an amateur-hour convention or a poorly planned inauguration. It's not even about a clownish display of celebrities traipsing through the lobby of Trump Tower and calling it a transition. The Trump team has a real job to do now and its members are executing it very, very poorly. (One might even say that they are running the country the way Donald Trump ran the Trump Taj Mahal in Atlantic City, which went bankrupt.)

Then there is the palace intrigue, the details of which are leaking like the Titanic to every reporter in Washington. Over the past few days we've been hearing a lot about Sessions and his protégés — and also about Steve Bannon, Trump's apparent Rasputin, who has now been elevated to an exalted (and unprecedented) position as an adviser on foreign policy.

This raises the question of what happened to Michael Flynn, the crazed alt-right general who was supposed to be Trump's versions of Patton, MacArthur and "Black Jack" Pershing all rolled into one. Glenn Thrush and Maggie Haberman of The New York Times have the scoop on that: It looks as though he has seriously lost favor.

Flynn was a favorite of Trump's when the retired general was heaping contempt upon Hillary Clinton, but Flynn evidently hasn't worn well with the boss since he vanquished her. Sources tell the Times that Flynn is seen as talking too much and his Pizzagate-enabling son has been a thorn in the administration's side. There are also whispers about Flynn's being too close to certain fringe characters, which is true but also profoundly self-serving since Bannon and Trump himself are closely tied to the same elements. According to the Times' juicy dish, Rex Tillerson, Jim Mattis and Mike Pompeo convened a meeting this week and didn't invite Flynn — because he was the subject of discussion. The claws are definitely out.

This may be the most encouraging bit of news we've had since Trump was inaugurated. Sessions and his crew are scary ideologues. Bannon is a frighteningly adept propagandist with a dangerous worldview. Mike Pence and Paul Ryan are far-right conservative movement zealots with a blank check. Trump himself is unfit and way over his head, and the whole administration is incompetent on every level. But Flynn seems to be certifiably unhinged, even by the standards of this unbalanced crew. If the Trump administration is  looking for ways to ease him out, thank goodness for small favors. One less kook in a White House full of them is a baby step in the right direction.