The first lady is no prisoner: #FreeMelania ignores the fact that Mrs. Trump is part of the problem

Sure, Melania doesn't look very happy, but the meme suggesting she's held against her will is retrograde and sexist 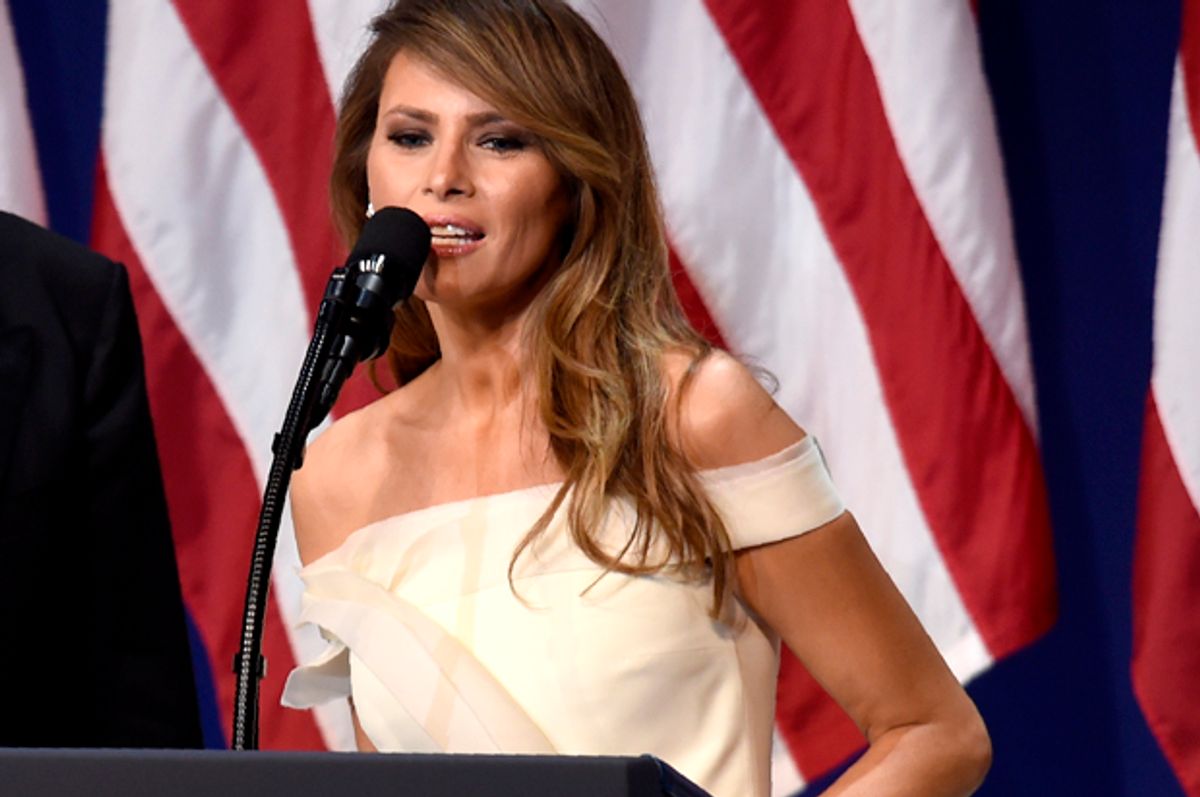 Melania Trump is the "First Lady of Constant Sorrow" — or at least, that’s what Twitter would have you believe.

The inauguration ball anointing Donald Trump as the 45th president of the United States was designed to be a victory lap for the newly throned leader of our nation — akin to handing the prom king a robe and a ceremonial sash. But the couple’s first dance seemed to speak to an uncomfortable truth about their marriage: Melania is deeply, powerfully unhappy, her expression pained as her husband attempted to pull her closer. The website Mic even tapped a relationships expert to analyze the first lady’s body language, and the conclusion was a message any seemingly sane woman would share: “I don’t want to merge with you as a partner.”

The GIFs, it seems, spoke a thousand words, even as Melania herself has remained silent since the election — eschewing many of the responsibilities typically allotted to the commander in chief’s wife. Those duties will reportedly be handed to Ivanka Trump, the president’s daughter — an assertion Ivanka vigorously denies.

You’ve probably seen the photos by now. There’s the one of a false grin fading to a frown as Melania’s husband turns away. What about the scene of Donald Trump being greeted by his predecessor, Barack Obama, and Michelle Obama, their generosity juxtaposed with Melania Trump, trailing behind her tangerine beau with a giant Tiffany box in tow? A popular joke on Twitter is that the mystery gift contained a note pleading, “Help me!” Talk show host Chelsea Handler, who led a women’s march in Park City, Utah, as crowds gathered for the Sundance Film Festival, added fuel to the fire when she tweeted: “Melania: blink twice if you need help.”

The resulting #FreeMelania hashtag, which spawned dozens of mock protest signs at marches, ascribes victimhood status to the first lady. She is not only discontent but also trapped, yet another survivor of Trump’s abuse.

Leaked audio from behind the scenes of a 2005 appearance on “Access Hollywood” revealed that the Republican politician bragged about sexual assault. He claimed that when you’re a celebrity, women let you do whatever you want to them. Following the release of that tape, several women came forward to say that actually you can’t assume you have a woman’s consent just because you’re a billionaire with an ego as large as your hairpiece. When People magazine reporter Natasha Stoynoff visited Mar-a-Lago, Trump’s private resort to interview the couple for a cover story in 2005,  he cornered her in an empty room and forced himself on her, she has recently claimed. Many other alleged victims have detailed an extremely similar pattern of abuse.

There is a nugget of truth to the assertion that Melania is another woman who has suffered at his tiny hands. Many women whose husbands victimize others also target their wives for emotional abuse: These women are lied to, manipulated and gaslighted by spouses who take advantage of the trust that comes with saying, “I do.” A reason it takes victims an average of seven attempts to leave their domestic abusers before they are successful is because of their tendency to look past and excuse the behavior of people they love. “He didn’t mean it,” one might assert. “That’s not who he is.”

It’s important to recognize those realities, but #FreeMelania isn’t as much about the alleged undercurrent of the Trumps’ marriage as it is about our discomfort with women who make choices that appear to be against their own interests. This not only robs Melania of her agency but it also ignores that fact that millions of women, when given the opportunity, have made the exact same decision — voting for a man who refers to women as slobs, fat pigs and dogs.

Melania Trump, who was born Melanija Knavs, is a walking contradiction in Jimmy Choo heels. The former model is a Slovenian immigrant who came to the U.S. as an undocumented worker. As The Washington Post has reported, Melania began her career walking down the New York runway without a valid visa. Under a Trump presidency, she would be have likely been sent back to Eastern Europe. In an executive order signed by the POTUS on Wednesday, Trump committed to the removal of an estimated 11 million immigrants “who illegally enter the United States and those who overstay or otherwise violate the terms of their visas.”

Why would someone who has benefitted from clemency in federal immigration policies stand by a leader who wants to block pathways for others to become citizens? Contrary to what you might believe, it’s not because she’s a poor woman lacking other options.

Although marrying a foreign billionaire would suggest that she grew up in dire poverty (like the many mail-order brides who come to the U.S. seeking a better life), Melania was born in Novo Mesto, a wealthy and prosperous town near the Croatian border. The picturesque village, nestled along the ever-winding bends of the Krka River, is a hub of tourism, with travelers flocking to its Gothic cathedrals and the town’s picturesque old city center. Her father owned a motorcycle dealership.

Melania, who married Donald Trump in 2005, has nonetheless benefitted from the power and privilege that her position as the wife of a wealthy businessman affords her. She is an immigrant woman, but she has enjoyed two generations of material comforts — those of her father and husband. She may not believe the issues raised in the women's marches affect her: access to reproductive care, a culture that openly recognizes the sexual assault women face every day and a society that views the consent of women as more important than the aspirations of men.

Since she is one of the wealthiest women in America, they may not. Women across the country will be hurt by the probable defunding of Planned Parenthood, but the first lady will not. In fact, she only benefits from a presidency that creates tax breaks for the rich even while punishing low-income women for wanting access to reproductive health care. Exit polls from the 2016 election show that 52 percent of white female voters (a demographic that includes Melania, despite her being foreign born) made a similar calculation.

Their words speak volumes about the math behind that equation.

“I think he’s a really good man, deep down,” one female Trump voter told The New York Times. “This guy has such potential, and I truly believe he cares about our country and wants to help everyone. . . . What he said about women was disrespectful. But I don’t get offended like some people do. You get through the bad and you focus on the good. Basically these were our choices, and I felt he was the better choice, and I had to overlook the negatives and focus on the positives.”

Although this thinking is popularly referred to as cognitive dissonance, it’s more akin to what’s called “selective exposure theory,” the human tendency to reject information that doesn’t reinforce our pre-existing beliefs. Thus, if the women who voted for Trump want to believe that he’s fundamentally good and caring, they are likely to dismiss any claims that don’t support those views. Many people who cast a ballot for him on Election Day didn’t even believe that he would repeal the Affordable Care Act if sworn into the Oval Office, despite the fact that Trump campaigned on that very pledge.

Since being elected, Trump has also threatened to eliminate the Office on Violence Against Women as part of his campaign to reduce government spending — yet many female Trump voters have continued to stand by their man.

Why would we be surprised then that Melania has done the same, even to the point of parroting her spouse’s rhetoric? It’s comforting to believe that the first lady is the helpless captive of her husband’s nativist appeals, but she told Joy Behar that Trump was correct to question Obama’s citizenship in a 2011 interview on HLN. “It’s not only Donald who wants to see it,” claimed the first-generation American. “It’s the American people, who voted for him and who didn’t vote for him. They want to see that.”

In fact, Melania has done everything in her power to rationalize and normalize her husband’s behavior. The first lady referred to her husband’s conversation with Billy Bush about grabbing women by their private areas as nothing more than “boy talk.”

These are the unfortunate conundrums of feminism — how to deal with a woman who uses the very rights and privileges won by the movement to support misogyny and white supremacy, forces that will serve to roll back those gains. Call it the Kellyanne Conway conundrum. “Saturday Night Live” has portrayed Trump’s right-hand woman as his reluctant mouthpiece, a fundamentally good person tasked with defending the POTUS from whatever lunacy he has wrought through gritted teeth. Kate McKinnon’s Kellyanne isn’t a bad person, just going through the motions of an extremely unenviable job.

What we must recognize, though, is that women will continue to use their freedom to make choices against the interests of gender equality and basic civil rights, just as others have for centuries.

Leni Riefenstahl was instrumental to carrying out Adolf Hitler’s propaganda campaign, filming widely circulated videos of his rallies designed to be proof of the führer’s glory. Margaret Thatcher, the first female prime minister in U.K. history, openly dismissed the culture of sexism in politics that make it difficult for others to follow in her footsteps. Just 22 percent of ministers in the British Parliament are women — a figure that has changed little since Thatcher first took office in 1979. Sarah Palin actively campaigned for Trump after forgoing another presidential run.

These women, like Melania, are not prisoners. They are the jail keepers holding the keys. They are the very thing that women marched against — and what they will continue to fight for the next four years. You shouldn’t cry for Melania Trump, no matter how tempting it is to feel sorry for anyone married to a tyrant obsessed with crowd size. You should resist her.