Payback to the Christian right? Donald Trump owes a huge debt — and Neil Gorsuch is the first installment

Evangelical voters were getting restless with Trump's un-Christian policies. Gorsuch is meant to bring them home 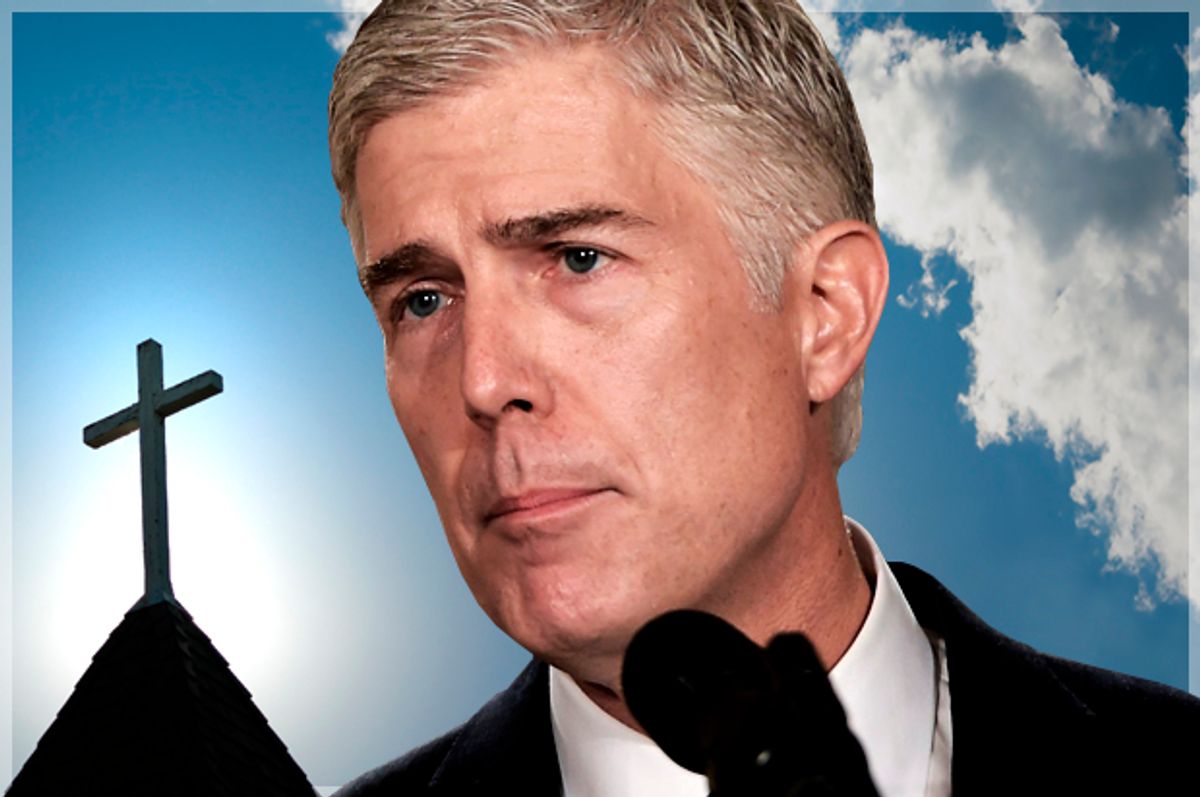 Many theories floating around the internet attempt to explain the appallingly inept rollout of the flurry of executive orders issued during Donald Trump's first few days in office. One is that Trump strategist Steve Bannon believes the most important first step is to thoroughly secure the Trump base's undying loyalty by addressing every campaign promise as quickly as possible. In my opinion, this is as unlikely as the theory that he's implementing a cunning Machiavellian plan to use each new order as a shiny distraction from the last disastrous one. The Trump people are bold, but they're not that organized.

But the fact that the Trump team moved the announcement of the new Supreme Court nominee earlier to Tuesday night from its previously scheduled time on Thursday may lend some credence to both theories. The base was starting to get restless after watching the pandemonium of the first few days and needed calming. There's nothing like a young, far-right Supreme Court justice in waiting to bring together the GOP coalition.

Trump staged the announcement with a corny and manipulative "suspense" plot by calling the two reported finalists to Washington so no one would know who "won" the job until he announced it before the nation at a prime-time ceremony in the White House. Trump obviously plans to run his administration like a cheap reality-TV show, so we'd better get used to this sort of thing.

By now you know that the lucky winner was Judge Neil Gorsuch, a man described by court watchers as having a judicial philosophy to the right of the late Justice Antonin Scalia, whose seat he would be filling. As the son of Anne Gorsuch Burford, the  notorious anti-environmentalist EPA administrator from the Reagan administration, he comes from noble GOP stock — and in this case the apple does not fall far from the tree. Let's just say the business community would have no complaints about his tenure over the next few decades.

But that's not the constituency Trump was concerned about soothing so much that he hurried the announcement forward by two days and staged a stilted prime-time pageant to take everyone's mind off his slow-motion train wreck. The constituency that was starting to get a bit shaky was the evangelical Christians, who have backed him to the hilt despite his libertine ways.

Recall how odd it seemed, during the Republican primaries, that Trump received such a large percentage of the vote of conservative evangelicals when they had true believers with strong track records — most notably Sen. Ted Cruz — to choose from instead. Indeed, Cruz had a sophisticated strategy to win the nomination, predicated on the idea that he would lock up the evangelical vote in an early Southern sweep and make it impossible for anyone to catch up to him. That didn't work out when Trump separated the Republican evangelical community down the middle, appealing to the more modern "prosperity gospel" types while Cruz sewed up the traditional conservatives.

When Trump won and turned to the general election, there was understandable concern among Republicans that those traditional Cruz voters would not be able to stomach voting for someone with such obvious moral failings. That's when the conservative movement stepped in, specifically the Heritage Foundation in conjunction with the Federalist Society. They saved Trump's bacon among the faithful, making up a list of rabidly anti-choice potential Supreme Court nominees for him to choose from if elected. At that point it was clear there would be at least one seat available, since Republicans had decided to stonewall president Barack Obama's nominee, Judge Merrick Garland. So this was a live issue for those on Christian right, who were still feeling bruised by the high court's marriage equality decision.

Over the past couple of weeks some loud rumblings have been heard from the evangelical community. A post from the Institute on Religion and Public Life's First Things about Trump's insistence that "torture works" relayed some serious concerns among Christians on this topic, saying, "It is a central principle of the Christian ethic that one must not do evil that good may come." Even more worrisome for the Trump team had to be the pushback from religious leaders over the administration's ban on travel and immigration from certain Muslim countries. The National Evangelical Association said:

Christians and churches have been welcoming refugees for 2,000 years, and evangelicals are committed to continue this biblical mission. Thousands of U.S. evangelicals and their churches have welcomed hundreds of thousands of refugees over the past 40 years through World Relief and other federally approved resettlement agencies. We don’t want to stop now. The Trump administration’s plans to make severe cuts to the admission of refugees are alarming. We call on President Trump to declare his support for the continuation of the U.S. refugee resettlement program, which is critical at a time when the world faces a significant refugee crisis.

It wasn't just conservative evangelicals who objected. Even reliably conservative Catholic bishops were appalled, promising that their church would continue to offer help to refugees and calling the order "shameful" and un-American.

It doesn't take too much imagination to surmise that someone told the administration it needed to do something quickly to quell this uprising. Judge Gorsuch's appointment will definitely relieve the anxieties of Christian conservatives, at least for a while. He is their dream justice.

Ian Millhiser of Think Progress described Gorsuch as a hard-core culture warrior who could carry on the legacy of Antonin Scalia well into the second half of the 21st century.

“Human life is fundamentally and inherently valuable,” Gorsuch wrote in his book, adding that “the intentional taking of human life by private persons is always wrong.”

As Ed Whelan, a former law clerk to Justice Scalia who writes frequently on the courts puts it, “Gee, might that principle have any application to abortion?”

Trump said he would appoint "pro-life" justices to the Supreme Court and he has fulfilled that promise to a valuable constituency. If social media is any gauge, members of the conservative Christian community is thrilled with the Gorsuch nomination. It remains to be seen if that will be enough to keep them on board the Trump train as he continues to test their moral integrity and religious commitment with cruel and un-Christian policies. They've obviously got some clout. If they decide to use it, it might just make a difference.