Profiles in cowardice: GOP leaders quail before the throne as Trump undermines democracy 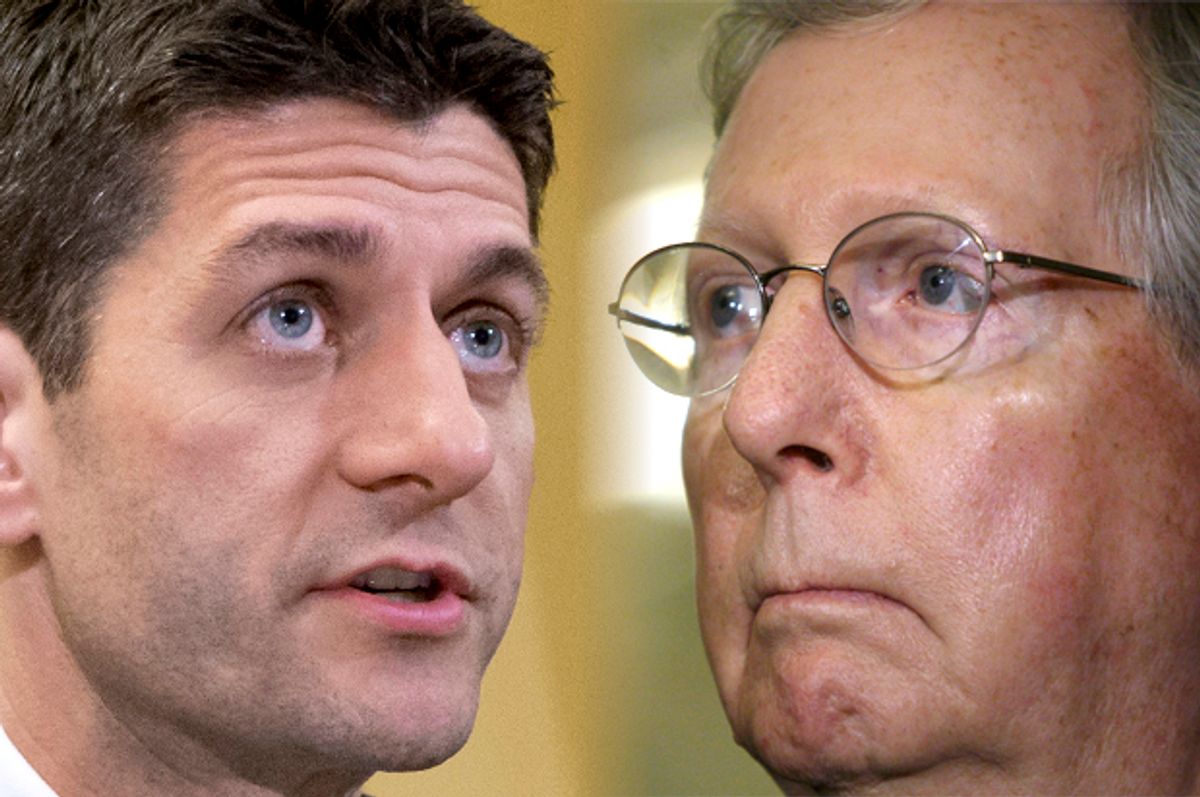 On Monday while Donald Trump’s ban on Muslim immigrants' entering America from seven foreign nations was still causing chaos and fear across the country, House Speaker Paul Ryan was talking about business regulations. At the same time, his Senate counterpart, Majority Leader Mitch McConnell, was working to undo an Obama administration regulation that protects streams from pollution from coal mines.

It was just the latest in a list of about a million or so moments over the last year when the Faustian bargain the Republican Party has made with the jabbering orange buffoon now seated in the Oval Office has become crystal clear. Considering all the norm-shattering going on at the other end of Pennsylvania Avenue, any single element of which would have launched a thousand congressional investigations if committed by a Democratic president, it was a particularly galling display of obsequious toadying to the business interests that McConnell and Ryan really answer to.

Consider this by-no-means-comprehensive list of the weekend’s offenses that were well-known on Monday when Ryan and McConnell kicked off the week by figuring out new and creative ways to poison and screw over the American people:

1. Legal immigrants to America were sitting in detention at major airports and offsite facilities, being bullied into giving up their green cards, and denied access to lawyers by the right-wing yahoos of Customs and Border Patrol, in open defiance of court orders from federal judges.

2. Many of those legal immigrants who were not still in detention had been forcibly deported, often to countries they had just transited through, and, in some cases, they found themselves stranded in foreign airports with no resources or way to return to their countries of origin.

3. Some of the immigrants and visa holders denied entry to the U.S. included children, elderly people and workers and academics on their way back to school, graduate programs and jobs. Other immigrants already here had begun canceling overseas trips to visit their families, for fear they won’t be allowed into the U.S. when they return.

4. The sloppily written and badly implemented executive order that kicked off the weekend’s festivities was drafted mostly by the two white nationalists who dominate the papaya-colored president’s inner circle, Steve Bannon and Stephen Miller. This was done with little or no input from any of the relevant legal offices or departments of the federal government, most of whose staffers were apparently caught by surprise by this whole mess.

It is not being hyperbolic to suggest this is a crisis for American democracy. A narcissistic and evidently unstable figurehead, elected by a minority of the voters through a quirk of an anti-democratic device originally constructed to perpetuate slavery, is turning a nation with a hodgepodge of messy, grinding but somewhat workable immigration laws into a fortress nation whose battlements are manned by right-wing nativists who don’t seem to care about niceties like the law or the constitutional protections guaranteed even to permanent residents or the holders of legitimate visas.

If there ever were a time for congressional leadership to stand up to a president, this would be it. But aside from a milquetoast statement to ABC’s Martha Raddatz on Sunday from McConnell, both the majority leader and the House speaker have been generally supportive of the Trumpian assault on civil liberties, due process and governing norms. Ryan, in particular, has been repulsive. During the weekly House leadership press conference on Tuesday, he offered only vague criticism of the executive order and its implementation, saying it was “regrettable that there was some confusion on the rollout” and that “no one wanted to see people with green cards or special immigrant visas . . . get caught up in all this.”

Ryan should talk to Bannon and Miller. If some of their past statements are to be believed, that was exactly what they intended.

Ryan and McConnell will not fulfill their constitutional duty to serve as a check on the executive branch because the power of their office is more important to them — because they are afraid of the revanchist base of the Republican Party and because it is apparently worth selling out long-cherished ideals of American freedom and openness for 40 pieces of silver. Ryan in particular is unwilling to give up his chance to make America look like the Ayn Rand fan fiction he apparently spent his high school years scribbling in his notebook, instead of paying attention in civics class.

Meanwhile Donald Trump and his coterie of white nationalists are steering the nation far to the right at dizzying speed. The repercussions of their campaign to roll back 70 years of the postwar liberal international order will be felt around the world. It is an enormous gamble to risk the country’s democratic stability in exchange for some tax cuts for big business and the wealthy. One can only hope that congressional Republicans soon find a red line that they are unwilling to let Donald Trump cross, before it's too late to turn back.