The Nevada playbook: Harry Reid's Democrats won big here in 2016 — and it can be done in other states

Democrats racked up huge losses in swing states in 2016. Not in Nevada. What are Nevada Democrats doing right? 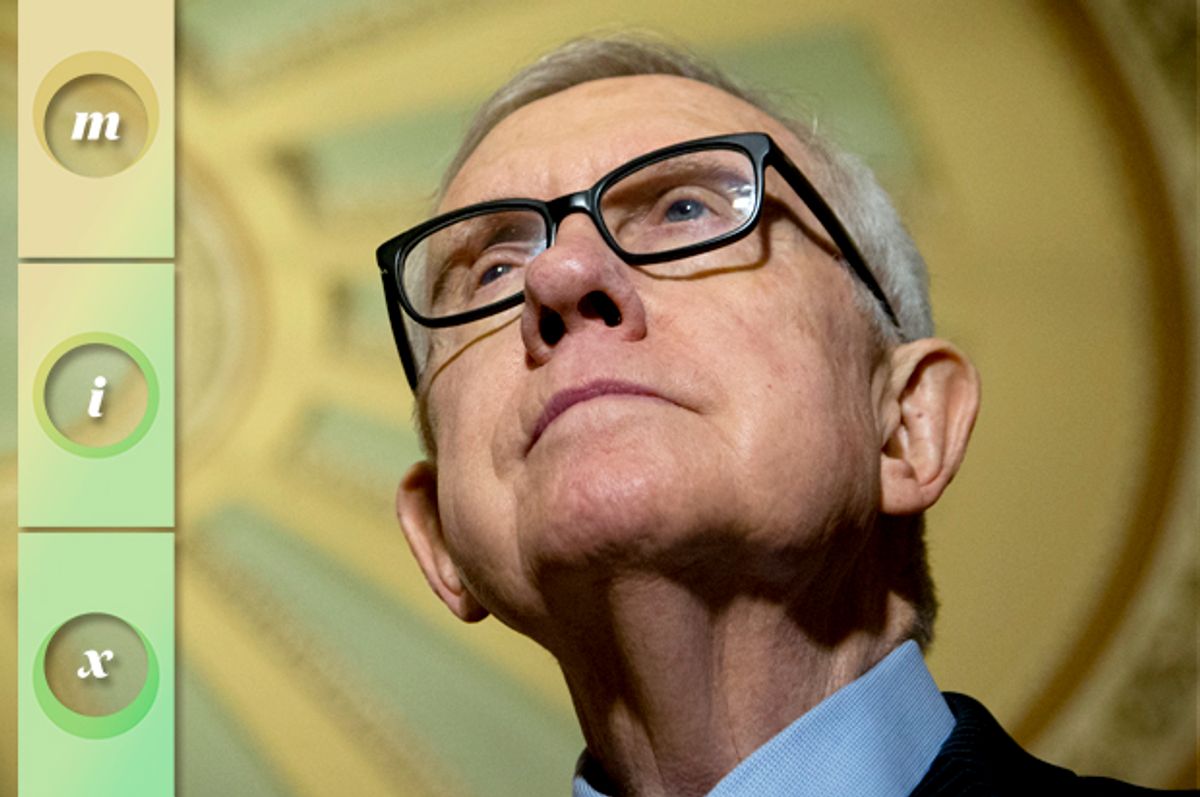 The election of 2016 was a devastating one for Democrats, and not just because Hillary Clinton, seen as a sure winner, lost in squeaker to Donald Trump, a man whose only true professional success up until then had been from playing a villain on a reality-TV show.

All the way down the ballot, Democrats took a beating. While pre-election polling suggested Democrats would be able to flip seven Senate seats held by Republicans, for instance, once the votes were counted, Republicans won five out of the seven contests.

But there was one state, typically considered a swing state, where Democrats did exceptionally well: Nevada.

While Clinton was being handed losses in states like Wisconsin and Pennsylvania, which typically swing left in presidential election years, she won Nevada by 2.4 percentage points. In the Nevada Senate race, Republican Joe Heck was leading in the polls over Democrat Catherine Cortez Masto for much of September and October, but Cortez Masto swiftly gained momentum over the second half of October and won on Nov. 8.

So what do Nevada Democrats have that Democrats in other states are missing? There's a lot of moving parts in any election, but two factors stand out in explaining how Nevada Democrats were able to succeed in a year where the party largely fell flat in other swing states: a powerful  state party machine and a thriving base of union support.

“There is a very aggressive and robust state party that other states just don’t have," said Kristen Orthman, in a phone interview.

Orthman worked for the now-retired senator for years, but over the summer she took a leave from her role as his communications director to work as a senior adviser for the state branch of the Democrat Party during its campaign season. She worked on campaigns at all levels and was well positioned to observation the machinations of the state party, which is often referred to as the "Reid machine" by political junkies in the state.

The nickname sticks for a reason. Multiple sources credited Reid for the health and sturdy infrastructure of the state Democratic party, noting that he made it a priority to nurture the party year-round, in both election years and off years.

"Harry Reid is such a singular figure," said Jon Ralston, a prominent Nevada journalist who has worked for newspapers and as a TV host. Listen to Salon's entire interview with Ralston:

Ralston calls Reid the "meddler in chief" because "there’s nothing so granular" in state politics that Reid won't involve himself in it. The result, according to Ralston, is that Reid has “iron-fisted control of the Democratic Party” of Nevada.

His willingness to make so much time for state politics was all the more remarkable in light of his extensive duties as a national figure. Over the course of his career, Reid served as both the Senate majority and minority leader and, prior to that, he spent time as the Senate minority and majority whip.

Reid put a priority on hiring experienced people for state party positions, even in non-election years, and on year-round networking and fundraising opportunities.

“You have funding," Orthman said. "You have people on the ground; good people, professional operatives that are respected, that know the lay of the land. They are researchers; they are press people; they are political people. They are executive directors that are working with activists and outside groups."

“In order to have an operation like that, you  need a leader who is willing to put political capital on the line to make that happen," she added. "Obviously, Sen. Reid was someone who was willing to do that, and he risked a lot of capital and raised a lot of money for the state party."

One example of what this level of attention and investment can buy: a researcher who can invest the necessary time to keep tabs on Republican politicians, building files with their past statements and actions that can be deployed against them in future races.

"One of the reasons the Nevada Democratic Party has been so successful is that they’ve been willing to make smart investments over the last several election cycles in opposition research — hiring and maintaining full-time staff to make sure they had the time to build strong cases against their targets and the capacity to hold Republicans accountable for their actions in real time," said Matt Fuehrmeyer, the director of research and strategic communication for the Democratic Congressional Campaign Committee. "That kind of investment isn’t cheap, but in Nevada’s case, they definitely got what they paid for."

One of the Republicans who lost in 2016, Rep. Cresent Hardy, cultivated quite the reputation for foot-in-mouth disease, which is likely due in large part to the state Democratic party's investment in opposition research. Even Clinton was heard hammering Hardy on the campaign trail for his 2014 claim, captured during a meet-and-greet at a golf club, that Mitt Romney was right to characterize 47 percent of Americans as freeloaders who live off other people's tax money.

Republican Sharron Angle also had the buzz saw of her past coming back to haunt her, when in 2010 she challenged Reid for his Senate seat. Her reputation for gaffes was the result of the Democratic party diligently publicizing everything awful it had on her, from her calling for an end to Social Security to her claim that forcing rape victims to give birth is simply a case of making lemonade out of lemons.

Without this level of investment in year-round research, campaigns often have to start from scratch every election cycle. In Nevada, having dedicated state staff meant that files could be built and maintained from election cycle to election cycle. It also meant having the resources to track Republicans in the early phases of their careers, collecting every gaffe or radical statement — to be brought out if these politicians made a bid for higher office.

The Nevada Democratic party, under Reid's leadership, was well-funded and organized, but that is far from the only advantage the Democrats had in Nevada's 2016 election. The party also benefitted from the support of a thriving labor movement, which persists in Nevada even as unions in other states are taking a beating.

"The Culinary Union is a rank and file union. We’re really militant and disciplined," explained Bethany Khan, the spokeswoman for the Culinary Workers Union, which has been organizing people in the restaurant and service industries for 80 years.

“We had 300 workers who, in two months, took a leave of absence from their hotel or casino jobs and knocked on 350,000 doors and talked to over 75,000 voters and delivered 54,000 early votes," Khan rattled off. "We had 60 percent of our membership registered and ready to vote.”

In the aftermath of Clinton's loss, media chatter about the white working class surged and how its shift toward the Republican Party hurt Clinton's chances in states like Wisconsin and Pennsylvania. Many commentators put the blame on  "identity politics" — that is, political rhetoric focused on racial and gender equality — suggesting that it distracts from the class-based politics required for Democrats to win elections.

But the experiences of the Culinary Union, which is 56 percent Latino and 55 percent female, tell a different story, whereby "identity politics" is married to a class-conscious worker movement, and fighting racism and sexism is seen as a necessary part of protecting the interests of the working class.

"Workers have a lot of intersectional identities, whether you’re LGBT and a worker or a woman of color and working in the industry, all of those identities," Khan said.

“There’s an incredible amount of solidarity," she noted, adding that union members have thrown their support to Black Lives Matters and have marched in gay pride parades.

The Culinary Union's work on behalf of its laborers reflects this understanding that fighting racism and sexism are central to the fight for workers' rights. The Culinary Union, Khan explained, joined the fight for desegregation during the civil rights era. They fight for women's equal pay to this day. And as a majority female organization, she noted, it is helping funnel women into leadership positions in the labor movement.

“It’s really very awesome: working women basically leading the fight, picketing in the streets with their kids on their hips or in the strollers," Khan noted.

This inclusiveness strengthens union power, by making it clear that members do not have to leave their concerns about racism and sexism behind when they are organizing as workers. It also helps keep the labor movement from seeming outdated. This isn't old-school union organizing, with a bunch of white guys munching cigars. The future of labor is female and racially diverse.

So what can Democrats in other states learn from Nevada's example besides "clone Harry Reid?"

On a local level, the biggest lesson is the Democratic Party needs leaders who aren't afraid to dive in and take action.

Reid's greatest strength is also what often angered people the most about him. His made a personal investment and took interest in what was going on in his party at every level. While this often made people feel meddled with, it also helped build trust and understanding. There is no substitute for relationship building.

Leaders also need to be willing to spend political capital on organizing the state party. Down-ballot races require more attention, and the Democratic leadership must adopt a philosophy that a rising tide lifts all boats. They can plant seeds in the state legislatures and city councils, and watch the forest grow.

A need to invest in a substantial full-time party infrastructure is another, albeit expensive, takeaway. It's a waste of time and resources to build every campaign from the ground up. The more continuity and resources that exist and that can be passed on from campaign to campaign, the less work any individual candidate has to do. It helps campaigns hit the ground running, for instance, if they have a hefty file on their opponent on Day One.

Democrats also must do everything in their power to support progressive organizations outside the party because it's these organizations that help keep people motivated and active and ready to do important work like registering voters, educating the public and even getting people to the polls.

Protecting unions from Republican attacks needs to be the first priority, every time. But Democrats also need to aggressively protect other community groups that organize progressive voters. Democrats' shunning of the community group Acorn in 2009, after it was subjected to false accusations of sex trafficking, was the exact opposite of what Democratic politicians should be doing. These organizations are integral to Democratic win, and politicians should offer support not abandonment when Republicans attack these groups.

Most important, Democrats need to adopt a certain ruthlessness in their pursuit of power. Without power, change is impossible, after all. So the party must put a priority on electing more Democrats — at every level. Even legislation needs to be considered through the lens of how it helps the party.

Taking a relentless hard-driving approach to politics can discomforting at times, but it works. After all, it's what the Republicans have been doing for decades, which is how they have so much power despite their lack of popular support. The voters are already with the Democrats, and better organizing can help harness that power.