President Trump brought up the protests in a Thursday morning tweet, threatening to cancel funds 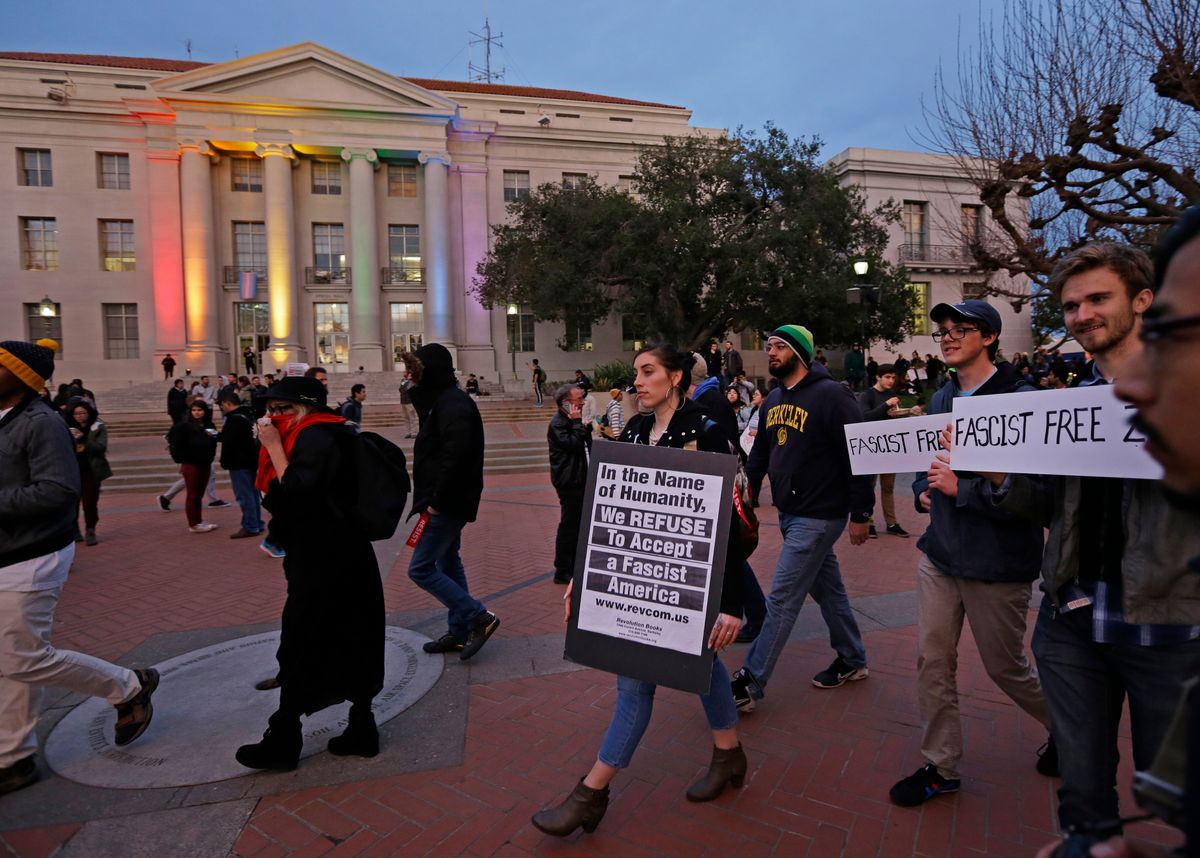 People march in front of Sproul Hall to protest the appearance of Breitbart News editor Milo Yiannopoulos on Wednesday, Feb. 1, 2017, in Berkeley, Calif. The University of California at Berkeley is bracing for major protests Wednesday against Milo Yiannopoulos, a polarizing Breitbart News editor, on the last stop of a tour aimed at defying what he calls an epidemic of political correctness on college campuses. (AP Photo/Ben Margot) (AP)
--

BERKELEY, Calif. — A talk the University of California at Berkeley by Milo Yiannopoulos, a polarizing Breitbart News editor, was canceled Wednesday out of safety concerns after protesters hurled smoke bombs, broke windows and started a bonfire.

The decision was made two hours before the Wednesday night event because a crowd of more than 1,500 had gathered outside the venue, the university said in a statement.

"Of paramount importance this evening was the campus's commitment to ensure the safety and security of those attending the event, the speaker, those who came to engage in lawful protest, as well as members of the public and the Berkeley campus community," it said.

The 32-year-old right-wing provocateur is a vocal supporter of President Donald Trump and a self-proclaimed internet troll whose comments have been criticized as racist, misogynist, anti-Muslim and white supremacist. He was banned from Twitter after leading a harassment campaign against "Ghostbusters" actress Leslie Jones.

His visit to Berkeley is sponsored by the campus Republican club. The university has stressed it did not invite Yiannopoulos and does not endorse his ideas but is committed to free speech and rejected calls to cancel the event.

On Wednesday, the university sent a notice to all students that warned of crowds near the student union, where the 500-seat, sold-out event was scheduled.

"We anticipate there will be major protest/ demonstration activity leading up to and surrounding this event," the letter from school officials said. It did not discourage protests but advised those who didn't wish to participate to avoid the area.

Pieter Sittler, a spokesman for the Berkeley College Republicans, said the club doesn't support everything Yiannopoulos says but "he gives a voice to repressed conservative thought on American college campuses." He uses "levity and humor" that should not be taken literally, Sittler said.

Yiannopoulos' talks have sparked protests, shouting matches and occasional violence at stops around the country. A man was shot and wounded at protests outside his Jan. 21 talk at the University of Washington.

Rowdy protests at UC Davis Jan. 13 prompted campus Republicans to cancel his appearance at the last minute. His final stop was supposed to be UCLA on Thursday but the invitation was rescinded, making Berkeley his grand finale.

UPDATE: Tuesday, 8:40 a.m.: President Trump weighed in on the protests, threatening to cut off federal funds to the school because of the protests.

If U.C. Berkeley does not allow free speech and practices violence on innocent people with a different point of view - NO FEDERAL FUNDS?