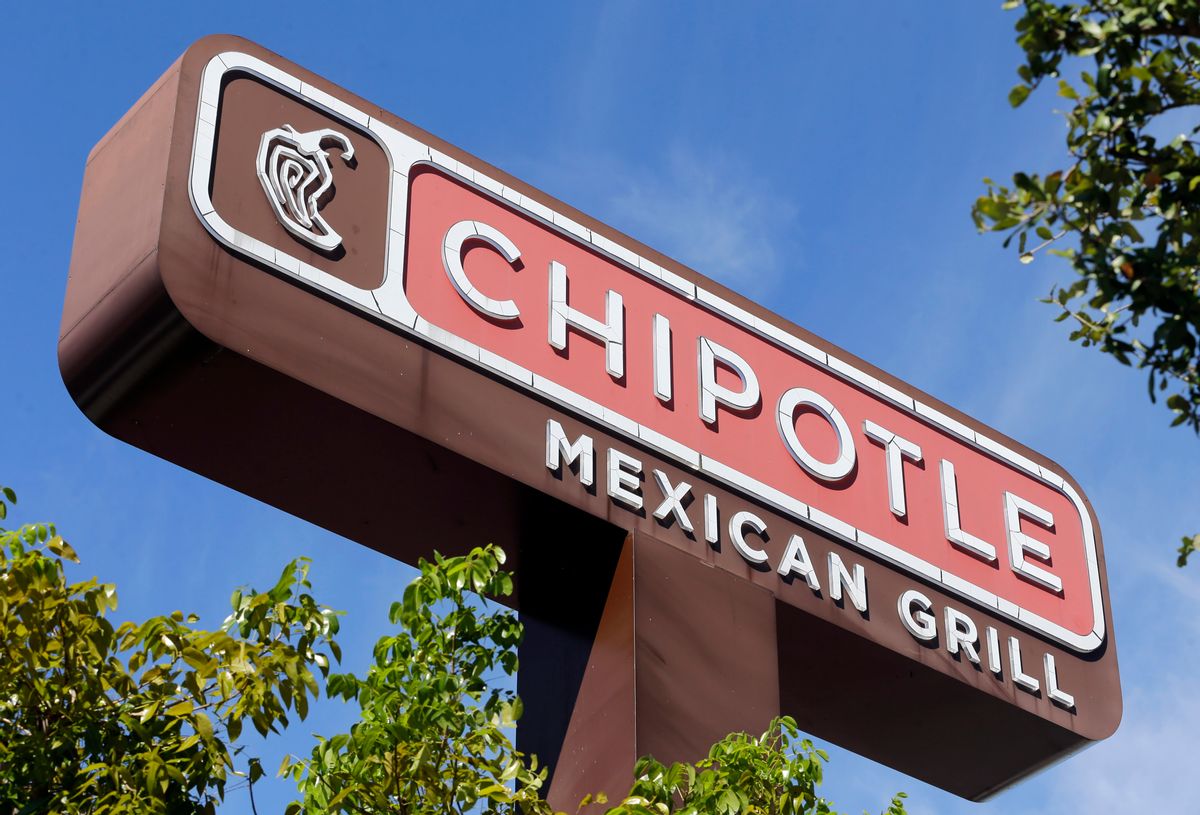 This Monday, Feb. 8, 2016, photo, shows the sign of a Chipotle restaurant in Hialeah, Fla. Chipotle is using free burrito offers to combat the eerie look of empty stores and convince people its safe to return. The offers come as Chipotle fights to recover from a series of food scares, with sales down 26 percent in February. () (AP Photo/Alan Diaz)
--

If you haven’t noticed, there’s been a lot of press coverage in recent days about guacamole, and it’s not just because of the many Super Bowl parties that will be taking place across the nation this weekend. With President Donald Trump threatening to slap a 20 percent tariff on all Mexican imports to pay for a wall along the U.S.-Mexico border, the avocado has come to represent what would happen if the U.S. taxed hundreds of billions of dollars’ worth of Mexican goods that U.S. consumers purchase every year.

For Chipotle Mexican Grill, Trump’s threat to jack up prices on Mexican fruits and vegetables is no joke. Any increase in the cost of its primary raw ingredients would do measurable harm to the Denver-based Tex-Mex chain just as it’s digging out from a crippling string of E coli and norovirus outbreaks that occurred at Chipotles in numerous states in the latter half of 2015.

The company sources as much as 90 percent of its avocados from Mexican suppliers, according to Mark Kalinowski, a food industry analyst for brokerage house Instinet. This supply chain shows just how much U.S. and Mexican businesses are intertwined.

“Should a 20 percent tariff be enacted for goods imported from Mexico, Chipotle likely would bear the biggest brunt of this potential impact on food costs compared to the other companies we cover,” Kalinowski wrote in a note to investors on Tuesday.

Nobody really knows if Trump will follow through with his threat or even if he has the authority to do so.

Meanwhile, Chipotle has other more pressing issues to focus on. On Thursday, the company disclosed grim fourth-quarter and full year-results for 2016. The company earned just $22.9 million in profit from $3.9 billion in revenue, down from $475.6 million in profit from $4.5 billion in revenue. The big drop in profit came last year as the company invested heavily in rebuilding its reputation, including staging lots of food giveaways to lure customers to its burrito bowls and soft corn tacos, while expanding its digital ordering operations.

Chipotle also reported a nearly 5 percent drop in same-store sales in the last three months of the year compared with the same period in 2015. Same-store sales is an important retail metric that excludes recently opened outlets so as to provide a more accurate comparison to past sales performance.

On a brighter note for Chipotle, the company's sales decline was much smaller than the approximately 25 percent drop it had for the first nine months of 2016, as compared with same period in 2015. In December the company had a nearly 15 percent increase, suggesting the worst is over for the once rising star of fast-casual dining.

“I feel like we’re at least holding our own and perhaps seeing an inflection point,” John R. Hartung, the company’s chief financial officer, said on Thursday during a quarterly conference call with investors.

Chipotle’s Chairman and CEO Steve Ells said he has higher expectations for 2017 following numerous changes, including the replacement in December of four board members at the behest of hedge funder and activist investor Bill Ackman. Akman’s Pershing Square Capital Management bought a 10 percent stake in the company in September. One of the new board members is Matthew Paull, a former chief financial officer of McDonald’s, which helped finance Chipotle's expansion from a tiny Colorado chain into a 500-store company.

Since its food-borne illness outbreaks, Chiptole’s stock price has lost more than 40 percent of its value from an all-time high of $749 in August 2015, but Ackman has insisted the board shakeup along with the measures implemented in the wake of the food safety crisis will bring Chipotle back to its pre-crisis position in the industry.

Next week, the company will finish rolling out its new online ordering system to all of its roughly 2,000 outlets and in April it will begin a new national marketing campaign. Ells claimed that new employee training and performance reviews has cut customer wait times by half, and he emphasized that operations at the stores are far more streamlined, with separate food assembly lines for digital ordering and pickup.

“We have the potential to dramatically increase digital orders" in 2017 , Ells said during the call.

To hear company management put it, this could be a turnaround year for the company. If Trump forces guacamole prices higher by the Super Bowl of  2018, Chipotle could well be in a better position by then to absorb whatever trade disruptions the president has in store for corporate America.