“Do you think I’m being unfair to you?”: When the halftime whistle blows at Super Bowl 51 Bill O'Reilly will grill a new POTUS. Or will he?

O’Reilly, more than anyone at Fox News, takes the "fair and balanced" slogan to heart, so bring your A-game, Bill 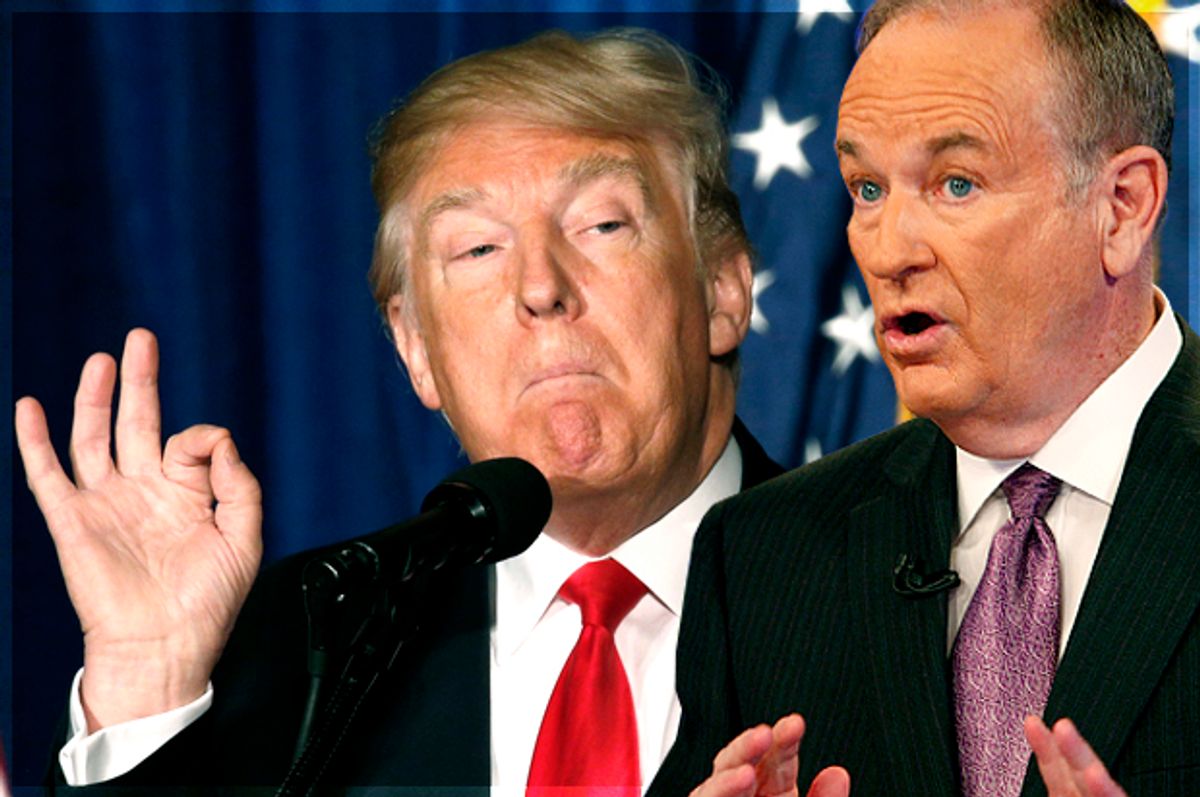 Bill O’Reilly fancies himself a man of principle. This much should be clear to anyone, liberal or conservative, who has seen more than a flicker of him on television throughout the last 20 years.

O’Reilly, whose show has aired in the 8:00 p.m. time slot on Fox News since the mid-’90s, is the personality onto whom the network most projects its “Fair and Balanced” slogan; and O’Reilly, more than anyone at the network apart from maybe Chris Wallace, seems to take that slogan to heart. He aims to be the personification of the network’s highest ideal: a tough, John Wayne-like figure of great confidence who isn’t afraid to tell it like it is, to anyone.

For evidence of O’Reilly’s obsession with being seen as a man of principle, look no further than the interview he conducted with Barack Obama for the Super Bowl in 2014. O’Reilly grilled Obama. He repeatedly interrupted the former president, taking up 35 percent of the conversation. And he asked leading questions like, “Was it the biggest mistake of your presidency to tell the nation over and over, if you like your insurance, you can keep your insurance?” and "Mr. President, why do you feel it's necessary to fundamentally transform the nation that has afforded you so much opportunity and success?" and “Seventy-two percent of babies in African-American community are born out of wedlock. . . . Why isn’t there a campaign by you and the first lady to address that problem very explicitly?” But the way he ended the interview was telling: He asked Obama, “Do you think I’m being unfair to you?”

“Do you think I’m being unfair to you?” is a common refrain from O’Reilly at the end of an interview with a politician. It’s a question he asks Donald Trump often when Trump is a guest on “The O’Reilly Factor.” In the 2014 Super Bowl interview, when Obama answered by chuckling and saying “Absolutely,” O’Reilly pushed Obama to tell him how he was being unfair; and he defended his questioning by saying “Ask President Clinton. Ask President Bush. I gave President Bush a real hard time.”

Of course, it’s not unreasonable for a journalist to ask a president who they think is doing an especially bad job especially tough questions. It would be tone-deaf to interrogate Ronald Reagan fresh off his 1980 election victory the same way as Richard Nixon fresh off the Watergate revelations.

O’Reilly got a lot of flak for treating Obama disrespectfully in that Super Bowl interview, but regardless of whether he did, the function he was performing was essential. Journalists from varying viewpoints need to be able to hold the given president accountable. Obama realized that and brushed O’Reilly’s prodding off with, “If you want to be president of the United States, then you know that you’re going to be subject to criticism.”

This Sunday, O’Reilly will interview President Trump ahead of the Super Bowl, in what will likely be the most viewed interview with Trump since his being sworn in as president. The interview will position O’Reilly as the conduit to a mainstream audience, meaning his responsibility will be different than if he were merely interviewing Trump in a segment on “The O’Reilly Factor.”

Though Trump is only a couple weeks into his presidency and though the Super Bowl is an ostensibly casual occasion for an interview, a number of factors make this a critical interview. Trump lost the popular vote. He has the lowest approval rating (43 percent) that any president has had in February of his first year. And upon being sworn in, he has acted swiftly and strongly — drawing bipartisan criticism of his careless handling of the “not a Muslim ban,” his phone calls with world allies, and his cabinet nominations. There is a lot that Trump needs to answer for.

If O’Reilly wants to achieve the former, he needs to change his announced game plan. Before Trump was sworn in, O’Reilly teased the interview by saying he planned “to ask President Trump a number of policy questions, but also — and this is interesting to me — how he is processing his amazing achievement: a man with no political experience winning the most powerful office in the world. Is he reflective at all?”

That is no longer enough. O’Reilly need not make Trump answer for the many fears he has instilled in liberals. He does not need to ask about the environment, about his tax plan, or about the appointment of Judge Neil Gorsuch to the Supreme Court. But as a conservative voice who cannot be mistaken for an elitist member of the mainstream media, O’Reilly has a responsibility  to represent the millions of Americans who have fears that are not ideological but fundamental and to stick up for the rest of the press.

Sunday’s interview will be an opportunity for O’Reilly not only to prove to the world that he is indeed a man of principle, it is an opportunity for O’Reilly to be John Wayne, because the media, and the country, needs him. America needs the face of media conservatism to confront Trump with the implications of targeting the Other and shutting out journalists who challenge Trump. Failing to do so would not only be unfair to Obama, but to the American people.