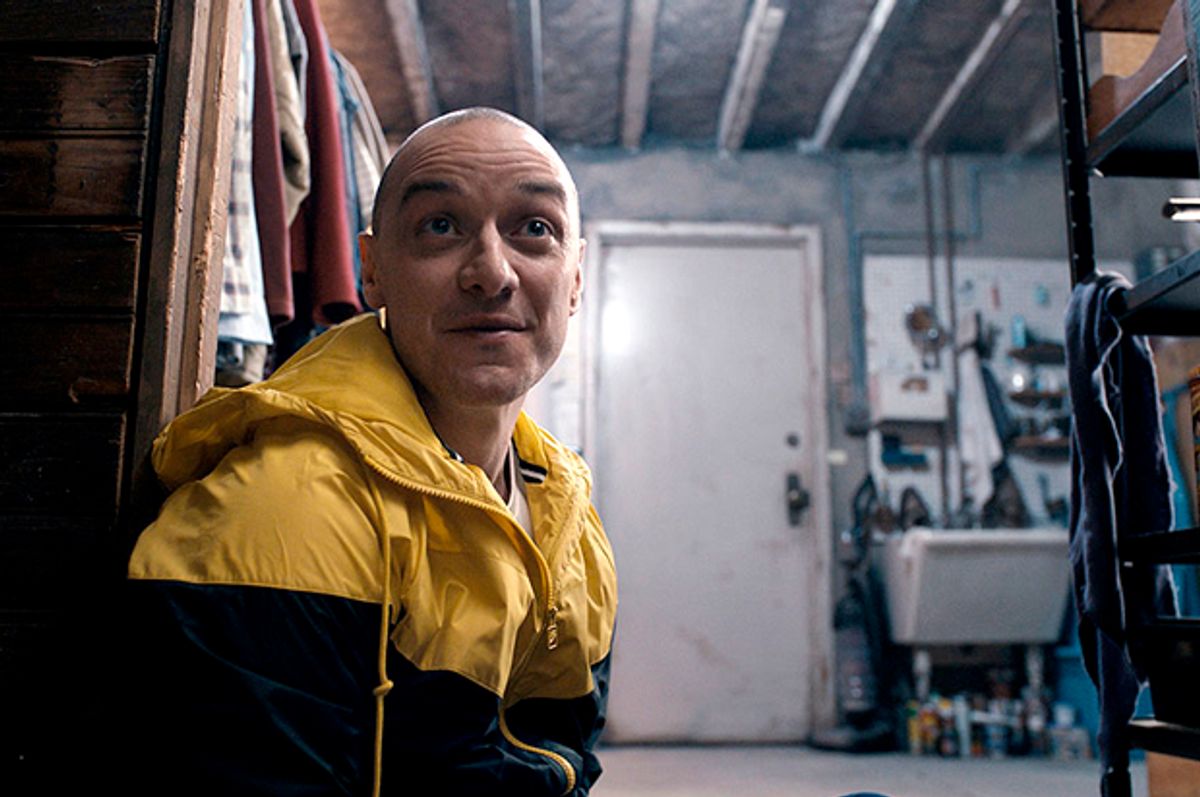 After I wrote my analysis of "Split's" problematic depiction of mental illness last week, I decided to interview various mental health experts and social advocates to get their views on how our pop culture handles this sensitive subject. While none of the people I talked to had seen "Split" (in stark contrast to the film's current box office dominance), our conversations offered some interesting insights.

"I assume the term 'psychologically atypical' pertains to sane, nonviolent people who nevertheless have some mental condition that affects their interactions with the world," said David Matthews, star of the romantic documentary "Aspie Seeks Love" (about which I co-authored this review with Liskula Cohen in 2015). "As an Aspergerian, I've noticed that the media generally depict us either as cutesy, laughable, asexual nerds, as in 'The Big Bang Theory;' or as sociopathic killers, as in Ben Affleck in 'The Accountant.'"

When I asked Matthews about "Split," he expressed an opinion that I heard from many other people I approached about the movie's subject matter. "I haven't seen 'Split,' nor do I have much interest in doing so; an entire movie about kidnapping, imprisoning, and sexually abusing teenage girls does not appeal to me and can only worsen the image of mentally ill people," Matthews told me. "I wouldn't mind movies that featured psychologically atypical villains if movies showed the psychologically atypical in a larger variety of roles, not just as criminal loonies."

Matthews' assessment about how our culture discusses mental illness was echoed by Professor Graham C. L. Davey, emeritus professor of psychology at the University of Sussex. "In the media generally the most common depictions are that people with a diagnosis of schizophrenia are violent, and that anyone who seeks mental health help is either ‘bonkers’ or ‘crazy’ (to cite one particular newspaper)," Davey explained to me, pointing out that this these disparaging characterizations have serious real-world consequences.

Dr. David Spiegel, a professor of psychiatry and behavioral sciences at the Stanford University School of Medicine, expressed similar concerns about negative pop culture depictions of mental illness. "They create irrational fear of the mentally ill, a kind of ‘profiling’ that leads people to expect that the mentally ill are likely to be violent and dangerous," Spiegel said. "Also, I know of patients in therapy who are already telling their therapists not to use the word “aspect” (used in the movie) to describe their dissociation, because they feel accused of harboring murderous psychopathic elements of themselves. The movie creates a spurious association between dissociation and mayhem that affects people without and those with the disorder."

On the other hand, there is also the risk that pop culture purveyors could go to the other extreme and wind up depicting mental illness in too positive a light. When I told John Donvan, co-author with Caren Zucker of "In a Different Key: The Story of Autism," about how "Split" argues that certain mental illnesses are actually just a step forward in evolution, he pointed out that "we want to be careful about signing onto an idea just because it's a crowd pleaser. We wonder, too, if evolution would really favor conditions whose salient features may be deficits in social connectivity, since evolution is so closely linked with reproduction, and reproduction depends on people connecting (hooking up). Also, we want to guard against romanticizing some of the real challenges faced by people who have these diagnoses, or trivializing their situations and predicaments, by packaging them as leaps forward. In the case of autism, for example (which is not a mental illness) we would wager that it has always been with us."

Davey was outright dismissive of "Split's" argument about psychological atypicality and evolution. "That would be very, very hard to believe!" Davey said. "Basic emotions such as anxiety and depression can be adaptive (which is why we still experience them), but when they become diagnosable mental health problems they’ve overshot the mark and negatively affect all forms of daily functioning (educational, employment, social and family) — so it’s very hard to believe that this represents a future positive stage of human development."

Spiegel seemed to sum up the consensus view perfectly: "Sounds to me like a rationalization for impairment. Mental illness brings distress and dysfunction, not advancement."

As I said in my previous article about "Split," I don't think the movie's problematic elements should dissuade fans of horror and suspense films from seeing it. James McAvoy's performance is creepy and effective, M. Night Shyamalan's direction manages to be both fast-paced and haunting, and the surprise twist at the end rivals that from Shyamalan's best-known film, "The Sixth Sense." At the same time, while it is important to recognize the movie's artistic value, that doesn't mean we should overlook its problematic social aspects.

While "Split" doesn't claim to be a documentary, it presents its characterizations of mental illness in serious tones, and as such it stands to reason that at least some audience members will take them seriously. It certainly doesn't help that our culture has long depicted people with psychological illnesses as being dangerous (hence the common argument that we should prohibit people with mental health issues from owning firearms). This doesn't mean that I think the problematic qualities of this film, or even Shyalaman's longer unfortunate history of mischaracterizing psychological atypicality, should be held against him as a human being. Everyone deserves empathy, including people with power (in Shyamalan's case cultural power) who perpetuate oppressive attitudes.

At the same time, we owe it to the more vulnerable among us to be sensitive to their concerns. A movie like "Split" certainly isn't as harmful to people with mental illnesses as, say, repealing Obamacare will be, but that doesn't mean we should ignore how it will further stigmatize them on the grounds that it's "just a movie." After all, America has elected one film star president and one reality TV star president in a span of less than 40 years, so obviously fiction can have a very real impact on the real world. "Split," by virtue of being the No. 1 movie in America for two weeks in a row, has a great deal of cultural power.