Bigger than fake news: Trump's rise was fueled by a deeper narrative of fake history

Trump's lies about crime, Muslims and immigration aren't meant to make sense — only to confirm his followers' fears 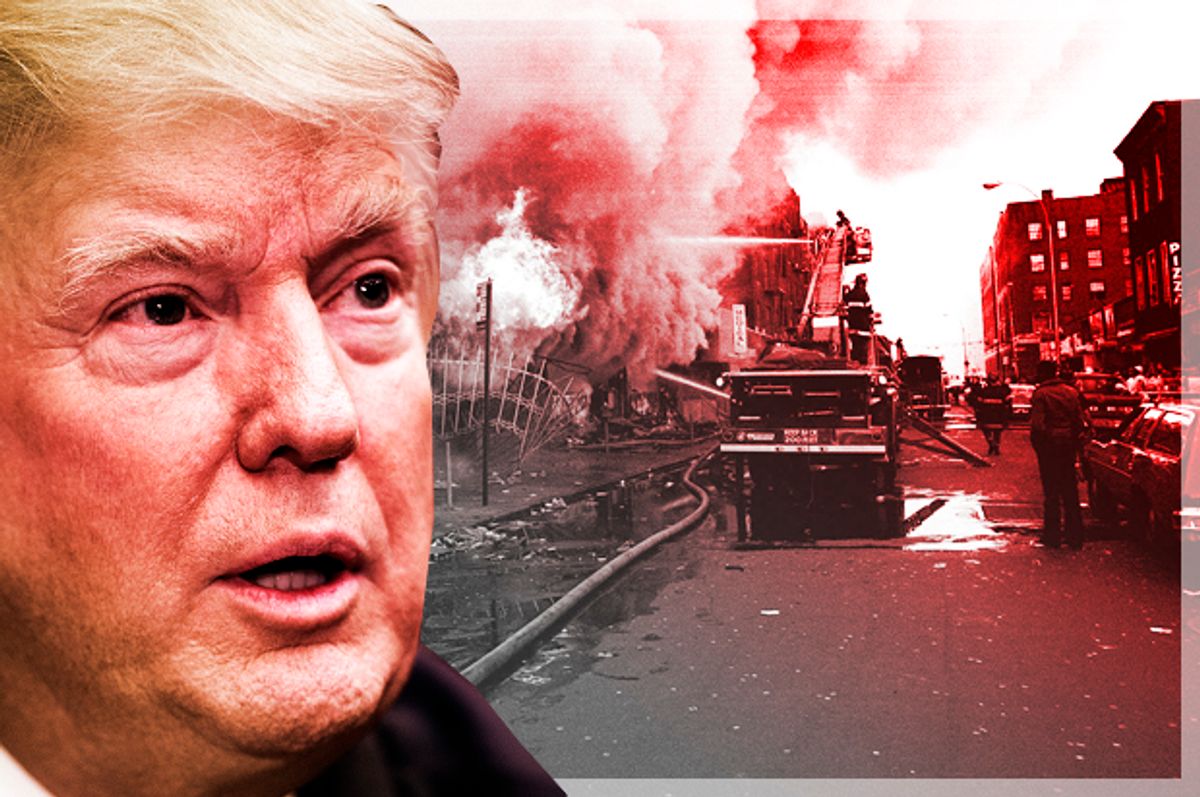 A lot of ink and a lot of electrons have been spilled on the subject of "fake news" during the last election cycle. But too little attention has been paid to something deeper that plays a crucial role in Donald Trump's worldview: fake history. Although vague in its outlines, and more often alluded to than directly mentioned, that fake history is central to Trump’s worldview, his sense of self and the ways he connects with his audience.

Fake history showed up early when Trump first announced his campaign, blaming Mexico for “sending people that have lots of problems, and they’re bringing those problems with us. They’re bringing drugs. They’re bringing crime. They’re rapists.” The clear implication was that crime and illegal immigration were both growing problems, that they’re interrelated, and that politicians had dishonestly minimized them out of active malice toward “real Americans.”

All of that was total BS. Both crime rates and unauthorized immigration are down significantly from their historic high points. Violent crime rates peaked in 1991, and have fallen by roughly half since then. Net "illegal" immigration has fallen to roughly zero, if not less than zero, since the Great Recession began. (In other words, roughly the same number of undocumented immigrants have left the country as have entered.) Trump’s whole rationale turns to dust if the actual history is acknowledged. Logically, at least, there’s no there there.

While Trump lied in many different ways about many different things throughout his campaign, fake history provided the surrounding mythological framework that made his other lies work. It justified them, made them sound plausible and formed the foundation for other lies he built on top of them — especially the notion that he was a unique truth-teller on the side of “real Americans” and that anyone who said anything different was out to get them, especially anyone who challenged Donald Trump.

For good reason, Trump never tried to refute the actual historical record, choosing distraction and misdirection instead. First he made the baseless claim that “You have hundreds of thousands of people [i.e., undocumented immigrants] going to state and federal penitentiaries. That just came out in a Homeland Security report." (No such report existed.) Then he took advantage of a single tragic but essentially random murder — which statistically proved nothing — to justify his entire fake-history-based argument. Put that together with his constant distraction strategy, faithfully supported by the media, and he got away with it.

By the time the subject came up again, Trump’s fake-history claims had simply become part of the assumed framework of campaign coverage. Anyone who didn’t share Trump’s fake-history sense of panic would then be attacked as “weak” on immigration. Believing fake history made Trump “strong”! And it could make others “strong,” too!

Once that initial false narrative was established, the way was opened for other, similar fake histories to be spun; for example, historically unfounded fears of Muslim refugees. Those in turn allowed for more attacks on others as “weak” if they dared to disagree with Trump’s fake history. This was seen more recently with Trump's "Muslim ban," aimed at seven nations which are collectively responsible for zero deaths of American citizens inside the United States since 1975, according to the Cato Institute — another example of how fake history stands real history on its head. All this dovetailed with another fantastical strain of fake history Trump promoted during the campaign, the absurd claim that Hillary Clinton and Barack Obama were “founders” of ISIS.

To fully grasp the power of fake history, a brief detour is in order. As Nausicaa Renner recently pointed out, the notion of fake news, focused on stories, neglects the more widely circulated influence of images with just a few keywords, like this anti-Clinton Facebook post from Breitbart that was shared more than 200,000 times.

As Renner argues, the volume of links suggests that viral memes like that one had much more impact than Breitbart's actual articles did. There’s a flip side to this realization: Memes appeal to people because they fit into the way people already understand the world. That's precisely where fake history comes in. It fleshes out a framework for hyped-up fears, giving them the appearance of fitting together into a coherent, well-founded whole.

In "The Battle for God," Karen Armstrong highlighted an ancient distinction between two different ways of understanding the world: Logos is concerned with the practical understanding of how things work in the world, while mythos is concerned with ultimate meaning. “Unless we find some significance in our lives, we mortal men and women fall very easily into despair,” she noted. “The mythos of a society provided people with a context that made sense of their day-to-day lives; it directed their attention to the eternal and the universal. It was also rooted in what we would call the unconscious mind.”

The power of memes is clearly related to how well they fit into a mythos. For decades, conservatives have nourished a mythos that sustains them, one in which liberal betrayal plays a central role, and where conservatives alone are the “real Americans,” the most exceptional people on earth. (Their mythos has always had a strong ethnocentric core, which they’ve drawn on to achieve other policy ends. Trump won by doubling down on that core.) Liberals, meanwhile, have been much more engaged in logos, in the actual how and why things work in the world. Trump’s campaign intensified this polarization, identifying all educated elites as the liberal establishment that had betrayed “real Americans.”

This was only to be expected, given Trump’s background. Reality TV is nothing if not a playground of mythos. It has nothing to do with logos at all. Confounding logos is its bread and butter. Logos would make it predictable, not “real.” It would be ratings death. Such is the logic of Trump’s approach to mythos: The less sense it makes, the better. Don’t engage in substantive debates over facts, just grab hold of whatever image, meme, tweet, rumor or pure invention comes to hand to redirect attention away from anything that would challenge one's control of the narrative.

Trump summed up his mythos succinctly in his inaugural address when he said, “This American carnage stops right here and stops right now,” as if everything in America had gone to hell in a hand-basket, and he would instantaneously set it all to rights. There were factual problems galore surrounding that speech, as pointed out by factcheck.org:

As usual with the fact-checking community, the factual account offered to counter Trump was accurate, from a logos-based perspective, but largely missed the point, as far as mythos goes. Trump is a salesman, and he’s selling a story: a story of American decline that he alone can fix. If you want to know why he retweets Mussolini quotes using the #MakeAmericaGreatAgain hashtag, that’s it in a nutshell.

Of course, America is in decline in some ways — including ones Trump never mentions — while America’s elites continue doing well, that’s been strikingly obvious since the 2008 financial crash, and was the motive force behind Occupy Wall Street and the Bernie Sanders campaign. The fact-checker’s response, though accurate in its specifics, fails to take account of that larger general truth. But the even bigger general truth is that Trump’s “I alone can fix it” claim is just one more symptom of that decline. Ultimately, that’s the biggest lie of all at the core of Trump’s fake history. Mussolini couldn’t fix Italy, no matter how much puffed and preened. And Trump is just a cheap Mussolini wannabe.

Take manufacturing job loss, for example. For those on the ground, there’s no doubt it’s a staggering problem. Not just whole communities but whole regions have been devastated, and international trade certainly plays a role in that. Yet America is not alone in this. “Pretty much every economy around the world has a low or declining share of manufacturing jobs,” Charles Kenny noted back in April 2014:

Even India and China aren’t immune:

If manufacturing job loss is a worldwide problem, it makes no sense to blame incompetent or evil elites for all our problems. Such people may make things worse, but getting rid of them wouldn’t begin to solve the underlying problems. Painting them all with the same broad brush — intensifying animosity at the expense of thought — will only make problem-solving harder.

But Trump is about finger-pointing, not problem-solving, which is why fear-mongering around immigrants, crime, Muslims and terrorism have played such a central role in his campaign and his brief presidency. The more visceral the feeling of threat involved, the easier it is to switch from problem-solving to finger-pointing, demonization and worse — a dynamic that has repeatedly led democracies toward authoritarian rule.

There is also a more more broadly shared form of Republican fake history that has meshed with Trump’s in many ways. On the policy side, this includes all the old GOP shibboleths — trickle-down economics, tax cuts for the rich, etc. — which might have seemed plausible to some 36 years ago, when Ronald Reagan pushed them as something fresh and new. But the favorite GOP myth that Reagan singlehandedly revived America’s economy is pure fake history.

Deficit spending was the key to the Reagan boom, and his administration reversed a 30-plus-year trend of reducing government debt as a percent of GDP. Sure, the 1 percent did great as a result, but deindustrialization took off and labor unions were decimated. The middle class was left behind, and has never recovered. Tapping into the carnage that Reagan wrought is the very foundation of Trump’s political success. From a logos-based perspective, Trump’s populist campaign should have nothing in common with any of this — but in Trump’s logos-free reshaping of the Republican Party, they fit together hand in glove.

In contrast, on the political side, new fake history replaces old at a breakneck speed. Last year, Republicans claimed it was unprecedented for Obama to appoint a Supreme Court justice in an election year — ignoring six 20th-century examples, including the appointment of current justice Anthony Kennedy, as well as Louis Brandeis and Benjamin Cardozo. Now fake history says that Democratic opposition to Republicans stealing a Supreme Court seat is an unprecedented attack on bipartisan historical norms.

Similarly, last year, fake history held that Obama’s use of executive orders was tyrannical, despite the fact that he used them more sparingly than any president since Grover Cleveland. Now that Trump is signing executive orders that have career State Department and Justice Department officials sounding the alarm, the new fake history simply erases everything congressional Republicans said before November.

We haven’t even mentioned Trump’s promotion of birtherism, which combines different elements of conspiracy-theory fake histories that have circulated in America since the days of the Alien and Sedition Acts in the 1790s. But one thing is certain: As Trump’s presidency continues, it will be increasingly important to understand how his false narratives fit together and feed off of one another. Focusing on the larger pattern may be the only way to deal with the flood of everyday lies, fake news and false memes that’s bound to confront us for the next four years.