Kleptomania and a mother's love: The five-finger discount is my personal rebellion against inequality

The first thing I shoplifted was an avocado, when I couldn't afford to feed my toddler the most nutritious food 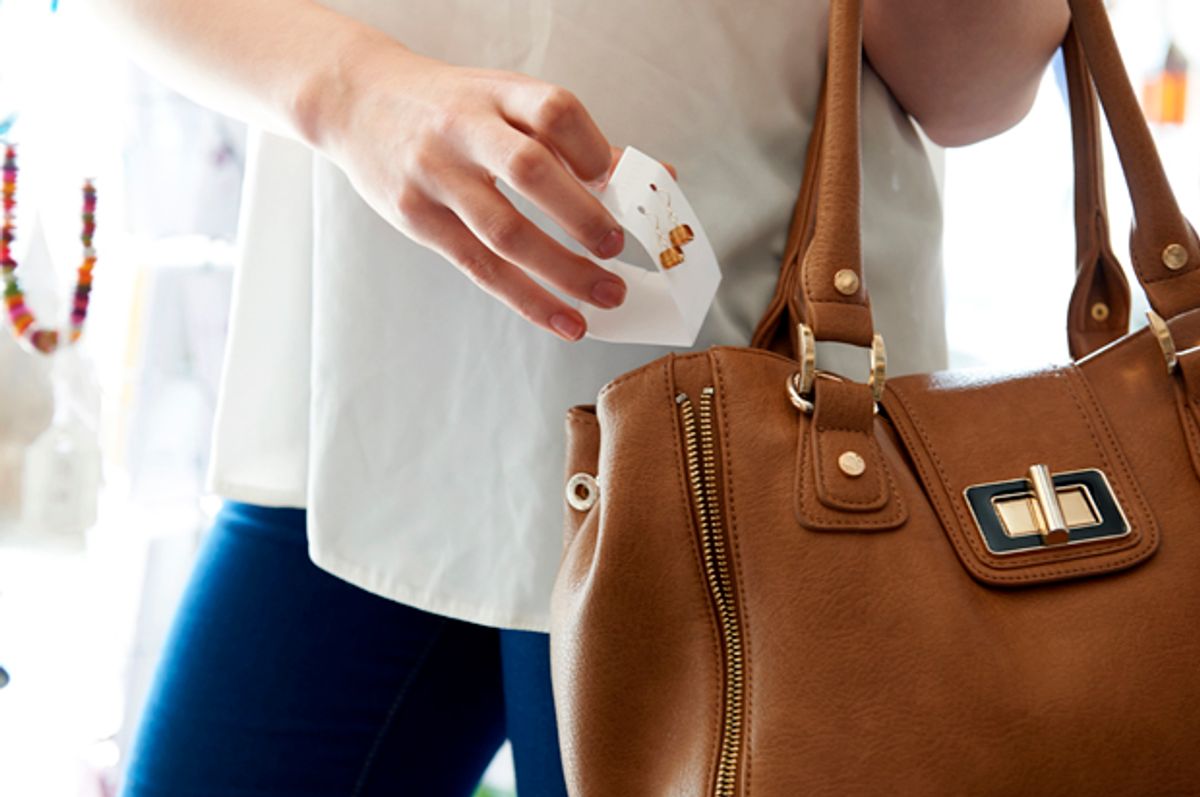 The first time, I am with my husband. We take our 1-year-old daughter to the supermarket, as we so often do, in the expensive City Mini Jogger stroller we were gifted before her birth. I hide a dark, ripe avocado in the black mesh basket underneath her seat. As I load the rest of our items onto the conveyor belt, I’m aware how effortlessly the avocado blends into the stroller, almost as if it’s no longer there. We check out and pay for the rest of our items. The cashier doesn’t notice, and neither does my husband. We save $2.50.

We have just moved back to California after four years of bitter-cold, endless New York winters. Having lived in Los Angeles previously, we spoke often of moving back to soft and free-flowing California avocados, only to discover upon returning that in the Bay Area avocados are two for $5. We are both out-of-work writers looking for new teaching positions, and the meager amount of money we saved for the move is running out.

I have always worried about what went into my daughter’s body. Before my pregnancy, this kind of control was something I exercised on myself. I obsessed over every ingredient in my food, over preservatives and packaging, over the dark mystery of restaurant meals. When I was pregnant, I felt validated, and consumer culture emboldened me. Everyone wants pregnant mothers to eat well.

After I gave birth, and once the project of breastfeeding normalized, I shifted the obsessive disorder onto my daughter, and it became part of my parenting philosophy. My daughter never ate anything conventionally produced if it was on the “dirty dozen,” and she consumed coconut oil, grass-fed butter and healthy brain-boosting fats with every meal — avocados were an important component of her diet. She ate as though we had the money to eat this way. My husband and I made sacrifices with our own meals. I often yelled at him for overeating; we needed the extra money for her, and had no fiscal room for indulgences.

Because of the low cost of living in upstate New York, we had the privilege of feeling somewhat comfortable in these draining financial decisions, even though we were both struggling graduate students. When the financial pressure of the cross-country move caught up to us, I had to slowly eliminate important components of my daughter’s balanced meals, and the mother guilt was heavy. The avocado was my revenge on consumerism, on the structure of money at large, on a world that places a hierarchy on health. My small triumph over the machine of access.

And so I continued taking my daughter to the store in her stroller. Eventually I shared my plans with my husband, and though he refused to explicitly endorse or participate in my outlaw behavior, his smug smirks as we rolled out of the supermarket assured me that he supported my efforts. We made it a rule that each time we shopped — we always shopped at the same store, so weren’t we just taking a fair reward for our customer loyalty? — we smuggled an avocado out with us.

Though Freud was generally mute on the subject of kleptomania, Wilhelm Stekel, one of his followers, wrote extensively on the subject. As with most of psychoanalytic thought, for Stekel, kleptomania had a sexual root. In his work on the subject Stekel argues that kleptomania is a form of sexual gratification for those women who feel otherwise repressed. Stekel lumps together a woman who steals a doll for her sick child, an “unmarried woman of twenty-six who stole pencils in a shop” because “her father kept her too strictly,” a servant who steals from her mistress and denies the crime, and a rich woman who takes sheets from a bathhouse. From a psychoanalytic perspective, these women’s unique forays in stealing are attempts to seek sexual gratification.

From my perspective, stealing is also an attempt to rewrite or get outside those laws that create a sense of normalcy in society. A society that allows certain children access to the healthiest foods, that underpays and therefore undermines the work of certain people, and that holds competition and economic inequality as givens, rather than culturally constructed ways of life. It comes over me when I think about the endless turnover of paper, the endless struggle we all undergo every day, just to get dinner on the table.

At T.J. Maxx I pay for the board book for my daughter, but I smuggle out a scented candle and a packet of detoxifying facial cleansing wipes. Self-care for the revolution. I prepare a reasonable excuse should anyone point out my unpaid items — always, I plan to use my daughter in my defense. I’ve earned this right. I was in labor for 46 hours. I don’t feel guilt. It’s all true. The distracted nature of motherhood, the never-ending worry, and the constant efforts to ward off an unexpected toddler meltdown. I need these two small objects of peace!

I owe no one here anything, but the world of consumerism owes me my life. And besides, it isn’t stealing if you also buy something.

It reaches its peak when I leave the bulk box of Target diapers in my giant red cart one afternoon, completely aware of what I’m doing. The overworked and underpaid employee doesn’t notice or doesn’t see, or consciously chooses not to care, though I fully expect to be called out before the payment process is through. When the transaction is complete, I feel I am colluding with the Target employee. I save nearly $40.

Target will never notice the difference, and that is the guiding philosophy. When I think about the kind of pain and anxiety purchasing causes me on a daily basis (“will we be able to pay rent if we buy the bulk diapers, which will save us money in the end but might be too expensive to purchase in advance?”), the time wasted on trivial and meaningless financial decision making, which has only increased since becoming a mother, I can’t help but compare it to the ease with which large corporations write off minor losses. It overwhelms me with frustration.

A few months after the move, my husband lands a job at a corporate education company. He makes a decent salary and we begin climbing (very slowly and unsteadily) out of a financial hole, though he’s miserable at the job. I am finishing my PhD dissertation, working toward a degree that no longer promises much in terms of job opportunity and security, and I am working part-time for a relative. Always the workaholic writer, I never intended to be somewhat of a stay-at-home mother, yet I find myself suddenly in charge of procuring all the goods around the house — food, clothing, home goods. Diapers.

Much of the early writing on kleptomania characterizes compulsive stealing as a type of female hysteria. By most definitions, kleptomania is differentiated from simple stealing by this compulsivity — the overwhelming urge to take something not of necessity to one’s life. Psychological imbalance is characterized by the obsession interfering with the subject’s ability to carry out a "normal" life.

When I tell my therapist about aspects of my life I think I should change to be a better mother, wife, or writer (I never talk about the stealing — even giving it this name feels overdetermined! And I’m afraid she’d turn me in!), the first thing she asks me is whether I am bothered by what I am doing. If I am not, she says she isn’t concerned. And this is how much of modern-day client-centered therapy works.

If I’m not concerned about my small debt- and payment-free acquisitions, if I feel they are deeply deserved because of my life of financial struggle, which itself is a result of my commitment to the public service of education and the pursuit of different strains of truth through writing, then is it a crime? If I were to tell you these are little acts of love for my daughter, for myself, would you tell me it’s okay?

Not only does the emphasis on necessity in the generally accepted definition of kleptomania forget to acknowledge the natural variation covered over by any concept of psychological "normalcy," it also forgets the very subjective nature of the notion of necessity. Who, after all, can say what’s necessary in a life?

Years after her 2001 public shaming, Winona Ryder, who attempted to steal more than $5,000 in merchandise from a Saks Fifth Avenue, told People magazine that she had never felt guilt about her attempted stealing because she “hadn’t hurt anyone.” And yet, we do so often meet such incidents with a horror that should be reserved for deeply serious crimes against humanity.

Kleptomania shows us that we too often privilege property over the mental and emotional well-being of women. For his part, Stekel favors reports of women stealing pencils, or a scarf after an incident with a cigar. From this perspective, women’s sexual excitations, rather than the work of love, can be blamed for every transgression of the law a woman carries out.

Like Freud’s Dora, the women in Stekel’s studies are deeply misunderstood. They become like friends to me as I read through their stories, trying to understand my own. I imagine myself speaking with the woman who steals a scarf after her husband has burned her daughter’s hard-won ballgown with his cigar. I talk with her about the men in our life, our frustrations with their carelessness — hers is careless with his cigars, always leaving them burning around the house, mine overeats and doesn’t mind the budget. We talk about the gulf we feel growing between us and them, and the unacknowledged work we do in the home. We talk about what we both see as a logical practice, a glue that holds together our way of life.

We spend the day together, talking as we walk through supermarkets and department stores, pocketing tiny insignificant treasures for ourselves and our family members, giggling to ourselves. In these moments, we’re just a little free.