Notes from a trailing spouse: The hot sauce is great but grocery shopping can feel like a roller derby and Abu Dhabi is no place for a barfly

There are high high-end bars and low high-end bars; both are enough to make a deeply committed social drinker weep 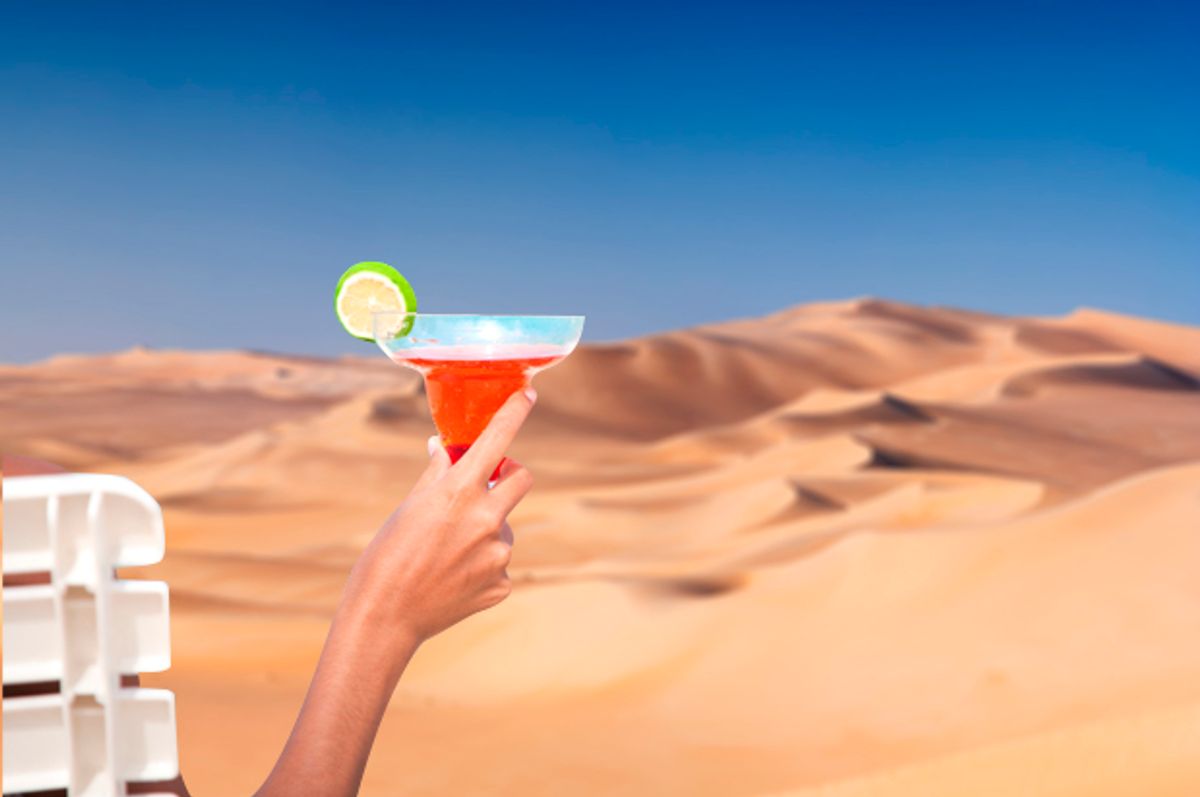 In the weeks before my husband and I were to depart to live in Abu Dhabi I found myself lying awake at night gripped with worry. While most in my position would be fretting about finding a good school for their children, or somewhere to live, I was in a state wondering if I would be able to find a decent jerk sauce. Not to mention beet tops and a place to buy booze that wouldn’t bankrupt me. Turns out, no to all three.

No matter where I am in the world or for how long, the first order of business is to go to a local market and do what I call buy and spy. You’d be amazed what you can learn about a culture by checking out what people have in their shopping baskets. So on our first morning, while still reeling with jet lag and that particular horror of meeting 104-degree heat married with 100 percent humidity, I set out to find my market.

My early expeditions had me rolling up to a couple of the French outfits, Géant and Carrefour. Great for butter and the odd black chicken, but they didn’t have the array of hot sauces that I needed to fill the gaping hole left by not having jerk.

Then I found Lulu’s. Aptly named, it’s a lulu. Hypermarkets, as they are called here, which now that I think of it, must be an anglicized version of  the French word hypermarché. Which brings up another point: Why all the French-owned markets? In every other aspect, Britain has its fingerprints all over this place.

Lulu’s is not for the faint-hearted, especially if you go there on a Friday night after evening prayer. All at once every guest worker, whether they are from Sri Lanka, Pakistan, the Philippines, America, Britain, or Australia, along with large Emirati families with squads of children careening up and down the aisles, descends on the store.

I bypass the clothes, the electronics, and head to, or rather roller-derby my way to the produce section, where, thrillingly, half the stuff is a complete mystery to me. I have been known to accost an innocent Indian or Filipino woman, and once they get over their shock at seeing a tall bottle-blonde holding up a huge phallic gourd excitedly asking, “What can be done with this?!” they are usually very helpful. At least, I think they are. I have noticed I am often given complicated advice involving the words salt, soak, grind, pat, fry.

Still, all is not lost. There are hot sauces from every continent; pickles, too. My current passion is a chili pickle from India. Blisteringly hot, salty, a damn good replacement for my jerk.

I am still stumped at the meat section and haven’t decided yet which is a more flavorful beef, Pakistani, Brazilian, Australian or New Zealand. All good problems.

As opposed to my drinking problem.

Drinking for me is all romance. And I cut my teeth, learned the art, in some of the greatest bars on earth. New York City bars. Fanelli’s, Pete’s Tavern, The Dublin House, Puffy’s, The Old Town. Hitch yourself up, lay down a twenty (ok, now maybe a hundred is needed) and spend the night in happy concord with friends and an endless supply of drinks. Leave a huge tip, and the next time half those drinks will be free. No fuss, no muss. Perfect.

Now, nights out are a near-funereal experience. You can only drink in hotels and so are relegated to two choices: high high-end, or low high-end. True, in the cool months there are some pretty dreamy outdoor watering holes with views of the Persian Gulf, but that’s only three months of the year!

So that leaves me the rest of the time having a pop in rooms that may be fit for a king but not a booze hound. There’s nothing more disconcerting than sitting down in some overly plush chair, leaning back and very nearly going up and over the back of it. And then there’s the mausoleum-like venue, a room all shiny marble (I swear, if the world collapses in on itself it will be because these big Western hotels have sucked out all the marble that was holding it up) only to be silently approached by a soft-spoken, near groveling waiter. My drink is consumed not surrounded by the benchmark sounds of a bar — music, laughter, arguments, flirting — but by the self-important murmurings of the well-heeled patrons who can afford a room in this cathedral. There’s only so much a girl can take.

So I head to the low high-end bars. Big mistake. These, while not so marbly, are doubly depressing. Here big, fat, older men sit and drink with little, sad, younger working girls. I once saw three women come in dressed as Catholic schoolgirls -- or maybe they actually were. Either way, the result was the same. And too easy. After all, above their heads lurks a warren of expense-account-friendly hotel rooms.

I realize I haven’t mentioned sports bars. That’s because I wouldn’t be caught dead in one, so can’t speak with any authority.

As you can imagine, this state of affairs has me drinking at home more often than not. Buying liquor, as the Brits like to say, is jolly good fun. There are designated stores; all tucked away with blacked-out windows. The one we like to go to is accessed through a basement door in the garage of the St. Regis. The cloak-and-dagger feel is amplified by the fact that the garage floor is coated with the squeakiest paint so that when driving any turn of the wheel makes you feel like you’re in one of those squealing car-chase scenes in the movies. Once upstairs it’s all pretty pro forma, that is, until they put your purchase in the thickest, blackest plastic bag I’ve ever seen — body bags have nothing on these suckers — all to ensure that your offending vodka is kept well out of sight. Once home, I have the strangest urge to whisper as I unsheath my bottle, “It’s all right, you’re safe.”

On nights like these, I pour myself a healthy shot, step out onto my balcony, which overlooks the Gulf, and raise my glass in a wistful toast to my fellow drinkers back in New York. Of course, my gesture is somewhat hollow. I’m facing Iran.

MORE FROM Bex B.