Steve Bannon's war with Islam: Trump may not even understand his adviser's apocalyptic vision

Bannon has long yearned for a civilizational conflict between the West and the Muslim world. Now he may get it 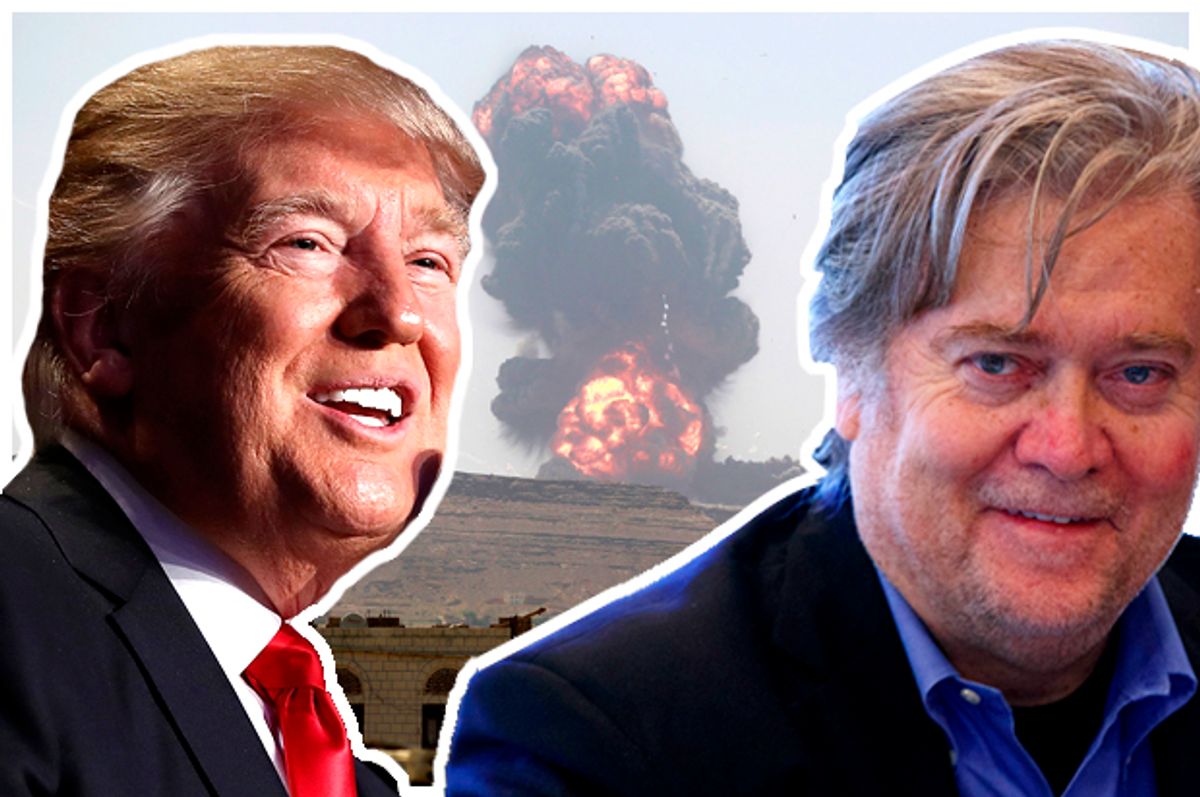 There seems to be considerable urgency right now to enshrine Donald Trump’s Islamophobia into law. Talk of an immigration ban, a Muslim registry and even internment camps once sounded like the machinations of a spray-tanned salesman looking to indulge the electorate’s need for a good villain narrative. Amid an atmosphere of overwhelming chaos, the early days of Trump’s reign have made clear, however, that Islam is Public Enemy No. 1 and serves as the centerpiece of Steve Bannon’s ethno-nationalist agenda. (Trump's ban on immigration and travel from certain Muslim-majority nations is currently on hold, thanks to a Friday federal court order. That does nothing to resolve the larger questions.)

Bannon called Trump “a blunt instrument for us” in an interview last summer with Vanity Fair. He added, “I don’t know whether he really gets it or not.” That the former Breitbart executive editor would have an outsized role in a Trump administration should have been evident long ago. In Trump, Bannon found a petulant Twitterphile and a manipulable tool who has minimal interest in policymaking and little insight into his own limitations. As he sought an upheaval to remake an America rife with perceived threats, Trump was, as Lawrence Douglas wrote, “the proper vehicle to carry the fight forward.”

For Bannon, the fight is against Islam. There are echoes of Samuel Huntington’s 1993 essay in Foreign Affairs called “The Clash of Civilizations?” Huntington wrote of a world that had been divided along “fault lines” such as culture, which could spur conflict between Islamic civilization and the West. Bannon speaks of the current war with “jihadist Islamic fascism” in apocalyptic terms and sees it as the latest iteration, as Uri Friedman wrote, “of an existential, centuries old-struggle between the Judeo-Christian West and the Islamic world.”

Further, Muslim immigration gnaws at Trump’s foremost consigliere. He evinces ignorance in his ideas about sharia, yet uses the term frequently when discussing Muslim immigrants, who “are not people with thousands of years of democracy in their DNA.” Though roughly 100,000 Muslims have entered the United States in each of the last few years, he claimed in December 2015 that 1 million would be entering in each of the next two years.

These statements were a prelude to Trump’s “Muslim ban,” an executive order that was signed shortly after inauguration (and is now on hold, at least for the moment). Its swift enactment was the first sign that Bannon’s war on Islam had begun. He hastily crafted the ban without regard for the Department of Homeland Security -- or for that matter the State, Defense and Justice departments. Soon court orders were being defied and acting attorney general Sally Yates was fired for her refusal to enforce Bannon’s opening salvo. Christian refugees would be given priority over others to enter the country, as an individual’s religious identity is apparently the only indicator of his or her suffering.

Bannon’s temerity was on full display as he sought to engineer the civilizational crisis that he has clearly relished for years. His consolidation of power was complete when Trump took the unprecedented step of offering Bannon -- a man with no experience or background in national security, foreign policy or the military -- a permanent seat on the National Security Council. (Yes, Bannon was once a Navy officer. He left the service in 1983.) Now the man who admires darkness, Satan and Darth Vader will influence major decisions of war and peace.

All this unrestrained jingoism risks causing a conflagration at a time of isolated fires that are being managed and contained adequately. As Robin Wright of the New Yorker noted, the Obama administration "has turned the tide on jihadism over the past two years. The two premier movements -- the Islamic State and Al Qaeda -- are both on the defensive.” In the United States, attacks by Muslims were responsible for only one-third of 1 percent of all murders in 2016.

Even Bernard Lewis, who fathered the phrase “clash of civilizations” when he wrote of the Arab world’s need to expunge Islam from its politics, cautioned against an exaggerated response to the Judeo-Christian world’s ancient rival. “It is crucially important,” he noted, “that we on our side should not be provoked into an equally historic but equally irrational reaction against that rival.”

Through the immigration ban and its associated rhetoric, jihadists and at least seven Muslim-majority countries have been given notice of the Trump administration’s intentions. This is a not a U.S. government that will call Islam a religion of peace, as George W. Bush did. Or one that will be reluctant to use the term “Islamic” to prevent giving groups like ISIS legitimacy, as Barack Obama did.

Yet ISIS is emboldened now because Bannon’s undaunted pursuit of a clash will help its goal to “eliminate the gray zone” of coexistence between Muslims residing in the West and their non-Muslim neighbors. ISIS hopes that Bannon’s stark intentions will make Muslims in the West disillusioned about its acceptance and tolerance, boosting recruitment and sympathy for their deranged cause. As Abu Omar Khorasani, a senior Islamic State commander in Afghanistan, said, “This guy [Trump] is a complete maniac. His utter hate towards Muslims will make our job much easier because we can recruit thousands.”

In addition, as Dan Byman, a staff member of the 9/11 commission, noted, Muslims in the United States may become more disenchanted “and thus easier to recruit or inspire to be lone wolves. In addition, it may make communities feel they are suspect and decrease vital cooperation with law enforcement. The hostile rhetoric that goes with these bans makes all this more likely.”

Muslims both within and without the United States will likely become collateral damage amid the tumult Bannon seeks. The hopes and aspirations of Muslims for years have been scuppered within the mere seconds it took Trump to sign his executive order. In fairness, these are not fires started by President Trump, who seems only to be carrying the torch handed him by an insidious, ingenious adviser who wants to set the world ablaze.