Building the realm of alternative facts: Trump's lies are enabled by years of right-wing media

After decades of Rush Limbaugh, Fox News and Breitbart, conservatives can no longer tell fact from fiction 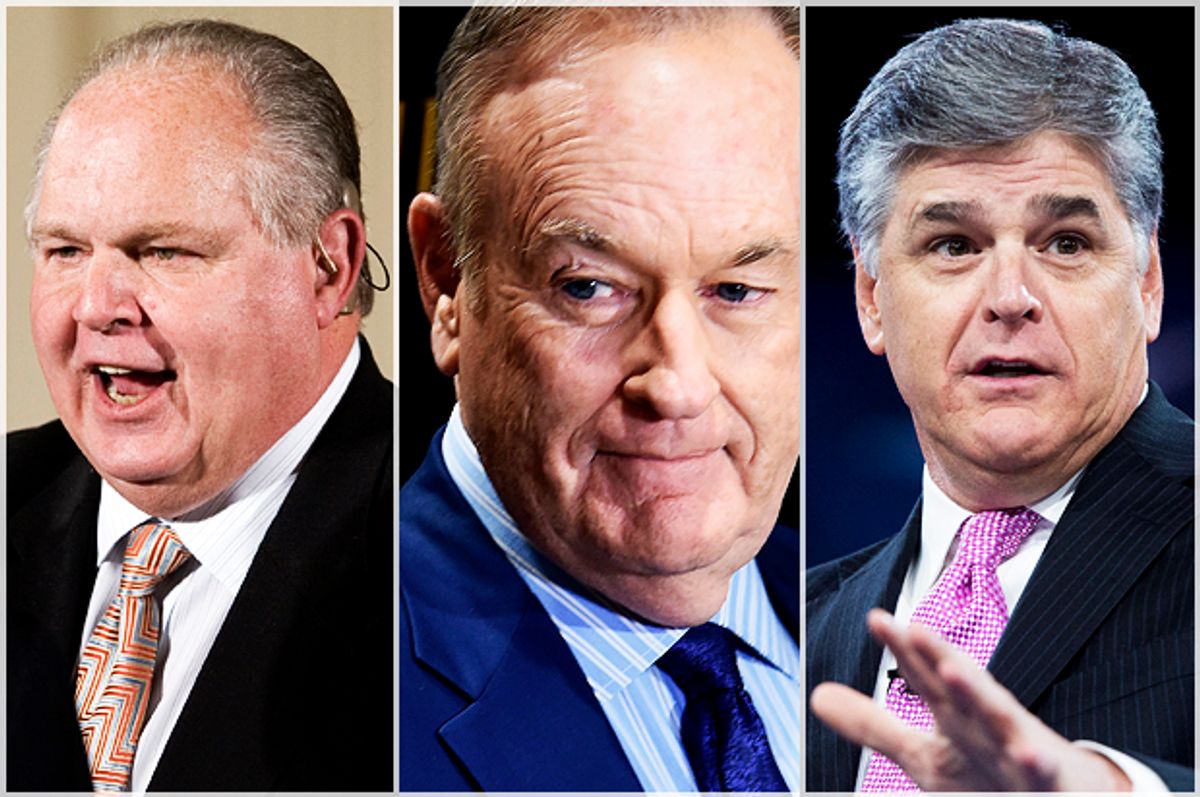 The latest polling shows that Donald Trump is the most unpopular new president in history. Most new presidents, even when elected only by a plurality like Bill Clinton, or under dubious circumstances like George W. Bush, receive at least a short-lived honeymoon in which a majority of the population decides to put aside the rancor of the election and give the new leader a chance.

Of course, most new presidents go out of their way to try to heal the inevitable hard feelings of a tough campaign and reach out to the people who didn't vote for them. In principle, the person who wins the election becomes president of the whole country not just those who gave him their votes.

On the night of the election, Trump gave a standard magnanimous speech. Since then he has never returned to that theme. He has obsessed over his voters, even going on a victory tour only to states that he won and fetishizing his supporters in speeches as "the forgotten Americans who will never be forgotten again." To everyone else he has simply issued edicts effectively saying, "We will come together." (Left unsaid is the obvious: "or else.")

On New Year's Eve he made himself very clear with this juvenile tweet:

On Sunday night during Trump's Super Bowl interview with Bill O'Reilly, Trump said that California is "out of control" and suggested he might withhold federal funds to the state if it doesn't do what he wants it to do. He is purposefully antagonizing the most populous state in the nation. (Which, not coincidentally, overwhelmingly supported his opponent.)

This is not the only reason he's unpopular, of course. Trump's flurry of executive orders and bizarre behavior toward foreign leaders have horrified tens of millions of Americans. Opposition to his policies is fierce, substantive and widespread.

But Trump is not universally unpopular. Indeed, he has maintained the support of roughly the same number of people who voted for him. News stories about his followers depict people impressed with his unwillingness to reach out to his political opponents because they believe they were treated with massive disrespect for eight years by former president Barack Obama. They appreciate that Trump is doing to Democrats what they believe was done to them.

One can certainly argue whether Obama ever treated them with anything approaching the level of disdain that Trump displays toward people who oppose him. But that's missing the point. That sense of persecution has been part of the conservative movement for decades. What's different now is the extent to which Trump's followers see a completely different presidency than the rest of the world sees. That's because they are watching, reading or listening to right-wing media — and right-wing media is showing them a presidency that does not exist.

Former conservative talk-radio show host Charlie Sykes wrote a courageous op-ed for The New York Times over the past weekend that took a hard look at how so many people came to believe Trump's lies and why they are so willing to accept what presidential adviser Kellyanne Conway has called "alternative facts." Sykes put the blame squarely on the right-wing propaganda machine, which he was a part of for many years.

Trump's followers have been conditioned to believe that the mainstream media is hostile and biased. Hearing the president attack CNN or The New York Times with the same ferocity they hear from Michael Savage or Mark Levin validates their beliefs beyond anything they could have imagined. Sykes wrote:

For years, as a conservative radio talk show host, I played a role in that conditioning by hammering the mainstream media for its bias and double standards. But the price turned out to be far higher than I imagined. The cumulative effect of the attacks was to delegitimize those outlets and essentially destroy much of the right’s immunity to false information. We thought we were creating a savvier, more skeptical audience. Instead, we opened the door for President Trump, who found an audience that could be easily misled.

Many in the conservative base are no longer capable of knowing truth from fiction. They have been fed BS for so long and with such relentless purpose that they no longer have BS detectors at all.

Sykes pointed out that White House press secretary Sean Spicer took this phenomenon to a new level when he said that Trump's belief that the unfounded charges of voter fraud was evidence that the voter fraud happened, which is mind-boggling. He also noted that Spicer refused to answer a question about the unemployment rate, which suggests the administration will have no problem making up numbers to back up claims that Trump is massively improving the economy.

Furthermore, administration officials can do this in full confidence that right-wing media outlets will provide cover for their claims. As Sykes said, conservatives "believe they have shifted the paradigm of media coverage, replacing the traditional media with their own." In other words, Breitbart is now their paper of record. Fox News is their Tiffany network. Rush Limbaugh is their Walter Cronkite.

This has been happening for quite some time. I remember an incident way back in 2004 when Republican operative Mary Matalin called up Rush Limbaugh's show to complain about The New York Times and gush over Rush's alternative facts:

[W]hen I listen to you, I get all the information I need, and I — and I — it is — I have a confidence in the president [George W. Bush], in the policies, in the goals. I have — I know his conviction. I know he's right and I know he has the leadership to do it. What I don't have, and what I can only get from you, is the cheerfulness of your confidence —

Matalin is a pro who knew what she was doing. But the people who were listening that day, and who listen every day, don't necessarily have her detachment. They may once have understood that Rush was a hyperbolic entertainer, not a newsman. But as Sykes said, after years of relentless propaganda they have lost their ability to discern truth from fiction, news from fake news, facts from alternative facts. He pointed out that this leads to a situation whereby "the leader becomes the only reliable source of truth; a familiar phenomenon in an authoritarian state, but a radical departure from the norms of a democratic society. The battle over truth is now central to our politics." It's going to be a tough fight.