Neo-Nazis, Klansmen and other hate groups always suspected Trump was their guy, and now they're sure of it 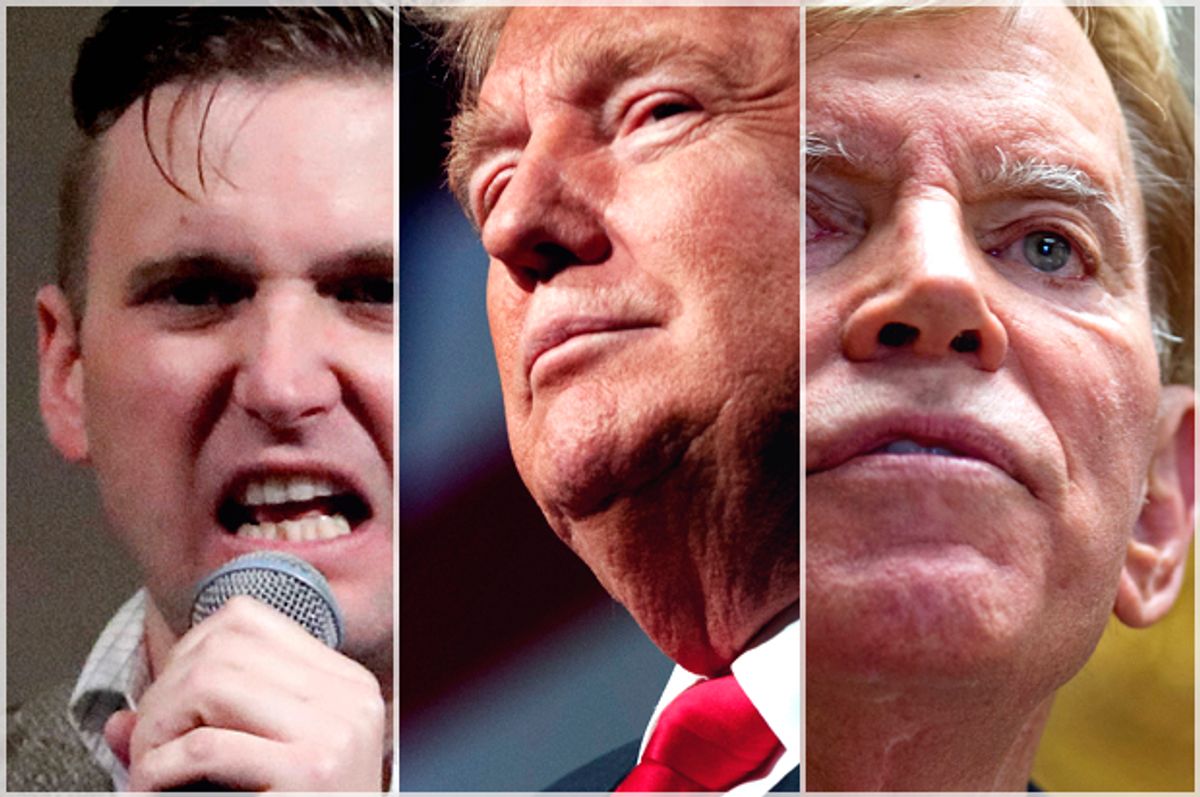 President Donald Trump no longer has any need for "dog-whistle racism" or subtlety. He now acts unapologetically and with boldness. Last week Trump's administration indicated that the Countering Violent Extremism program would no longer track white supremacist organizations. This shift of federal resources is but one more sign that Trump's administration does not view protecting the civil rights of African-Americans and other people of color as an important mission.

Trump's base of white supremacists and white nationalists, on the other hand, is rejoicing. A signal has been sent, and such individuals have heard it loud and clear.

News of Trump’s plan to reverse that symbolic recognition of right-wing threats prompted a wave of celebration in white nationalist circles.

“Donald Trump wants to remove us from undue federal scrutiny by removing ‘white supremacists’ from the definition of ‘extremism,’” the founder and editor of the neo-Nazi website The Daily Stormer (which takes its name from a Nazi propaganda publication) wrote in a post on the site. “Yes, this is real life. Our memes are all real life. Donald Trump is setting us free.”

But in Trump’s move to take even some measure of scrutiny off of far-right extremism, The Daily Stormer sees a direct parroting of their own writing and a reward for the far-right’s role in getting Trump elected.

“It’s fair to say that if the Trump team is not listening to us directly (I assume they are), they are thinking along very similar lines. We helped get Trump get [sic] elected, and the fact of the matter is, without Alt-Right meme magick, it simply wouldn’t have happened,” the post continues. “This is absolutely a signal of favor to us.”

Another neo-Nazi site that associates itself with the so-called “alt-right,” Infostormer, celebrated the news and took it as a sign of support. “We may truly have underestimated President Trump’s covert support of our Cause (at least in some form), but after this proposal, I am fully ready to offer myself in service of this glorious regime” the post reads.

This policy change cannot be viewed in isolation. It is part of a larger pattern.

White supremacist organizations have been effusive in their praise of Donald Trump's 2016 campaign and now his presidency. They view him as their champion and at the very least a fellow traveler in sharing their hateful ideology.

Trump's defenders would say that such "guilt by association" is unfair and no public figure can be held responsible for all his supporters or endorsements. At least in this instance, this is superficial thinking and a weak logic.

White supremacists and other hate groups are attracted to Donald Trump for good reason. Trump has done the following:

2. Vowed to build a wall on the Mexican border and deny "illegal immigrants" access to social services and other assistance.

3. Refused to allow blacks and other people of color to lease property in his buildings.

4. Placed white-nationalist sympathizers such as Bannon and Miller in senior White House roles.

5. Nominated for attorney general Sen. Jeff Sessions, a man who has repeatedly shown his disdain for African-Americans and actively worked to suppress their voting rights.

6. Threatened, at least by implication, to declare martial law in black and brown communities such as Chicago.

Ultimately, these statements and policies are in full agreement with the policies advocated by white supremacists and white nationalists.

The president of the United States has many responsibilities and obligations. His formal obligations include serving as the chief executive, commander in chief of the armed forces, chief law enforcement officer and chief diplomat. The president's informal responsibilities include being the protector of economic prosperity, head of state, national cheerleader and the country's moral leader.

Trump has now added an additional job title and responsibility: He is the white nationalist in chief of the United States of America. Unfortunately, his affinity for overtly racist policies and beliefs is not in and of itself an impeachable offense.