Thanks, Trump! "Saturday Night Live" reclaims its satirical mojo amid a national emergency 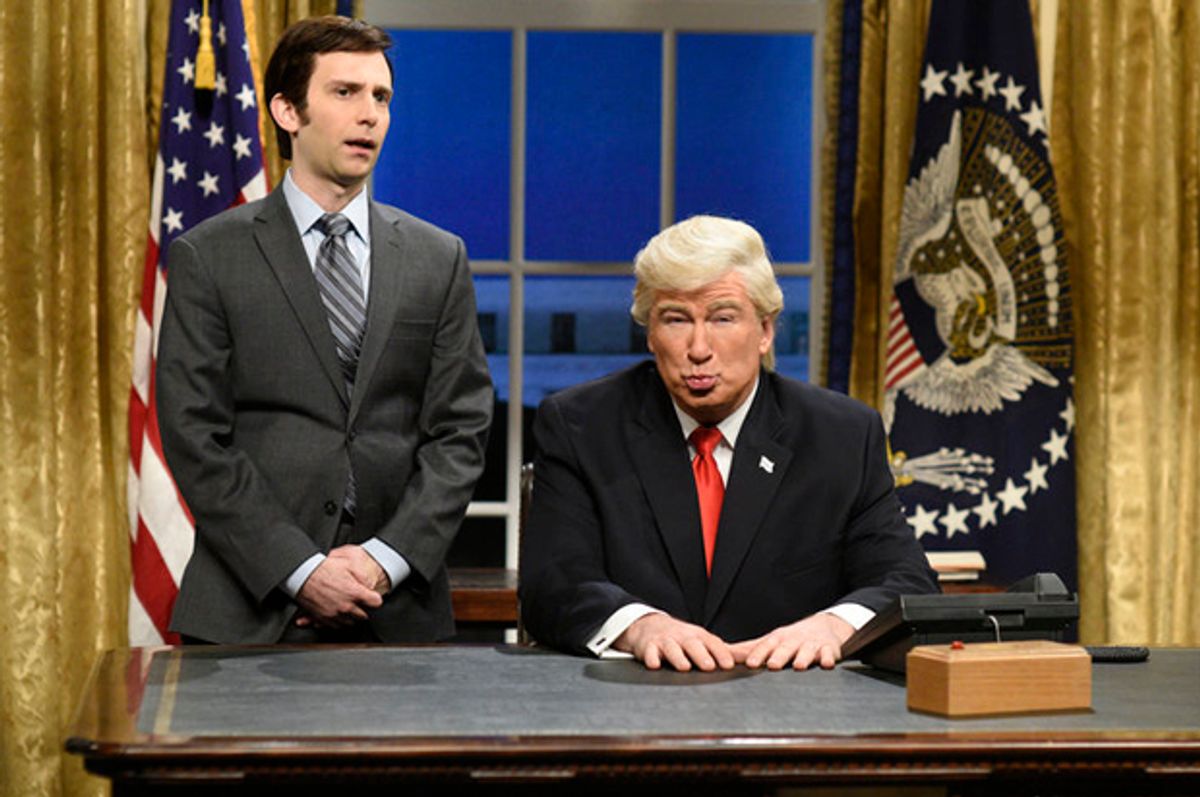 For the better part of a decade, NBC's "Saturday Night Live" seemed to be all about manufacturing viral videos for social media and pandering to an almost insufferable “both sides are equally evil” take on American politics. When "SNL" wasn’t churning out weird-for-weirdness-sake viral hits, it was carefully balancing its criticisms of the Republican Party — a longtime target of the legendary late-night sketch show — with obvious and self-conscious jabs at president Barack Obama and the left. Some of it was deserved, while, other times, "SNL’s" political satire felt soft-pedaled and awkward.

During that time, the impact of "SNL" on the American political scene was eclipsed by “The Colbert Report” and “The Daily Show,” as well as cult-classic films like “Idiocracy” and especially sketch shows like HBO’s “Mr. Show with Bob & David.” As the George W. Bush years wore on, much of the greatest political satire was found online, beginning with Flash cartoons during the dot-com boom and exploding into a media phenomenon via YouTube in 2006. Even a basic cable network like VH1 unexpectedly tested the political satire waters with a short-lived animated sketch show I created and produced, circa 2003 through 2005, called “VH1’s Illustrated,” where we ripped everything from Guantánamo Bay and drug legalization to Dick Cheney's raping of national parks for oil.

To be clear, when I talk about political satire, I’m specifically referencing short or long-form comedy that focuses its weapons on nefarious social and political elites — targeting powerful villains where it hurts them the most and, more important, owning the message. No apologies. No quarter.

"SNL" used to do this. The cast that emerged in the mid-1980s, for example, created political sketches that both defined and ridiculed the rightward shift in politics during the Reagan era. With its classic sketch about Reagan’s dual personalities, one affable and one brutal and calculating; or Dana Carvey’s George H.W. Bush — complete with Dan Quayle played by a 12-year-old boy; and Phil Hartman’s outstanding Bill Clinton, gregariously illustrating the interdiction of U.N. relief supplies by Somali warlords using menu items from McDonald’s, this period represents  a high-water mark for "SNL" as a whole and for two of its most legendary political minds, Al Franken and Tom Davis.

Fast-forward to the modern era, and while political comedy had flourished on many other platforms, "SNL" somehow had lost its satirical edge — until this year, that is, and the ascendancy of Donald Trump. It’s difficult to fully encapsulate the importance of the re-emergence of "SNL" as a force for unrelenting political satire. For the first time in at least a dozen years, Lorne Michaels, along with head writers Chris Kelly and Sarah Schneider and naturally this season’s cast, are producing political satire that’s both outrageously funny and totally merciless.

Clearly, Alec Baldwin’s Trump is the centerpiece of the season. And it’s what Baldwin and the crew do with Trump that makes these sketches so wonderful. Unlike in previous seasons, Baldwin’s Trump sketches aren’t simply about an amusingly accurate impersonation. On the contrary, this time around "SNL" is aiming these sketches directly at Trump’s fragile, delusional ego and the show is not pulling any punches. Everything is on the table, and no one in the White House is safe from the "SNL" juggernaut.

Whether the cast is hitting Trump’s erratic cluelessness or Kellyanne Conway’s frantic spin control, cleaning up her boss’s aforementioned erratic cluelessness with her intolerable knack for deflection, or whether it’s Steve Bannon as a Grim Reaper shadow president, there’s almost nothing about Trump’s circus sideshow that "SNL" won’t seize upon. Hell, even the small details make for big statements, like Baldwin's wearing of a Russian-flag lapel pin during last weekend’s cold open.

What makes the Trump material on "SNL" so brilliant is that, perhaps for the first time, the cast and crew are more than aware that Trump is watching. Rather than being deferential, "SNL" is deliberately crawling up Trump’s ass, and the cast knows this is working, thanks to Twitter. With Trump as the target, there’s a heretofore nonexistent third dimension added to the comedy now. Namely, we know for a fact that Trump despises it and will absolutely obsess about it for days. We know it damages him.

Combined with the jokes and the impressions, this third dimension — call it the Trump effect — gives us a near-perfect illustration of what political satire ought to do: trolling the powerful and despotic, while knowing for certain that it’s having the desired impact. Again, we know he’s watching and it’s destroying him. I’d give just about anything to have surveillance footage of Trump watching one of Baldwin’s performances. He has to be seething, face redder than his ridiculous tie, screaming at the television until hoarse, while internally dying a little more every second.

Now we have Kate McKinnon’s unbelievably accurate impression of Trump’s beleaguered spinbot Kellyanne Conway and, as of last weekend, Melissa McCarthy, too. McCarthy’s unexpected Sean Spicer sketch was perhaps the only Trump-related bit to overshadow Baldwin’s ingenious cold open. Once again, we’re treated to an endlessly hilarious “press briefing” sketch that’s made even better with the inclusion of the Trump effect — the knowledge that it was so unapologetic and so ruthless, there’s perhaps a wishful possibility Trump could fire Spicer because of it.

No, the impact wasn’t solely because Spicer was played by a woman. It was that McCarthy’s impression of Spicer was definitive. There won’t be a better Spicer impression; it’s hers now. McCarthy’s Spicer reminded me of Dana Carvey’s process for celebrity impersonations, in which it’s more about nailing the vibe of a character than sounding like a recording of the person. It’s the difference between a Carvey impression and, say, a Darrell Hammond sound-alike.

It’s important to note that during the Felicity Jones episode a few weeks ago, there were three feminist-leaning sketches in a row during the first 40 minutes of the show, including one that featured McKinnon as the ghost of Susan B. Anthony. On the same night as McCarthy’s Spicer sketch and Baldwin’s Grim Reaper sketch, there was a filmed satire of the Trump administration’s Muslim ban in which an overworked bureaucrat is tasked with awkwardly editing Trump’s new anti-Muslim travel rules into a customs video for passengers on an international flight. This is what political satire is all about.

At the risk of being overly effusive, it’s difficult to underscore how valuable "SNL" has become in the era of Trump. Baldwin, McCarthy, McKinnon and the rest of the troupe are giving America what we so desperately need right now. They’re saying exactly what has to be said and doing so with a direct line to Trump’s addled brain. In some cases, the "SNL" cast might even be risking its own safety. Despite this, they’re rolling on and there’s no sign of their letting up. "Saturday Night Live" has the power, now more than ever, to undermine an administration that transparently seeks to suppress objective reality and oppress the people. And the show has more than risen to the occasion.

Choosing the finest era in the 40-year history of "SNL"  is impossible, but I’d suggest this era is perhaps its most important. I’m relieved and confident to report that truly subversive and smart political satire has triumphantly returned to Studio 8H. Please keep it coming.