By letting Trump skate, O'Reilly blew the opportunity to prove his own fair and balanced interlocutor claim 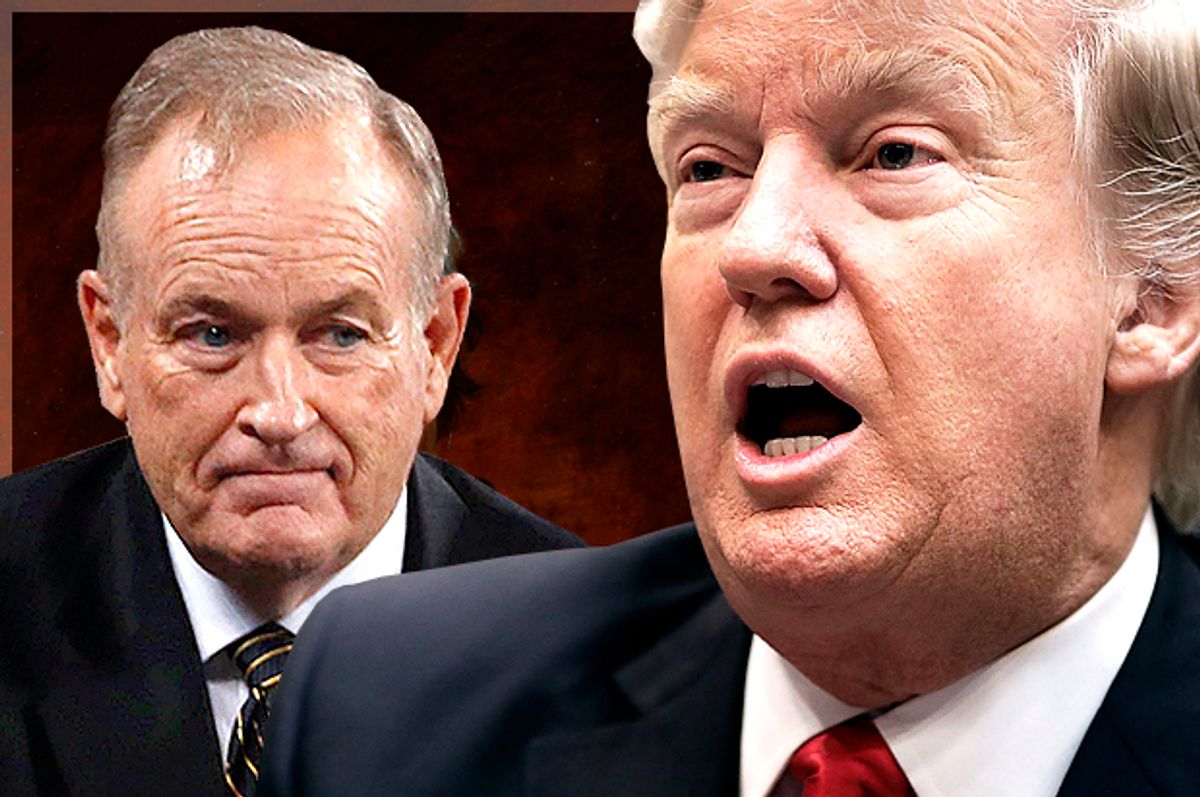 Bill O’Reilly is not a man of principle.

If there were viewers unconvinced about whether O’Reilly is as fair and balanced and indiscriminatingly tough as he likes to project, Sunday’s Super Bowl interview of President Trump should have tipped the scale. Take a moment and imagine how O’Reilly would have reacted if Barack Obama had defended Vladimir Putin's violent record by saying, "There are a lot of killers. We got a lot of killers. What, do you think our country's so innocent? We’ve made a lot of mistakes."

Now, juxtapose that imagined reaction with O’Reilly’s response to Trump: “Mistakes are different than —”

That was it. O’Reilly didn’t raise his voice, turn red in the face, gasp — nothing. Trump proceeded to interrupt O’Reilly and O’Reilly moved to the next subject (Mexico). This was one of several moments throughout the interview when O’Reilly kowtowed to Trump and it was the most illuminating. O'Reilly would insist with glee that Trump brought Ford jobs back to America because Trump “intimidated them.” After questioning Trump’s data on voter fraud, he acquiesced, saying, “Let’s get to the bottom of this.” He didn’t correct Trump when he repeated the lie that he had been against the Iraq War from the beginning),

At once, Trump was sympathizing with Russia and questioning American exceptionalism. Each of those sentiments runs counter to decades of American conservatism, the type of conservatism that Bill O’Reilly has always represented. O’Reilly made it clear that he was dubious of what Trump was saying, but he ultimately shrugged.

There’s an argument to be made that the job of an interviewer is to ask questions and allow the public to process information and that this is the technique that O’Reilly was employing. But there are two problems with that argument. First, that’s never been Bill O’Reilly’s style. O’Reilly often becomes confrontational when he disagrees with someone he is interviewing; just watch his 2014 Super Bowl interview with former president Barack Obama. Second, it is also an interviewer’s job to provide context for the audience and not allow widely disproven claims to be left ambiguous. O’Reilly did a poor job with each.

Yesterday’s interview could have been a big moment — O’Reilly called the interview “the most important interview of my life.” But O’Reilly made it small. Rather than channel conservative apprehensions about Trump’s most fearsome moves (and there have been a lot) to a mainstream audience, O’Reilly used his 10 minutes to normalize Trump.

That O’Reilly, a supposedly tough-minded and free-thinking conservative, kissed the ring rather than confront Trump on things that he clearly found objectionable is not only a squandered opportunity. It is a troubling sign because Congress’ current composition necessitates that conservatives who pride themselves in their toughness be tough when it’s hardest. That would be principled.