Has Trump snapped the tether? His claim that media "doesn't want to report" terrorism suggests he's lost contact with reality

Trump did a dozen things last weekend that would have provoked a crisis — for a normal president. He's not normal 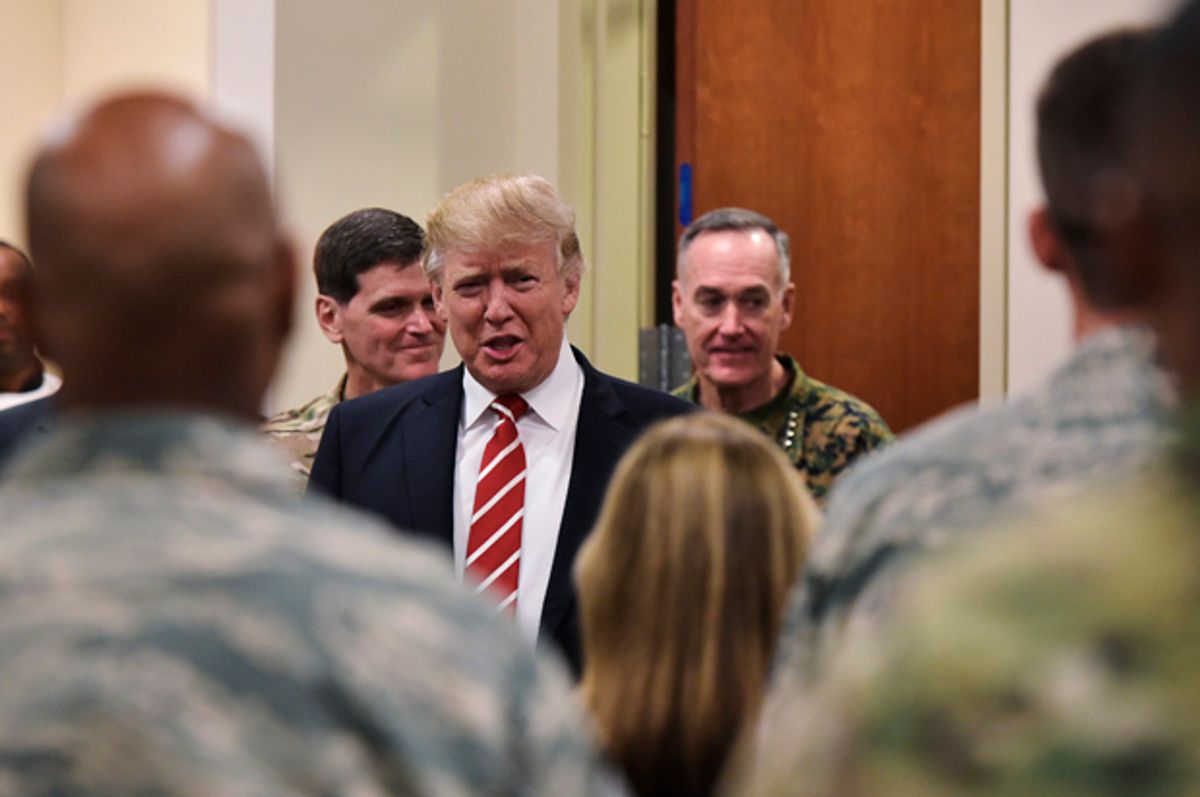 President Donald Trump is almost completely disconnected from reality. I wish I were just being hyperbolic and partisan, but I’m not. It's difficult in this age of snappy internet takes and outraged social-media memes to fully emphasize how dangerous it is that the president’s mental health is this shoddy.

Based on his most recent public statements via Twitter and Fox News Channel, it should be obvious to anyone, even many of his voters, that his cheese has leaped from his cracker and is currently in an endless death spiral into the abyss.

In the last 72 hours alone, Trump has defended Vladimir Putin's lengthy roster of political assassinations by telling Fox News audiences that America is responsible for similar deaths. He has attacked James Robart, the “so-called” federal judge appointed by George W. Bush who ruled against Trump’s Muslim ban (or is it?), pre-emptively blaming Robart for any future terrorist attacks. He has threatened to somehow "defund" California — the entire state! — without explaining what that might mean.

Trump has insisted that any polling data indicating that he's unpopular is clearly fake news. And as we recently learned, Trump signed an executive order placing Steve Bannon on the National Security Council without actually reading the order first.

Again, all that news dropped over the weekend, when Trump was supposed to be on vacation at Mar-a-Lago.

Any one of the above news stories would have erupted into its own news cycle, dominating headlines and triggering numerous congressional hearings — if the president in question had been Barack Obama or Hillary Clinton. Hell, George W. Bush was never this addled and mentally unstable, at least in public. Members of Trump’s ruling party, however, don't care. As long as Trump’s approval numbers remain above 40 percent and he signs what they feed him (Congress hasn't delivered any real legislation yet), they’ll continue to excuse, if not backstop, his obvious psychological instability and rank incompetence.

Naturally, the question of the year — the question GOP leadership is publicly ignoring — is whether Trump is mentally fit to deal with a major crisis. Is he fit to make life and death decisions that could affect millions of lives, American or otherwise? Given everything we’ve observed so far, the obvious short answer is: No chance in hell.

Trump appears to be operating on a different and more twisted plane of existence than the rest of the world. If someone were to tap into his mind and create an illustration of what’s going on there, it would have to look like a Hieronymus Bosch painting. He's this close to talking to shadow people and frantically tweaking VCRs in the White House residence. Trump isn’t experiencing the same truth and reality that the rest of us are. He’s gone bye-bye.

If that’s the case, what happens if the economy crashes? Will he even acknowledge the event or will that, too, be labeled “fake news"? What if Putin decides to march into Eastern Europe? What if there’s another crisis at a nuclear power plant? What if there’s a major earthquake in California? Does anyone have confidence in Donald Trump's ability to soberly and competently mobilize the federal government in response? Be honest.

Refusing to accept basic arithmetic or insisting that it's necessary to defund the world's sixth largest economy, that of California, because it's "out of control" (it's totally not) is indicative of a man suffering from a severe mental health crisis. Imagine what you might conclude if your doctor told you it was OK to smoke two packs of cigarettes a day because the lung cancer rate is fake news. I'm not qualified to diagnose what Trump’s specific problems might be and even for professionals it's not ethical to diagnose a patient's condition without examining the person first, so I won't go there. Nevertheless, anyone who can read a history book knows this is abnormal. It's abnormal for anyone to be this untethered from reality, much less the president of the United States.

And then on Monday, while speaking to U.S. Central Command, Trump said this:

“You’ve seen what happened in Paris, and Nice. All over Europe, it’s happening,” he said to the assembled military leaders. “It’s gotten to a point where it’s not even being reported. And in many cases the very, very dishonest press doesn’t want to report it. They have their reasons, and you understand that.”

So in Trump's warped noggin, the press doesn't want to report on terrorist attacks.

Yes, the old maxim "if it bleeds it leads" has been abandoned because . . . wait, why, exactly? In the real world, the press has absolutely not refused to cover terrorism. Indeed, it's quite the opposite. Even the mere threat of an attack makes for awesome ratings and newspaper sales. Plus, it's terrorism: People die, often in horrendously brutal ways. It's newsworthy. It always is. This is one issue area where the press has gone above and beyond the call of duty. If anything, the media has covered terrorism too much and too intensively, inculcating a level of fear that's out of proportion with the actual danger.

Along those lines, the most disgusting aspect of these remarks from our so-called president is the fact that Trump constantly brings up the ISIS beheading videos. He seems weirdly focused on the nightmarish videos of captured "infidels" having their heads sawed off with knives by black-clad thugs. If Trump bothered to take a few minutes to think things through before blurting his usual gibberish, he'd recall that several of the people so gruesomely murdered were journalists.

Does Trump remember the names Daniel Pearl, James Foley or Steven Sotloff? Probably not. In case he’s paying attention, Pearl was a Wall Street Journal reporter who sacrificed his life in order to cover terrorism in Pakistan during the early days of the global war on terror. James Foley was a journalist covering the Syrian civil war for the GlobalPost when he was kidnapped by ISIS. Later, Foley figured in the terrorist group's first beheading. Steven Sotloff reported for several publications and networks including Time, The Christian Science Monitor and Trump’s favorite channel, Fox News. Sotloff appeared at the end of the Foley beheading video and was later beheaded on video by ISIS. To this day, we can watch Foley, Sotloff and Pearl die online. (I, for one, refuse to do so.)

While Trump wanders the halls of the White House, apparently alone in his bathrobe, thousands of journalists are covering international and domestic terrorism, risking their lives in ways Trump can never understand. In spite of their heroism and efforts to seek the truth, the president is impugning their sacrifices while accusing journalists of reporting "fake news."

Maybe he should meet with Pearl’s family and explain to his widow and teenaged son that journalists don’t cover terrorism. Unfortunately, it’s doubtful that the president possesses the empathy or mental acuity to comprehend such a meeting. It’s one out of a thousand reasons why the presidency requires a sharp, centered, grounded temperament and a kind of gravitas of which Trump is incapable. The people who elevated him to the White House and, in doing so, failed to take his psychological condition into consideration, believing he was just being funny or eccentric, are ultimately the ones who can convince him to seek help or to step aside for the good of the nation. It’s a matter that at first just seemed frustrating and now seems urgently necessary, before Trump says or does something that causes irreparable destruction.