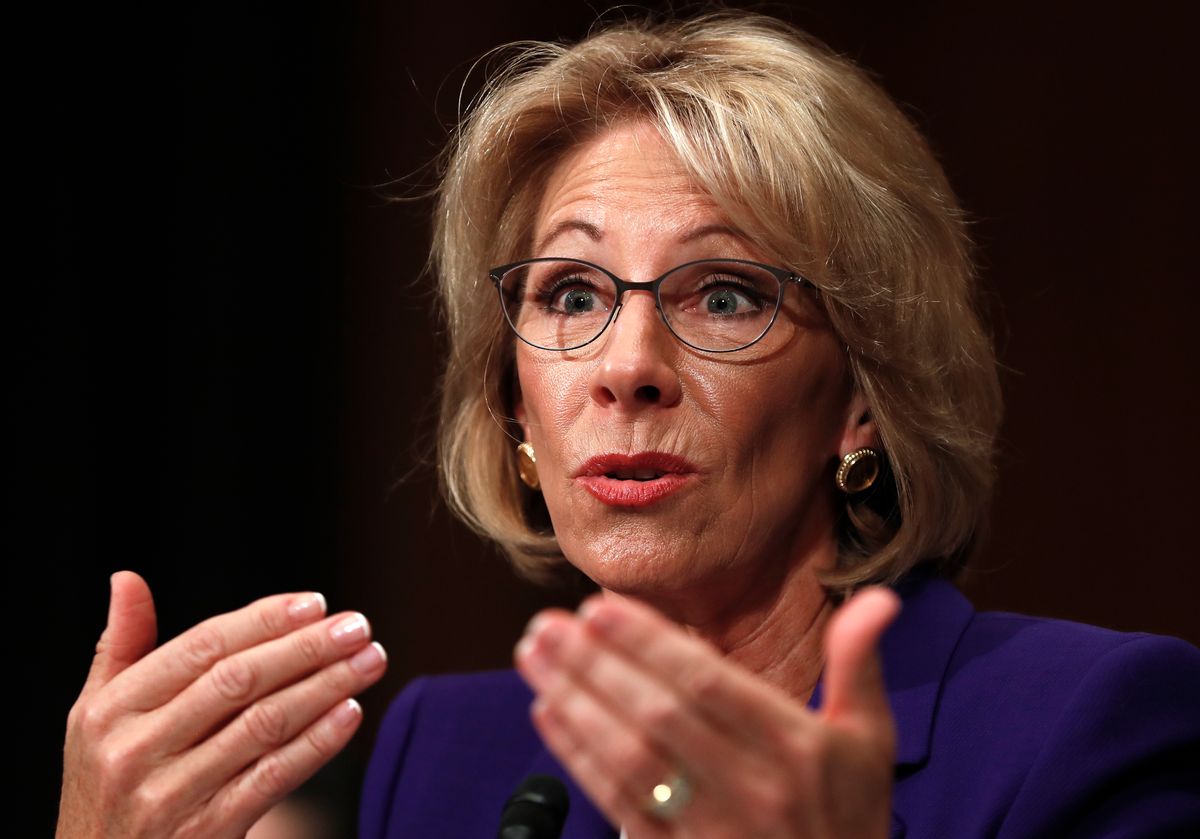 Only 100 U.S. senators — not the general public — will vote to approve President Trump’s cabinet nominees.

But that’s not stopping several conservative organizations from launching ad blitzes promoting Trump’s Cabinet picks — most notably Betsy DeVos, Trump’s nominee for secretary of education, who critics have panned as a wealthy partisan hack with no practical experience in public education.

Two conservative nonprofit groups in particular, the Club for Growth and America Next, are pushing back hard, producing broadcast television ads supporting confirmation of DeVos, a GOP megadonor and staunch advocate for charter schools and school vouchers.

Both Club for Growth and America Next are nonprofit groups organized under Section 501(c)(4) of the federal tax code. That means their primary mission has to be social welfare, a category that includes issue advocacy ads that don’t specifically seek to influence a political election.

Such groups aren’t required to reveal their donors, which means the public has no way of knowing who is paying for the pro-DeVos ads.

The lion’s share of those TV ads came from America Next, which aired nearly 300 spots nationally through Feb. 5, according to data provided to the Center for Public Integrity by Kantar Media/CMAG, which tracks television advertising. Former Louisiana Gov. Bobby Jindal created America Next in 2013.

“Why is the radical left so full of rage and hate?” asks the off-camera narration for one spot, called “Angry Liberals.”

It continues: “They still can’t accept that Trump won and they lost. Now extreme liberals like Elizabeth Warren are trying to stop Betsy DeVos from becoming secretary of education. Why? DeVos angers the extreme left because she exposes their hypocrisy. DeVos wants low income kids to have the same choices that liberal elitists have for their families. DeVos wants equal opportunity in education for all kids and that makes angry liberals even angrier.”

The Club for Growth, meanwhile, aired a handful of spots targeting Sen. Heidi Heitkamp of North Dakota and Sen. Joe Manchin of West Virginia, both Democrats. In both cases, the ad said the senator could be the deciding vote on DeVos and urged viewers to call their senator and tell them to “support President Trump and vote to confirm Betsy DeVos for secretary of education.”

The ads serve several purposes. They certainly put added pressure on senators such as Manchin and Heitkamp at a time when DeVos opponents have swamped senators’ phone lines, organized protests and lobbied against her. The ads simultaneously endear their sponsors to Trump and his administration. They also serve as fundraising tools — particularly the digital ads, which are a couple of clicks away from donation pages.

Two Republican senators, Lisa Murkowski of Alaska and Susan Collins of Maine, have said they will not support DeVos, suggesting her confirmation could result in a 50-50 Senate vote. In case of a tie, Vice President Mike Pence would cast the tiebreaking vote.

The advertising around Trump’s Cabinet nominees is “quite unique,” said Mitchell West, a senior analyst for Kantar Media/CMAG, which tracks political advertising. “This is likely the beginning of a very active and unpredictable year for advocacy advertising.”

The Club for Growth and America Next both didn’t respond to a request for comment from the Center for Public Integrity. Club for Growth is also running digital ads on Twitter and on websites such as National Review. The 45Committee, another conservative nonprofit whose sister super PAC supported Trump during the 2016 election, has also released a pro-DeVos web promotion.

In addition to the advertising effort, dozens of news stories on the DeVos nomination have included quotes from Ed Patru, a spokesman for a group called “Friends of Betsy DeVos.” The group isn’t officially incorporated anywhere, according to Patru, and doesn’t seem to have left a paper trail.

He declined to give the names of anyone involved with the group or the size of it, though he said it’s larger than just him.

“You’ve got a situation where you’ve got really scores of people who are interested in helping out and supporting her but in order to kind of avoid a situation where we have total chaos . . . I’m sort of the designated spokesman for the effort,” he said.

Patru, a former Republican political operative who knows DeVos from his days with the Michigan Republican Party, said he is working pro bono. “I haven’t taken a dime directly or indirectly from Betsy or any of her interests,” said Patru, whose previous work includes serving as communications director for the failed U.S. Senate campaign of Linda McMahon, a top Trump bankroller and the president’s pick to lead the Small Business Administration.

Patru said the group is operating independently of DeVos herself.

But DeVos’ nomination has proven unusually polarizing. Opponents have swamped senators’ phone lines, organized protests and lobbied against her.

“This has never happened before with an education secretary nominee,” said Randi Weingarten, president of the American Federation of Teachers, in an emailed statement.

“We’ve never seen someone tapped for this job who is so ill informed, who is so overtly hostile to public education, and who would give such preferential treatment to for-profit schools, vouchers and other strategies that actively drain funding from public schools.”