Show me a hero: What will it take for prominent Republicans to stand up to Trump? 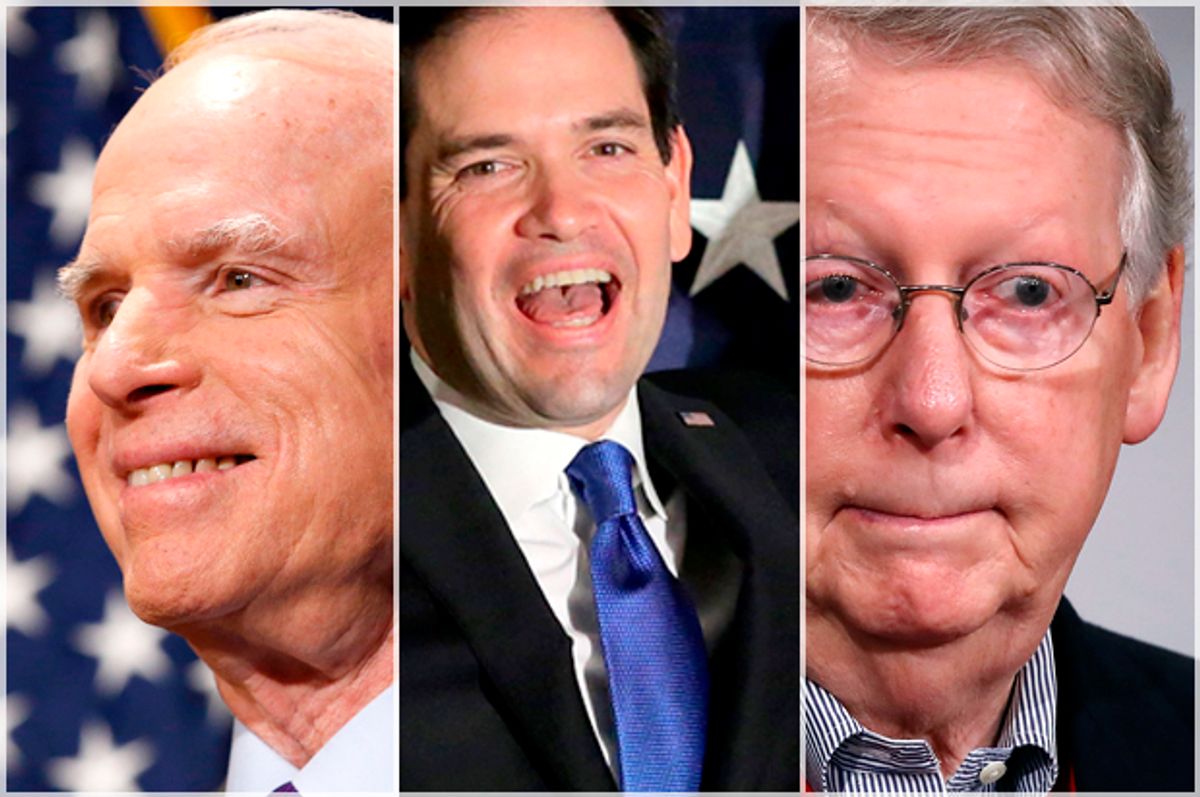 If the Republican Party was not a snake pit full of professional dissemblers, thieves, mountebanks, con artists, power-hungry careerists, principle-free egoists and craven opportunists, one might – might – have started to feel the faint stirrings of an inkling of hope this week that the Grand Old Party is on the verge of pushing back against President Donald Trump's most outrageous actions.

That “cracks” are beginning to open between Trump and Republicans in Congress seems to be the conventional wisdom in Washington. There are some rumors flying around about congressional GOP leaders starting to quietly fight the White House after the botched rollout of its executive order on immigration policy, among other self-inflicted turmoil. There are a few prominent Republicans here and there who are distancing themselves from some of Trump’s more absurd statements.

Neocon hawks Lindsey Graham and John McCain have clearly never been on board the Trump train; neither, for different and perhaps opposing reasons, has lonely libertarian Rand Paul. Over the past weekend, we even saw unctuous majority leader Mitch McConnell criticizing Trump’s Super Bowl comments about Vladimir Putin. Though McConnell was careful to make it clear he disagreed with the president’s statements but was not criticizing Trump himself, you have to imagine that the Kentucky senator would like to have been talking about anything else besides his party's nominal leader praising the autocratic president of Russia.

Other congressional Republicans had responses to the Putin comments that ranged from “mild” to “medium.” Sen. Marco Rubio's taking time away from watching the Super Bowl to send one tweet about his displeasure with Trump does not exactly indicate a groundswell of opposition, though it’s better than nothing.

Then there are some of the harsher critiques coming from other corners of the party. On Monday former Bush administration lawyer John Yoo published a New York Times op-ed criticizing Trump’s use of presidential power. Yoo was most famous during the Bush era for legal opinions that granted the president broad authority and power to fight the "War on Terror," providing a fig leaf for the detention and torturing enemy combatants without due process. He even said he would be OK with an interrogator's crushing the testicles of children if it would get their detained parents to talk.

Now even Yoo thinks Donald Trump is pushing the boundaries of presidential power too far.

All of this might be encouraging, if it mattered worth a damn. The problem is that the grumbling from the GOP has not yet achieved anywhere near enough critical mass to become a problem for the White House.

Congressional Republicans still have Trump’s back when it comes to voting for his Cabinet appointees — even when they are as grossly unqualified as Betsy DeVos, his pick for education secretary — and pushing through Neil Gorsuch’s nomination to the Supreme Court. They are still committed to a legislative agenda of slashing tax rates on the wealthy and repealing Obamacare. Paul Ryan would sell his own mother to the circus if he thought it would bring his long-held dream of a government as imagined by Ayn Rand to fruition. He’s not going to jeopardize it just because Trump spent 10 seconds inadvertently talking like Howard Zinn.

Therein lies the problem for Democrats, and for the country. Right now the legislative opposition is nothing more than a speed bump for the Trump agenda. Democrats in the Senate are slow walking the confirmation of Cabinet nominees and can be expected, with continued pressure from the party's base, to throw the proverbial sand in the Senate’s legislative gears. But at the federal and state levels, elected Democrats are badly outnumbered. Marches and legal challenges will do a lot of the heavy lifting, but they will not be able to stop most of the right-wing governance that is coming down the pike.

What is needed, unfortunately, is a fair number of Republicans who are willing to do more than pay lip service to condemning some of Trump’s more outrageous policies. That is simply not going to happen so long as 90 percent of the GOP's base approves of Trump. John Yoo can write disapproving op-eds every week for the next four years. But without action from prominent figures in the GOP to back up such calls to defend the values of liberal democracy, those jeremiads are mostly worthless.

It is possible that all of this — the stirrings of pushback from congressional Republicans, the disapproval of even the “torture is good” wing of the conservative movement — will eventually have some effect. But one of the talking points among political scientists, theorists and activists in recent weeks has been that “our democratic institutions will not save us.” Unfortunately, we still need them to try or there is no telling where Steve Bannon and his merry band of white nationalists will push this president and the country.