Republicans have invented a delusional storyline about protests around the country

The notion of paid protesters, activists from the far left is "an article of faith" among right wing commentators 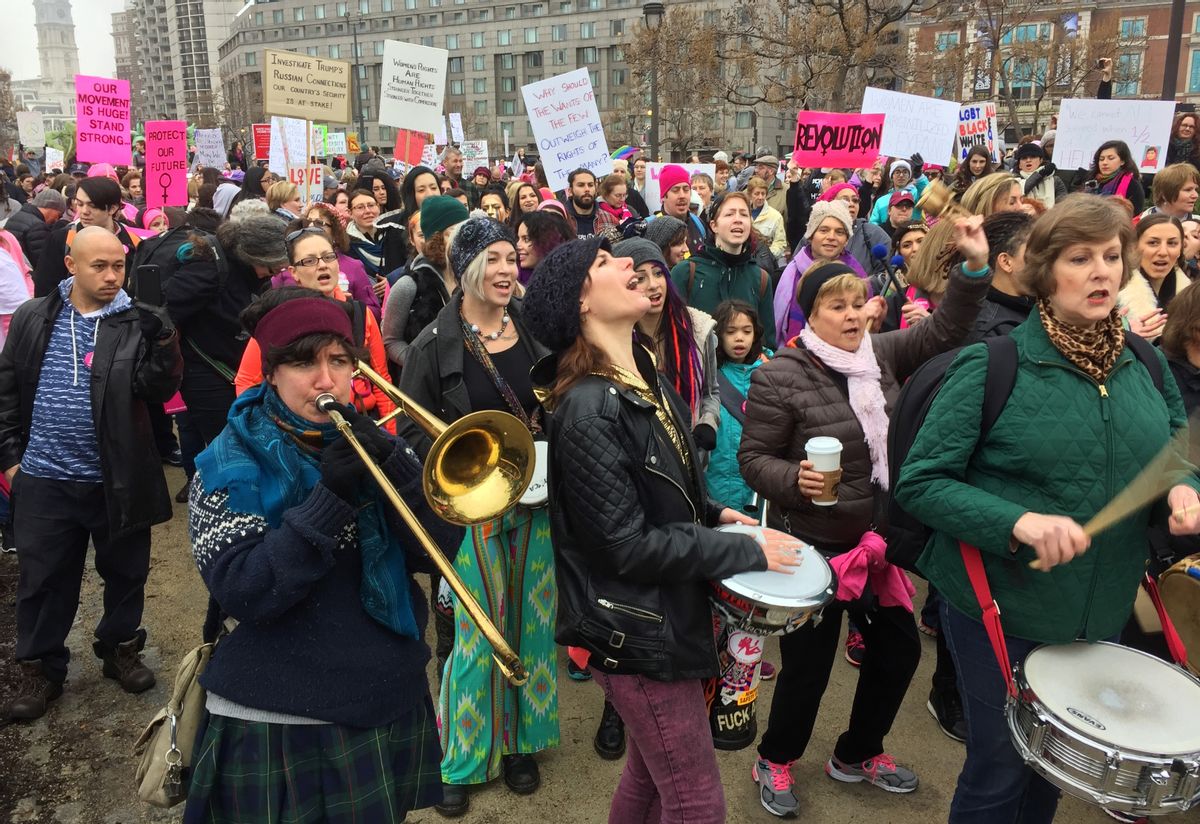 Protesters gather for the Women's March on Philadelphia a day after Republican Donald Trump's inauguration as president, Saturday, Jan. 21, 2017 in Philadelphia. The march is being held in solidarity with similar events taking place in Washington and around the nation. () (AP Photo/Jacqueline Larma)
--

If those who do not remember history are doomed to repeat it, those who conveniently forget recent history are just digging their own graves.

Just to be clear, we’re not talking about the troubling parallel between Trump’s executive order banning refugees and visa applicants from seven Muslim-majority countries and the U.S.’s reluctance to admit Jewish refugees during the Holocaust, although it applies there too. At least, not directly. No, those forgetting recent history are congressional Republicans. Fresh off their recent electoral success, they seem to think the rise of the Tea Party eight years ago was a one-off event, rather than a portent of what is to come in an age of political polarization.

Two weeks ago saw one of the largest popular protests in history in the Women’s March, which drew over three million nationwide, according to some estimates. Last weekend, as Trump’s executive order went into effect, sowing chaos at airports from coast to coast, spontaneous protests erupted, eventually forcing the administration to scale back the ban on green-card holders. Activists, Democrats, progressive and many ordinary previously apolitical Americans, still reeling from the election of Donald Trump and the consolidation of Republican power at all levels of government, seems to have mobilized in a way not seen since Tea Party protests rippled across the country in 2009.

A reasonable Republican surveying all this might be convinced of the need to proceed with caution on a number of political fronts, like dismantling the Affordable Care Act, reproductive rights or immigration. Tea Party Congressman David Brat isn’t going that route. He’s dismissing it all as a liberal conspiracy.

During an interview with the Richmond Times-Dispatch Monday, Brat was asked about the voter backlash in his district against repealing the Affordable Care Act. He said, “There’s paid protestors, paid activists on the far left . . . They’re being paid to go around and raise havoc.”

This is far from a fringe view. It is an article of faith among many Republicans and conservative commentators that those speaking out against elements of Trump’s agenda are not concerned constituents but outside agitators with dubious funding sources. On Monday, Trump lapdog Sean Hannity asked on Twitter, “Who is bankrolling the protests taking place at airports across the country?”

It may be ideologically attractive for Republicans to pretend that the bulk of the dissent from the other side comes from a small, hyper-partisan group with limited electoral clout. But politically, it’s disastrous. The Tea Party’s showing in the 2010 midterms is a case in point. What began as a relatively small movement that seemed a little too enamored with the Constitution and Revolutionary War cosplay quickly delivered the largest House swing since Truman, giving Republicans a solid majority. Now, with a historically unpopular president in office seemingly hell-bent on alienating all segments of the electorate except loyal readers of Breitbart, liberals could be poised to strike back in 2018.

It’s not just those traditionally associated with the left, either. Republicans’ dismissal of the backlash against their policies has rankled some would-be supporters, too. A couple of weeks ago, Talking Points Memo ran a piece, “How the Obamacare Town Hall Script Flipped This Week,” which interviewed Darren Knowles, a special education teacher in Colorado and a two-time voter for George W. Bush, who showed up at Republican Congressman Mike Coffman’s event to voice his concerns about the ACA repeal. After meeting with a few constituents, Coffman slipped out of the event, blaming “partisan activists” for his early departure.

“That really got my blood boiling,” Knowles told TPM. “He said he’d stand up to Trump and this is like Trump’s playbook right here: blame the people who stand up to you. I don’t know what representative Coffman wanted. If we’re concerned, are we not supposed to show up and voice our concerns?”

As congressional Republicans continue to cocoon themselves in a world where people like Mr. Knowles don’t exist, or are the exception rather than the rule, this type of anger and disaffection among their constituents will only intensify, perhaps even to the point that it could further jeopardize their chances of retaining their majorities in both chambers.

Perhaps the greatest irony about the “paid protester” line echoed by many in the GOP is that the Tea Party itself benefited from big-money backers, despite its self-styled image as a popular uprising against government overreach. As the New Yorker’s Jane Mayer reported in 2010, Americans for Prosperity, the Koch brothers’ political advocacy group, coordinated with the Tea Party in 2009, disseminating talking points, funding protests, and cultivating candidates. Meaning the people who participated in Tea Party protests were, knowingly or not, furthering the Kochs’ political agenda.

Despite Republicans’ insistence to the contrary, there is no compelling evidence that the marches and protests cropping up all over the country owe their success to shady funding sources, or a billionaire’s largesse. They have drawn their strength from the widely shared indignation over a president who is quickly confirming his detractors’ worst predictions and a congressional leadership too fearful of its base to stand in his way. Come 2018, Republicans may find they have more to fear from a resurgent activist left.