Bacon shortage could be the result of bad industry 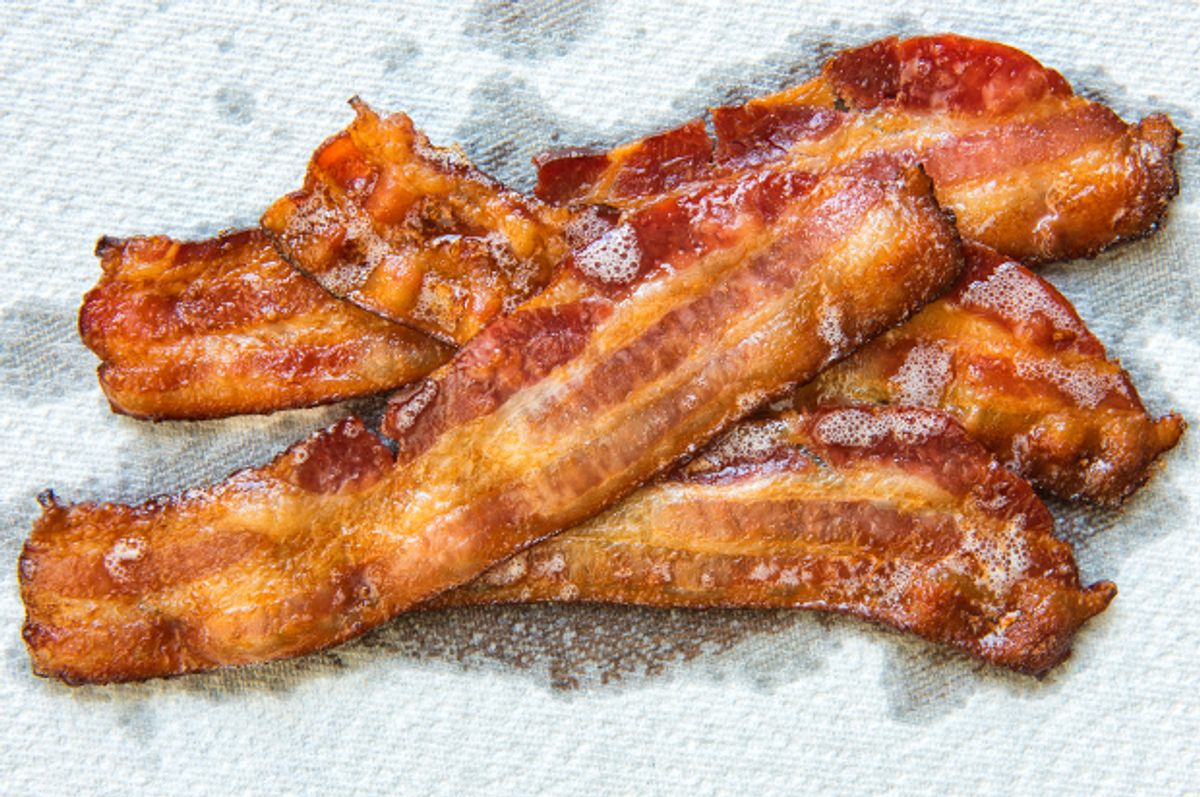 Just as Big Pork has gotten people hooked on bacon as an added ingredient everywhere—even in gum, candy and ice cream—a shortage has been announced. USDA reported that stored pork bellies fell to 17.7 million pounds last month, the lowest December inventory since records began in 1957.

The pork industry doesn't mind news stories about bacon and how people love it so much they will probably be willing to pay more if there is a shortage. What it does mind are stories about the porcine epidemic diarrhea virus (PEDv) outbreak of 2013 and 2014 in which one-tenth of all U.S. pigs died. Yes, you read that right.

By 2014, PEDv had killed at least 7 million piglets in their first days of life, but Big Pork managed to prevent the public from seeing dumpsters full of dead pigs. Why? People might ask: What is happening on factory farms, why are so many animals sick, what drugs are they taking and should we even eat products from such sick animals?

The PEDv scourge was so bad the Humane Society of the United States (HSUS) caught a Kentucky farm that lost 900 piglets within a two-day period feeding dead pigs to other pigs in an attempt to induce "immunity" in survivors. Nice. Footage from the Iron Maiden Hog Farm in Owensboro, Kentucky, shows pigs whose legs had been bound together to keep them standing when they otherwise would have collapsed.

How are piglets with PEDv "euthanized"? By "manually applied blunt force trauma to the head," also known as bashing their heads against a wall, admits the American Veterinary Medical Association. They are also gassed.

Hiding images of PEDv carcasses is not the only time Big Pork has manipulated the news. In 2009 it also managed to get reporters to stop writing "swine flu" and instead write "H1N1 virus." Yet the virus is still widely defined as "a human respiratory infection caused by an influenza strain that started in pigs."

Pork farmers say PEDv will likely never be gone in the U.S.—though news articles about it might be.

There is a reason to reject bacon even if people do not care a whit about animals. The salty bacon flavor so many people love is created by ingredients no one loves—nitrites. Sodium nitrite, also found in ham, pastrami, salami, hot dogs and sausages, inhibits bacteria, lengthens shelf life and imparts the pleasing taste and color that add to these foods’ appeal. But, and it is a big but, during the process of cooking, nitrites combine with other chemicals to form carcinogens, which many health organizations warn against.

Researchers have known since the 1970s that the preservatives become "nitrosamines" in the body—compounds that cause cancer. Following a 2008 American Institute for Cancer Research/World Cancer Research Fund report that found just one hot dog a day increases the risk of colorectal cancer by 21 percent, there were calls to ban such processed meat, especially in schools. Recently, the World Health Organization reignited the controversy and declared processed meats Group 1 carcinogens, the highest risk category that exists. WHO researchers, who analyzed 800 studies, defined processed meat as “anything transformed to improve its flavor or preserve it, including sausages, beef jerky and anything smoked.” WHO researchers identified links from processed meats to colon, prostate and pancreatic cancers and other research links them to lung cancer, kidney cancer, stroke, coronary heart disease and diabetes mellitus. The American Cancer Society tells people not to eat them.

Is the current bacon shortage caused by the porcine epidemic diarrhea virus, which depleted at least a tenth of all U.S. pigs, possibly more? We don't know. What we do know is bacon is not good for humans and that the factory farms that produce it are not good for animals.