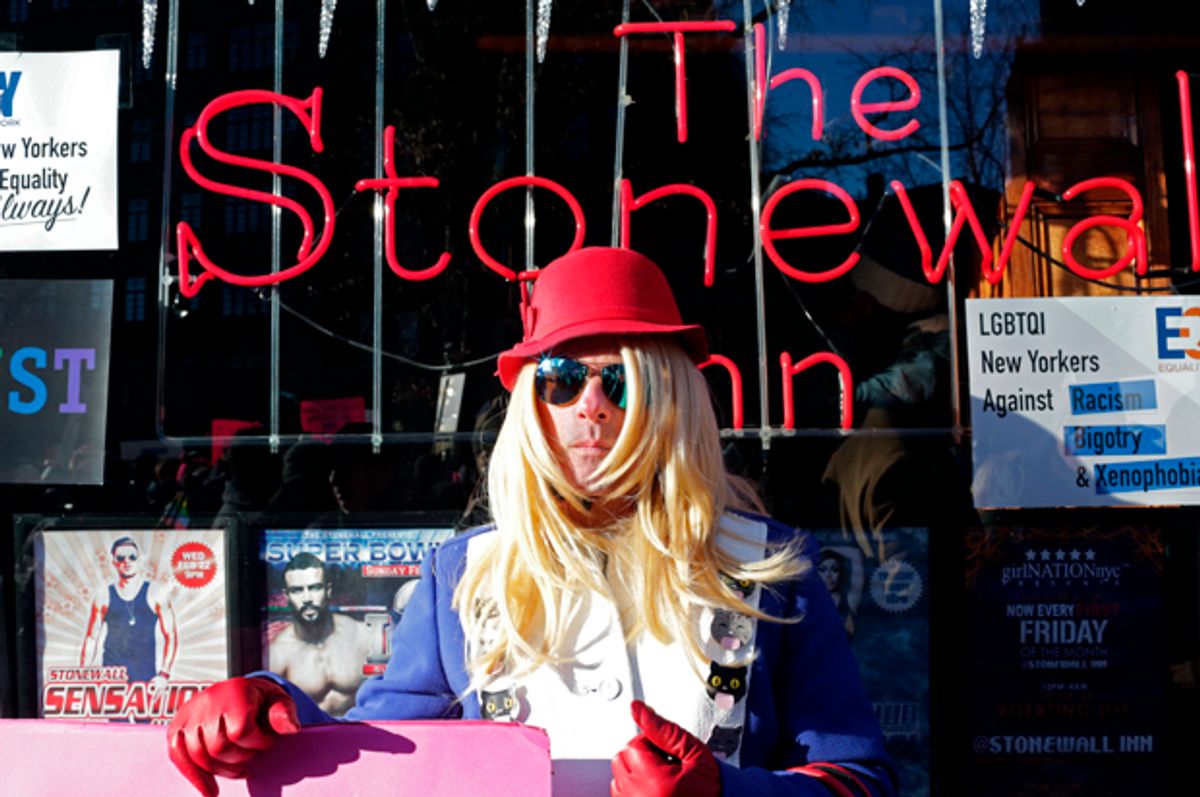 A majority of Americans oppose denying services to LGBT individuals in the name of religion, according to a new poll from the Public Religion Research Institute. Sixty-one percent of respondents said they were against giving faith-based groups or private individuals the religious exemption to, say, refuse to cater a lesbian wedding, or to refuse to sign the marriage certificates of same-sex couples, as Kim Davis, a clerk in Rowan County, Kentucky, made national headlines for doing in 2015.

Sizable numbers of one religious group believe that people like Davis should have faith-based exemptions to protect their right of conscience: evangelical Christians. Fifty percent of evangelicals said they believed that it should be legal to discriminate in the name of faith, as opposed to the 42 percent of that group who said they were against that idea.

That’s not great news for conservatives in the wake of the leak of an anti-LGBT executive order “scuttled” by the White House last week. Politico reported on Friday that Ivanka Trump, the president’s daughter, and her husband, Trump adviser Jared Kushner, led the charge against a four-page document that would have granted broad allowances to religious groups, federal agencies and virtually anyone who wishes to discriminate against the LGBT community. The couple also pushed President Donald Trump to release a statement on Tuesday night promising that the Oval Office was “determined to protect the rights of all Americans.”

“I think throughout the campaign, President Trump made it clear that discrimination would have no place in our administration,” said Pence, who passed a law as the governor of Indiana identical to the executive order that Trump tabled. “I mean, he was the very first Republican nominee to mention the LGBTQ community at our Republican National Convention and was applauded for it. And I was there applauding with him. I think the generosity of his spirit, recognizing that in the patriot's heart, there's no room for prejudice is part of who this president is.”

The vice president did not say that the administration would not pursue another executive order on religious liberty in the future, though. In fact, Sarah Posner — the Nation writer who published the leaked document last week — clarified that the Kushners did not talk Trump out of discriminating against LGBT individuals. What the couple stressed to the president the importance of workplace nondiscrimination protections for LGBT people, which had been outlined in a 2014 order of former president Obama. The draft executive order apparently considered by Trump, though, also allowed for the refusal of health care, housing, and public accommodations on the basis of faith.

“When Trump issued his statement last week about that, that was the only piece of this entire issue that he focused on,” Posner told Democracy Now, adding “the Kushners . . . prevailed upon him regarding that particular employment issue.”

The substance of that draft executive order, it seems, may be introduced in another form. During the annual Prayer Breakfast last week, Trump reaffirmed his support for the repealing the Johnson Amendment, a 1954 law that keeps religious leaders and pastors from endorsing candidates from the pulpit. As I wrote last week, eroding that legislation would let churches openly target minority groups, including the LGBT community, by telling their congregants whom to vote for.

In a Thursday briefing, press secretary Sean Spicer claimed that the president would remain committed to the religious liberty issue. Spicer claimed that religious faith is being “pushed out in the name of political correctness” and further action will be taken by the government to reverse that trend.

“I think people should be able to practice their religion, express their religion, express areas of their faith without reprisal,” Spicer said. “That pendulum sometimes swings the other way in the name of political correctness. . . . So he is going to continue to make sure that we not only speak up for it but find ways in which we can keep that line a little less blurred and make sure that the pendulum doesn't swing against people.”

Trump might just punt the issue to Congress, which is set to debate the First Amendment Defense Act later this year. Passing that bill, which is similar to the executive order scuttled last week, is the real goal of religious conservatives, Christianity Today has reported. While supportive evangelicals believe that Trump’s order was a step in the right direction, his proposed executive order “falls short of some of the legislative protections” offered by the First Amendment Defense Act. Executive orders don't have the scope of legislation.

It’s worth noting that the Ethics & Religious Liberty Commission is the public policy arm of the Southern Baptist Convention, one of the few denominations to support legislation like the First Amendment Defense Act. Even Mormons, a group that’s heavily conservative, are against discrimination in the name of faith, with 52 percent opposing the denial of services to same-sex couples because of religious beliefs. In 2015 the Church of Jesus Christ of Latter-day Saints helped pass a nondiscrimination law in Utah preventing workers from being fired on the basis of their sexual orientation or gender identity, the first such legislation passed by a red state.

Although the voices in support of the First Amendment Defense Act are loud — and include powerful right-wing activists like Tony Perkins and Jerry Falwell Jr. — they are increasingly outnumbered. Last week hundreds of faith leaders signed a letter to the White House imploring Trump to not single out members of the LGBT community for discrimination. These religious objectors were joined by the thousands who went to New York City’s Stonewall Inn on Saturday to protest the president's anti-immigration executive order as well as the scuttled executive order that would have curbed LGBT rights, which he has not ruled out signing at a later date. They will keep speaking out at the slightest hint of any action to roll back the rights of the LGBT community in these next four years.

And as the PRRI survey indicated, there are even more of them than you think.