A Trump sellout: Alex Jones trashed by former editor for playing “the race and religion card” 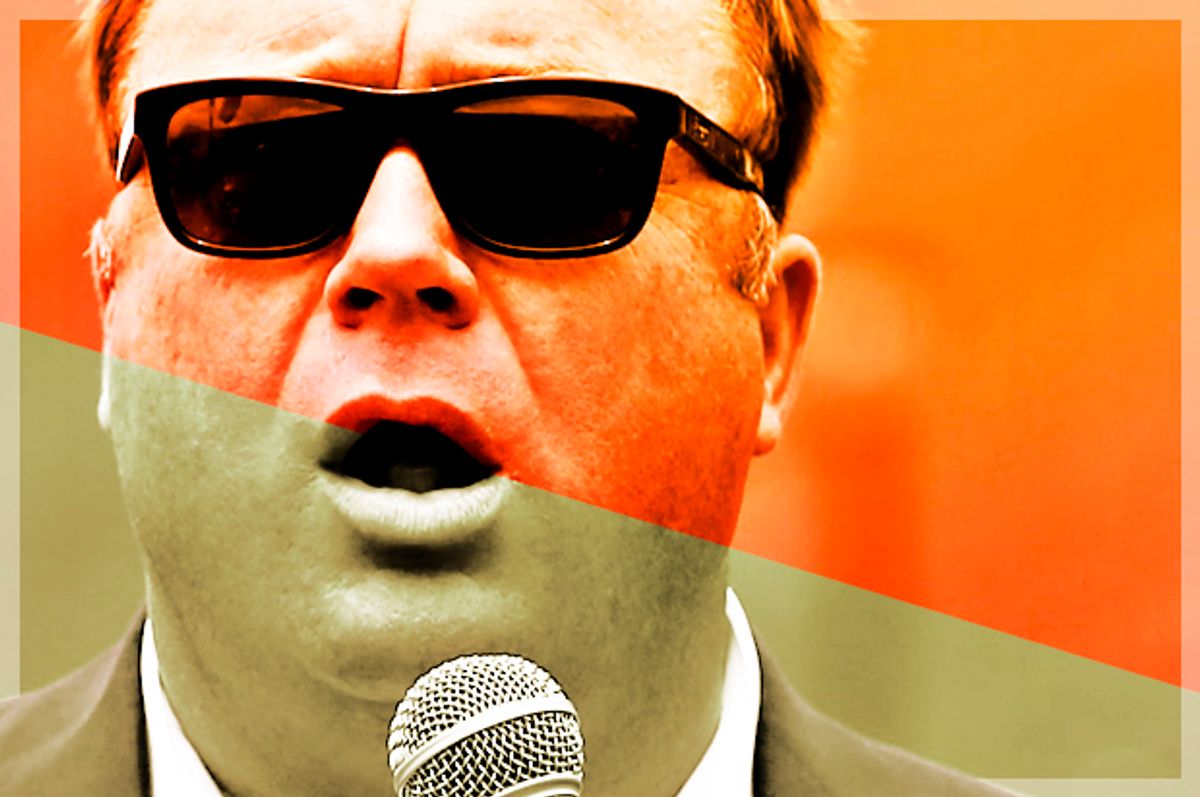 Kurt Nimmo, a longtime former editor for Alex Jones’ Infowars.com, has been publicly trashing his ex-boss as a “snake oil salesman” who sold out to support President Donald Trump.

Alex Jones and his Infowars.com are known for pushing conspiracy theories, including claiming the government perpetrated the 9/11 attacks and the tragedies at Columbine, Oklahoma City, Sandy Hook, and the Boston Marathon, among others.

The site’s editor, Paul Joseph Watson, apparently has no editorial standards and has repeatedly posted fraudulent information. Jones recently announced that the purported news organization would be attending White House press briefings and that it had hired widely discredited reporter Jerome Corsi as its D.C. correspondent.

Infowars has become one of the leading sources of pro-Donald Trump boosterism. Trump’s presidential campaign repeatedly tweeted out links to Infowars content in 2016. Trump himself tweeted out a link to Infowars.com’s aggregation of a conservative blog post to claim that Muslims in New Jersey celebrated the 9/11 attacks. (In fact, no evidence supports that.) Trump appeared on Jones’ program during the presidential campaign and apparently called Jones after the election to thank his audience for its support. Trump adviser and regular contributor Roger Stone told The Washington Post that Trump “has watched Infowars.”

Nimmo states on his LinkedIn page that he worked for Infowars.com from October 2008 through July 2016 and “built [the] current website from the ground up in 2008.” He now operates his own website Another Day in the Empire and is a content producer for Newsbud.

Nimmo has repeatedly trashed his former employer for turning into “infotrump.” He tweeted that the site has become “the Trump branch office in Austin” and that Jones "turned over his audience to the #Trump Borg hive." He’s also called Jones a “snake oil salesman” who is “playing the race & religion card.” Nimmo responded to the site’s hiring of Jerome Corsi by writing: “#Infowars hires neocon, joins Republican effort to rekindle Cold War. Imagine my surprise.” He has also suggested that Jones has purged personnel who have disagreed with his new direction.

Here are some of his tweets trashing Infowars.com and Alex Jones:

@FantasyNugs NO I no longer work for the Trump branch office in Austin.

@FluorescentGrey not going to happen they're alt right neocons now. That's where the money is. Alex Jones follows the money.

@sinisamajetic That's what Jones used to believe or said he did. Now he's playing the race & religion card. It's good for business.

@KitOConnell @TPM If he did, he would try to sell "male vitality" snake oil.

@pj_reed_407 @Slate Nope. Infowars supports Trump, I don't. I am against all those in favor or war. including deluded people like you.

@MrAWFULsuits I felt this way before I left infotrump, er excuse me, infowars.

@brent_e_russ @YouTube No way, he's indebted to him, he turned over his audience to the #Trump Borg hive.

@AntiMedia Of course. When he screams, he looks exactly like Donald Trump. The similarity is amazing. They're both faux Republicans. $$$

@beautremblay @AntiMedia LOL! I am contractually obliged to say nothing but yr on the right track.

@DropikD infowars does not "announce" when employees are terminated. they merely disappear as if they never existed.

@_20below More a hybrid of Breitbart, Drudge, & other altright propaganda outlets.