Does a young millennial entering this economy have anything to look forward to?

For young millennials entering the economy, our tweeter in chief would be a good thing if he wasn't so bad 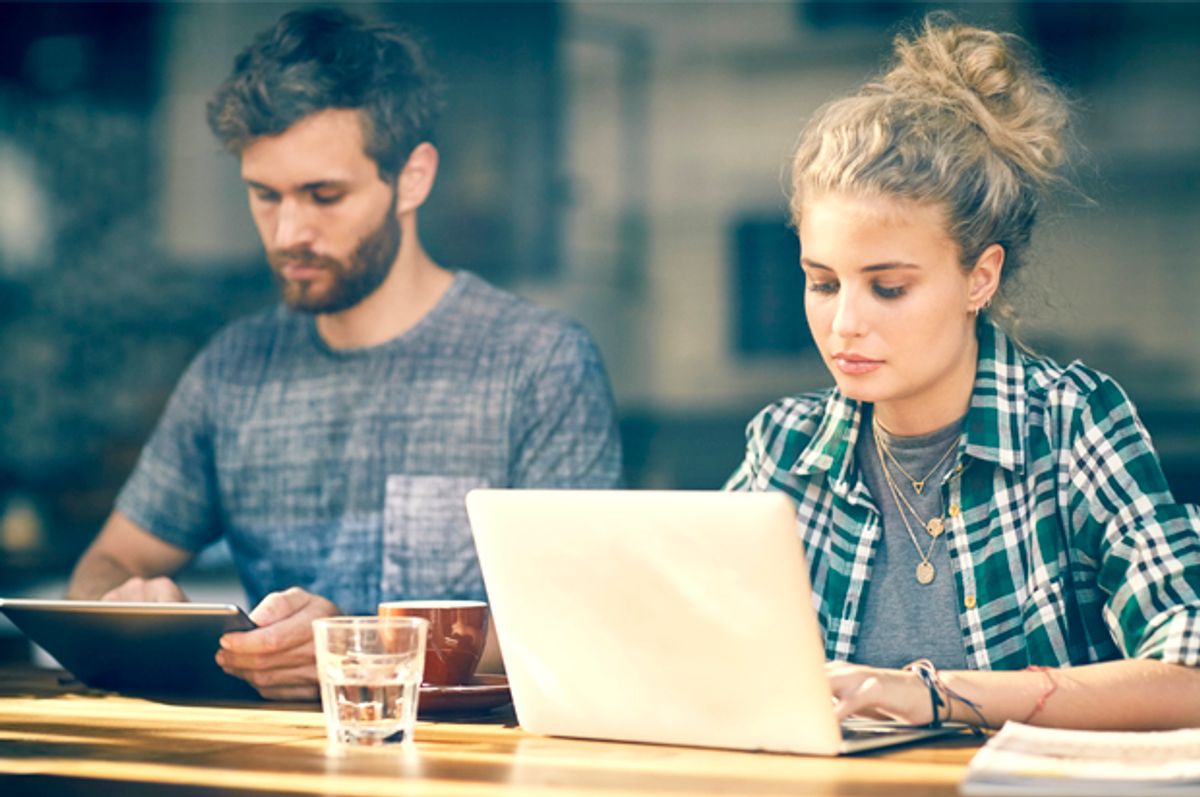 Recently one of my former students set up an appointment for us to discuss career prospects for her following her graduation from the University of Southern California this spring. Counseling young people entering the workforce is a routine task for lecturers. But this year it’s unclear to me how this talented young woman should begin her professional life amid a country in relative chaos.

My best pep talk might mean nothing. As the new world order reveals itself, American workers of all ages are asking themselves how they fit into the unpredictable promise of 21st-century prosperity. At a time when 51 percent of all job tasks could be automated by today’s technology, the subject of the impending showdown between the sharing economy versus Trump’s resurgent coal mines was barely discussed in last year’s electoral, er, discourse. As a result, a generation that thought it was on Elon Musk’s rocket ship to barter-based intergalactic markets is suddenly grounded on the platform waiting for launch.

It’s a particularly tense situation for the post-Bernie iPhone socialists. They have to remain patient while things play out, and that’s going to take a lot longer than it does to be the 1,255,658,971st person to watch Rihanna intone “This is what you came for” in a four-minute YouTube video. Not only is the waiting uncomfortable; it is virtually impossible to forecast an outcome amid all the emerging paradoxes.

The young lefties who begrudgingly cast their ballots for Hillary Clinton weren’t exactly espousing the talking points about meritocracy favored by Silicon Valley technocrats. The millennials wanted to take down the 1 percenters who fund all the cool apps with venture capital. As recently as October, shuttering the six-second video app Vine was considered an authoritarian act against creatives of color, but by February the tech companies have become the country’s best hope against stopping Trump’s Muslim ban.

While Democrats point fingers and plot their 2018 comeback, are the kids learning to turn to the private sphere for progress? If it weren’t for the blatant white nationalism, one could almost argue that our tweeting CEO in chief really is the ideal leader for this pivotal moment in job creation.

Perhaps I should tell my student that what patronizing adults call the real world is more upside down than “Stranger Things” — that the stifling confines of conventional wisdom have imploded. That it has always been a good idea to think for one’s self and even more so now.

The Daily Beast recently declared that millennials have become modern-day feudal serfs, plagued by high unemployment rates, student debt and astronomical home prices. Reports indicate that millennial job seekers are afraid of how the isolationist Trump era will affect their career opportunities. My former employees in their mid-20s text me weekly saying they feel a sense of obligation now to run for office, or forgo previous plans so as to work full time in the social justice sector. Most will not support Trump, but what exactly will they do?

At this point, it’s OK if they don’t know yet. They just need to start trying things until something works. They were all born entrepreneurs whether they wanted to be or not; the times require them to re-create our social structures in the digital and artificially intelligent economies.

It would be unwise, however, for my student or any young people to believe that the structures of technology endemic to millennial life will sustain a responsibly interconnected society. We weren’t all Facebook friends in a peaceful, nationless world. For all the talk of Silicon Valley bubbles inevitably bursting, the only one we’ve seen pop so far is our society’s useless digital feedback loop. A coalition of tech CEOs may be the only viable check against the new government for the foreseeable future, but that doesn’t mean the industry heavies will always choose the moral high ground — especially when their entire ethos is based upon the mob rule of their users. Perhaps standing against insatiable audience growth is the new anti-capitalism. These companies have plenty of reason to cozy up to Trump and vice versa. Surely the Mountain View monopolies won’t be broken up by the guy who owns Park Place.

What I will tell my student is to start disconnecting from the daily information cycle, and rely primarily on diverse historical narratives to think about what her graduating class must build — and how hard the work will be. Hers is a generation insulated by remarkable progress. Yet disruptive technology, racial conflict and immigration debates are as old as this country. The 20th century began on the heels of civil war amid raging battles over cheap labor and abuse of factory workers. Just 17 years in, the United States entered World War I. A hundred years later, is that the type of situation where we are now as well? Maybe.

It’s a terrifying thought. Yet nearly 85 years later (after Alice Paul led a hunger strike for women’s suffrage and Al Gore invented the internet), I graduated from UCLA in 2002 and remember it today like it were yesterday. I cried alone that morning looking in the mirror, aware of the sacrifices of previous generations that made it possible to attend a university. I was a millennial woman at the turn of a new century, better equipped to contribute something of substance while embedded in the same old squabbles. Reeling in confusion and anger after the controversial 2000 election and the 9/11 attacks, I never could have imagined then that the suffering America endured would usher in our first black president and technologies that would dramatically alter our ways of life. In retrospect I realize that I was seeing up close with my own eyes the way we are all live in a world that's much deeper than the banalities and bullshit that surround us. We have to be bigger than all of it.

I will tell my student to expect radical change to happen again and again. I will tell her to remember the legacies she has inherited but to create the things we need now. I will tell her to adhere to a compass inside herself because neither markets nor governments can fully determine what’s best for a human being.