The cost of hostility: Why the U.S. should treat Mexico as a vital partner

Hostility with Mexico would cost U.S. workers, companies, consumers and farmers and the security of our homeland 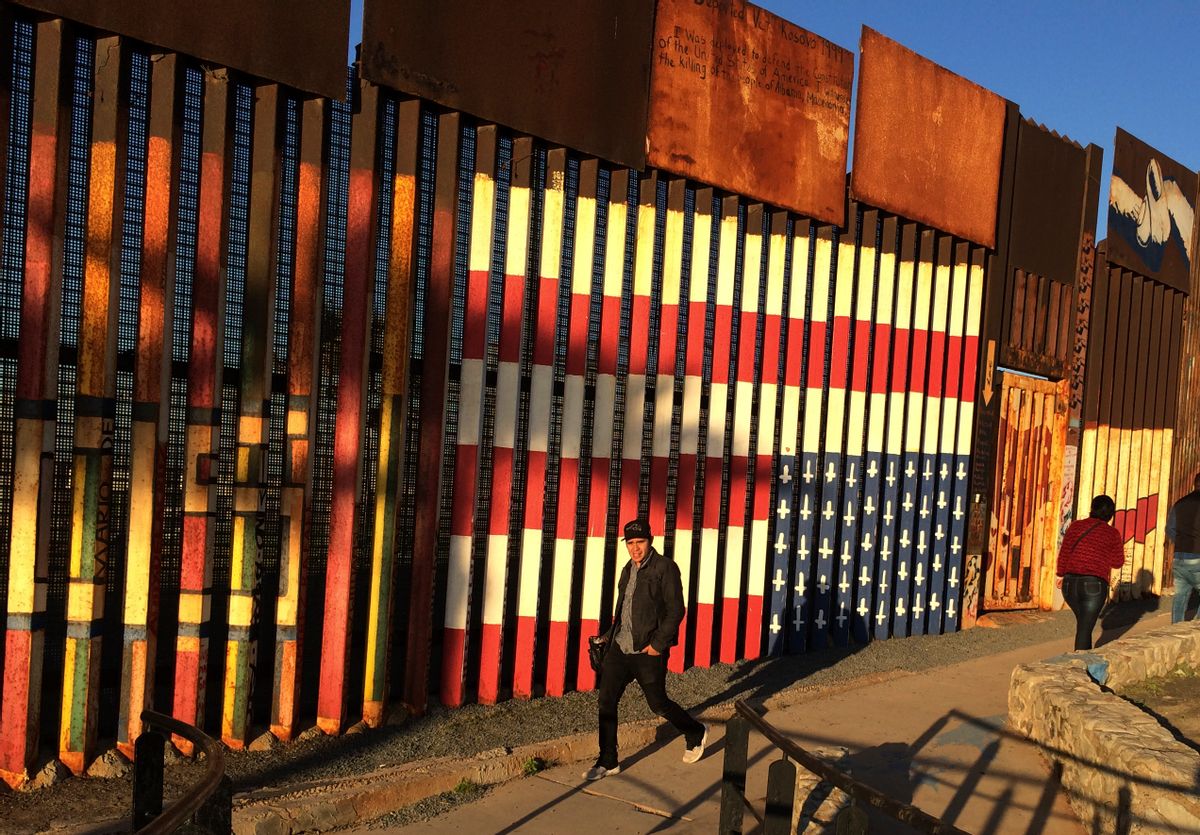 Mexico is one of the most important countries in the world for the United States. It’s the second-largest buyer of U.S. goods, the third-biggest consumer of U.S. agricultural products and America’s third-most-important trading partner, after China and Canada. We trade over a million dollars of stuff every minute.

So as we prepare to sit at a negotiating table across from our southern neighbor, we should recognize that treating Mexico as a respected partner would be a good start if we hope to favorably resolve serious issues over trade, immigration or fighting crime. The U.S. will be safer and stronger if we can forge even closer cooperation with Mexico while finding solutions to the problems each side wants to fix.

The sharp, critical rhetoric coming out of the new U.S. administration, however, is undermining a mutually beneficial relationship that has taken decades to build. It’s generating intense public anger, suspicion and fear in Mexico and fueling anti-Americanism. There is a real risk of returning to the deep distrust that characterized past U.S.-Mexico ties. That would be very harmful to U.S. strategic interests.

As the U.S. ambassador to Mexico from 2011 to 2015, I saw firsthand the strength of the relationship and the benefits of collaboration, even as I recognize that many improvements can be made in our bilateral ties. It would be a shame to throw those benefits away, which would seriously harm the U.S.

From foe to friend to foe?

The United States is blessed to have two large neighbors willing to work with us to foster mutual security and prosperity. While Mexico may not be a NATO ally like Canada, it is no less vital to U.S. interests and no less willing to be a partner. To get here, the two countries have spent the past 25 years overcoming a troubled history.

The Mexicans still remember vividly the war that began in 1846 that ceded much of their country to the U.S., including modern-day Texas and California. Every year, they celebrate “Los Niños Héroes,” referring to the teenagers who threw themselves off a cliff rather than surrender to U.S. marines invading Mexico City and those who fought the U.S. occupation of Veracruz in 1914.

The mistrust lingered through the 1980s, when Americans still characterized Mexicans as “distant neighbors.”

Change began with the negotiation of the North American Free Trade Agreement (NAFTA) in the early 1990s and continued when the U.S. helped Mexico recover from a major economic crisis in 1995.

Especially since 2008, the U.S. and Mexico have formed strong cross-border collaborations on security, law enforcement, migration, foreign policy and many other issues that are profoundly in the strategic interests of the United States.

Simultaneously, under NAFTA, the private sector was building vast interconnected networks and manufacturing production chains across North America that brought added wealth to each country and turned the region into a global economic powerhouse that could compete effectively with China and others in Asia.

Public rhetoric from the Trump administration is putting much of this in jeopardy. It has generated serious backlash among Mexico’s public and politicians and put much pressure on the government to resist vehemently Trump’s demands, especially over who pays for a border wall. But the potential treatment of undocumented Mexican nationals in the U.S. also remains a serious and emotional concern.

The Mexican peso has plunged – ironically making its exports less expensive for American companies and consumers to buy. And Mexico’s economic outlook has weakened considerably – a weaker economy actually increases the likelihood residents will try to find a better life north of the border at a time when net immigration flows of Mexicans are moving south.

The growing popular anger means a generation of Mexican politicians, officials and experts who favored promoting closer ties with the U.S. are now on the defensive. The Mexican dailies and radio programs are filled with calls for the government to get tougher with the U.S., even if it’s costly to Mexico. This limits room for serious negotiations. Worse still, this is giving a lift to the most anti-American presidential candidate, Andrés Manuel López Obrador, running to replace the current president in 2018.

The costs to the U.S. of continuing on this path would be enormous.

A closer look at NAFTA

Let’s start with NAFTA, since that’s the source of some of the biggest complaints from both Trump and politicians from the left such as Bernie Sanders.

First, NAFTA is not the cause of the great economic woes or job losses as portrayed. Rather, it has spurred U.S. economic growth, produced millions of new jobs (including higher skilled ones), lowered costs for consumers and helped us overcome enormous trade competition from Asia.

Plus, Mexico is an essential partner in U.S. production chains, where inputs for a final product regularly cross the border several times. Up to 40 percent of the final value of a product manufactured in Mexico comes from U.S. suppliers. That is far more than in any other country.

In sum, according to a 2013 study by the Peterson Institute for International Economics, the U.S. “is $127 billion richer each year” because of NAFTA.

Improve it, don’t rip it up

Yes, there are problems with NAFTA. It was the first trade deal of its kind and is 24 years old. It can, and should, be improved. And workers and communities harmed by it and other trade and industry transformations should be helped with active assistance.

Still, NAFTA is not the main source of U.S. job losses that President Trump claims it be. The introduction of new technologies and trade with China are much larger causes of manufacturing job losses.

And it is not NAFTA’s fault that the U.S. government did not have a sufficient strategy to help those left behind find new jobs, develop new skills or attract investment to their communities.

Disrupting our trade with Mexico by withdrawing from NAFTA or by adding new taxes, tariffs or fees would raise prices for U.S. consumers and could endanger many of the millions of U.S. jobs tied to North America’s production chains and sales to Mexico.

So let’s have a clear-eyed look at how we can improve and update NAFTA to create more jobs and prosperity.

For example, we could add new areas like e-commerce where the U.S. is very strong. We could get better treatment for U.S. service providers. Significantly, we could change the “rules of origin” that determine if a manufactured product has enough “North American” input to be tariff-free. We could eliminate nontariff barriers that add costs at the borders and could strengthen labor standards.

But let’s not publicly distort NAFTA or blame it for trends whose causes and remedies are elsewhere.

A wall of facts

Let’s also be honest about the border wall, migration and public security, starting with key questions that still don’t have adequate answers from the administration.

Why should Mexico have to pay for a wall that it does not think is needed and when more Mexicans are returning to Mexico than heading north? Where is the cost-benefit analysis that demonstrates that a full wall is the best way to assure border security? What will the real cost be? Is it really needed or even feasible?

I visited the border a good number of times – including during the surge in migrants from Central America – as ambassador and talked regularly with our homeland security personnel and border business and political leaders. Some certainly spoke in favor of additional walls or fences in some places and about the need for better surveillance and more rapid response capacity in others, but many also argued that walls don’t make sense along big chunks of the border.

Trump’s Department of Homeland Security Secretary John Kelly at his confirmation hearings noted that a physical barrier itself would not be sufficient. He argued for a layered defense with sensors and patrols and emphasized the need for cooperation with other governments.

Alienating the Mexicans over who pays for our wall puts that cooperation at risk. We need Mexican aid to stop undocumented immigrants, to confront drug traffickers and other criminals and to have the best defense against any potential terrorists trying to enter via Mexico.

Most of my Mexican interlocutors agreed that border security could be improved and we should work better together to stop illicit trafficking of drugs, guns, money and people as well as potential terrorists – in both directions. Current U.S.-Mexico cooperation ranges from sharing names of suspicious individuals and detaining suspicious travelers far from the border to coordinating efforts against criminals, like drug kingpin Joaquin “El Chapo” Guzman, who was just extradited to the U.S.

Mexico is also already seriously cooperating on migration. Both countries have agreed upon and implemented protocols for smoothly handling deportations from the U.S. and for avoiding border violence. The Mexicans are stopping many Central American migrants before they even reach the U.S. border. In 2015, Mexico deported over 165,000 migrants apprehended along its border with Guatemala, more than the 135,000 that U.S. officials apprehended at our border. Without Mexico’s help, many more migrants would have arrived in the U.S.

The broad opinion in Mexico, however, views the wall plan and the accompanying rhetoric about Mexicans as affronts to Mexico’s dignity. They bridle at the public characterizations of Mexicans during the campaign as criminals and shudder at talk of mass deportations.

Mexican officials tell me that if the U.S. wants to build it on U.S. territory, that is our choice. Trying to force Mexico to pay for it, however, is rekindling resentment about past U.S. abuses of Mexican sovereignty, they argue.

When Trump publicly tweeted that Mexican President Pena Nieto should not visit Washington if he will not pay for the wall, he painted his counterpart into a corner with the Mexican public, forcing him to cancel his trip.

Subsequently, the two presidents spoke by phone – with Trump reportedly suggesting he could help by sending the U.S. military south to take on the drug cartels, setting off alarm bells in Mexico. Talks between Secretary of State Rex Tillerson and his counterpart and other officials have since calmed things down.

But the public attacks have created a strong sense that Mexico must resist U.S. pressure and be prepared to respond firmly. Some social groups are already calling for boycotts of U.S. goods.

The real danger is that U.S. words and actions will revive the old sense of hostility in a country very important to our security and prosperity. That would be very costly for U.S. workers, companies, consumers and farmers, not to mention the security of our homeland.