The GOP's new war on women: Mitch McConnell, Elizabeth Warren and the newly empowered sexism of the right 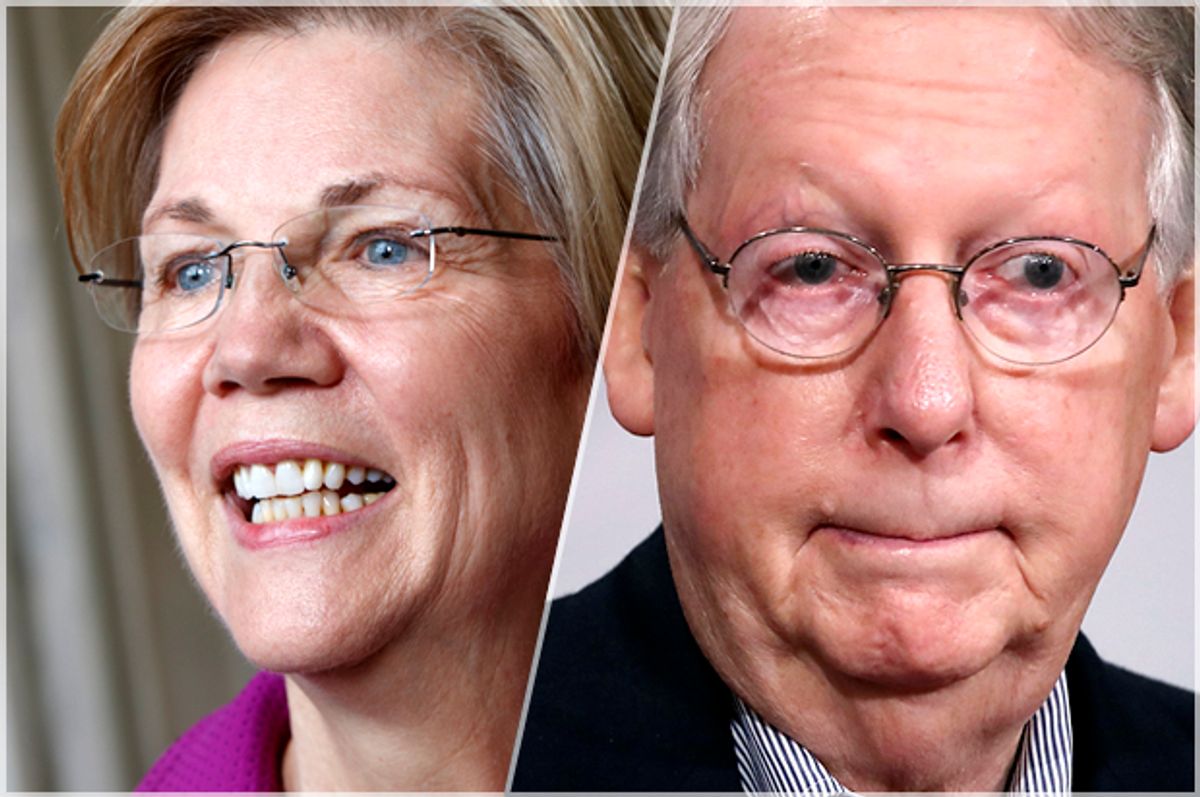 Perhaps Sen. Mitch McConnell should have skipped his quadrennial all-day post-inauguration nap. Being awake for the Women's March and witnessing all the rage and energy of millions of feminists might have woken him up to what kind of bee's nest awaited him on Tuesday night, when he tried to stop one woman, Sen. Elizabeth Warren, from quoting another woman, Coretta Scott King, during the debate over Sen. Jeff Sessions' nomination for attorney general.

Warren tried to read a letter that the now-deceased King wrote in 1986, accusing Sessions (correctly) of using "the awesome powers of his office in a shabby attempt to intimidate and frighten elderly black voters." McConnell invoked an arcane rule forbidding senators from insulting one another during debate as a pretext to banish Warren, who then read the letter aloud on Facebook Live, leading to millions more watching her than would have been the case if she had simply read the letter on the Senate floor.

"She was warned. She was given an explanation. Nevertheless, she persisted," McConnell complained during debate, fully embodying the feminist caricature of a fussy man displeased by uppity females, and thereby spawning hundreds of T-shirts and Twitter memes literally overnight. Warren herself took full advantage of the opportunity, hitting social media and cable news hard to highlight what happened.

McConnell's behavior would have been noteworthy at any time, but the amount of negative attention he's receiving is compounded by the widespread suspicion within feminist circles that the election of pussy-grabber-in -chief Donald Trump is ushering in a new era of misogyny.

"We’re going be blown backward so far that this irredeemably shitty year may someday look like a lost feminist golden age," Michelle Goldberg of Slate wrote at the end of 2016. "The massive power of the American state is about to be marshaled to put women in their place."

McConnell's tantrum is just the latest incident in a long line of incidents suggesting that conservatives are feeling more empowered to be overt and blunt with their sexism, as Dan Merica of CNN witnessed in December:

The swamps of Trump-loving right-wing media, never a female-friendly place to begin with, have become even more dense with hysterical pronunciations about the evils of female independence.

Televangelist Jim Bakker spent his post-inauguration show ranting about how the Women's March was "driven by demons" and recommending that politicians "control those demons that were in those women."

"Isn’t it time to get past the exaltation of unrestrained womanhood that’s degenerating into Christ-hating blood lust?" wrote Linda Harvey, the head of Mission America, in a January column for WorldNetDaily. "If the pro-abortion feminists had their way, our culture would devolve into worship of a goddess who requires child sacrifice."

Right before the Super Bowl, Trump favorite Alex Jones of Infowars also linked outspoken women to Satanism and witchcraft, accusing Lady Gaga of using the halftime show as a demonic ritual where she would present herself as "the goddess of Satan." Jones has also suggested that Gaga is somehow linked to Pizzagate, the right-wing conspiracy theory accusing feminist politicians and celebrities of pedophile sex trafficking.

Here's a typical headline from Infowars, as curated by Media Matters: It used to be easy to dismiss this kind of hysteria as fringe rhetoric, but with Trump in office and former Breitbart head Steve Bannon by his side, the fringe people are now the ones running the show. More mainstream conservative outlets like Fox News are becoming more blatant with the misogynist rhetoric.

In January on Fox News, conservative guest Crystal Wright characterized Women's March participants as "whiny, PMS-ing" overprivileged twits who don't work. In the past, Wright has lambasted feminists for "compelling women to enter the workforce with this mindset they should not only compete with men but act like them." She really needs to decide whether women having paid jobs is a good thing or a bad thing.

That same week, Bill O'Reilly compared feminist marchers to "the totalitarian governments in the 20th century." It's not clear in what way those things are like each other.

Even CNN host Piers Morgan had his own march tantrum:

Naturally, the sexist griping has continued in the wake of Warren's silencing.

Fox News' Brian Kilmeade weighed in Wednesday morning, saying on "Fox & Friends" that the Massachusetts senator was "desperate to be noticed."

"But the left is up in arms because those evil Republicans made a woman shut up," his co-host Steve Doocy responded.

Nor is McConnell the only politician to make headlines lately for throwing a sexist tantrum over outspoken women. Virginia congressman Dave Brat had an embarrassing round of news coverage when a video of him surfaced with him complaining that "the women are in my grill no matter where I go," while a roomful of male supporters chuckled.

But as the outpouring of support for Warren makes clear, this undisguised sexism will be met by renewed energy from liberals and feminists who have had enough of this nonsense. Warren is quickly shaping up as a symbol of the fact that old-line men in power can no longer expect women to slink off quietly after being reprimanded. Conservatives can shout at women all they want, crack sexist jokes and invoke outmoded rules to shut women up. Nevertheless, they will persist.