Trump and terrorism: Why is the White House ignoring the real danger of homegrown extremism?

Ask the FBI — the biggest danger comes from white supremacists, "sovereign citizens" and other homegrown nuts 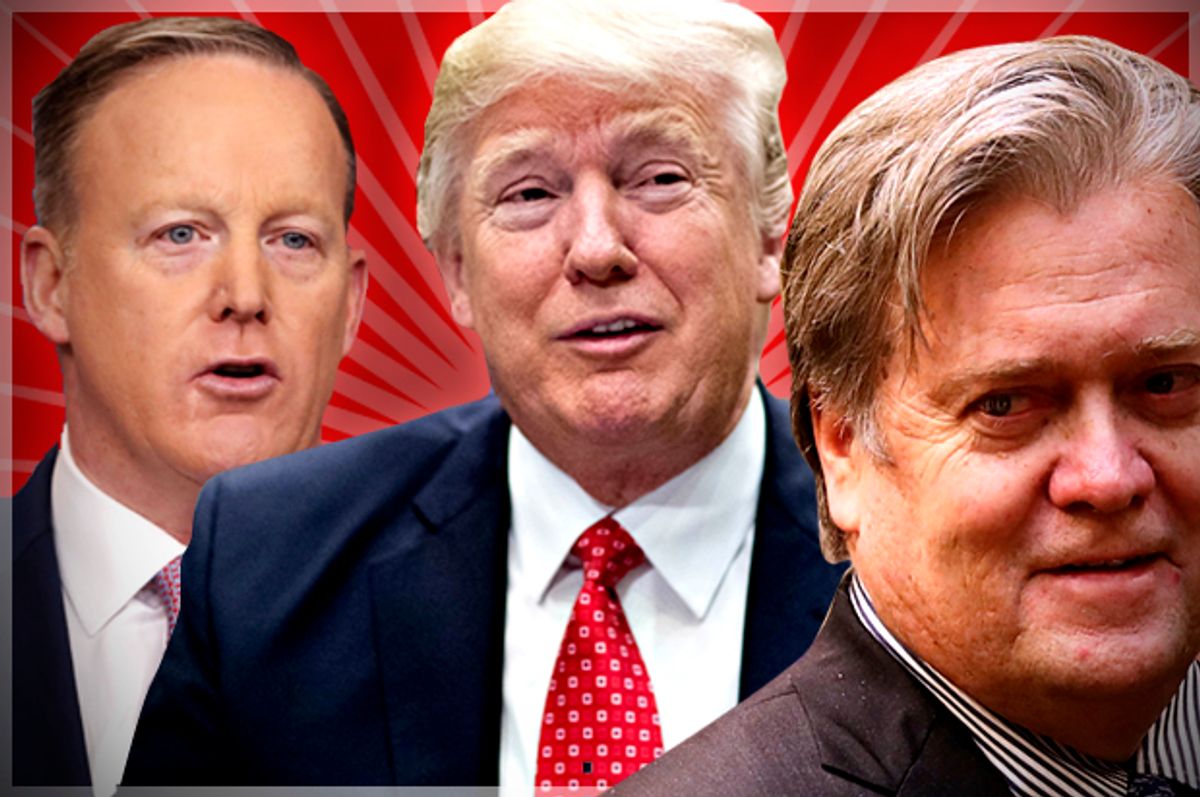 The brouhaha between the Trump administration and the press has continued all week, with President Trump complaining publicly that the media is refusing to cover terrorist attacks for unspecified reasons:

You’ve seen what happened in Paris and Nice. All over Europe, it’s happening. It’s gotten to a point where it’s not even being reported. And in many cases, the very, very dishonest press doesn’t want to report it. They have their reasons, and you understand that.

It was natural that the media suspected Trump was referring to the "Bowling Green massacre," which Kellyanne Conway had been publicly insisting had not been covered by the media. (She was right. It wasn't covered — because there was no Bowling Green massacre.) But when the White House released a list of 78 terrorist attacks the administration claimed had not be adequately covered, it included Paris; Nice, France; San Bernardino, California; Orlando and Brussels, among dozens of others that had received wall-to-wall coverage for weeks.

Then the White House explained that it was really referring to attacks overseas like the machete-wielding man who threatened people in Paris last week and was killed before he could hurt anyone. Such attacks aren't being given the kind of hysterical reporting that Trump's officials apparently believe is necessary for citizens to understand the threat. They want to ensure that Americans think they are in danger of being hacked to death by deranged Muslims at any moment.

Obviously, terrorism is a danger in this world. There isn't anyone on the planet who is unaware of that. But this idea that foreign terrorists are the greatest threat to America has been repeatedly debunked in recent years, because the data simply does not back up that claim. Despite this, after the Paris and San Bernardino attacks Donald Trump seized on the xenophobic paranoia that was setting the right wing aflame. He tied his existing Mexican-immigrant bashing to Muslim-immigrant bashing, and the issue took on a life of its own.

Before Trump burst on to the scene, the FBI's director, James Comey, and other top law enforcement officials were making it clear that the danger from ISIS-style attacks in the United States did not stem from foreign immigrants or refugees but rather homegrown "lone wolves," usually young male misfits who became radicalized online. The authorities told us to keep calm and carry on because it was very difficult to catch such plots in advance, although they were working diligently to do so.

Most Americans accepted this with resigned equanimity. The reason we were all able to take this risk in stride (aside from basic common sense) is because we understand perfectly well that this country is chock-full of such lone wolves, many of them mentally ill, armed to the teeth as a result of loose gun laws and driven by demons that generally have nothing to do with Islam. We have had to learn to live with unbalanced young men entering public places and mowing down innocent civilians for every reason and no reason under the sun. Why should we panic just because some of them are now doing it because they are in the grip of a specific extremist ideology? Whether a killer is motivated by hallucinations, racial hatred or religious extremism, the victims are no less dead.

But Trump showed throughout the campaign that the only violent extremism he finds threatening is Muslim extremism and he has gone to great lengths to gin up irrational fear of it among his followers. And that's very telling since law enforcement officers have said they are even more concerned about a different ideology: right-wing, anti-government extremism, particularly the "sovereign citizen" movement that has evolved out of white supremacist groups. Unfortunately, the Trump administration plans to stop tracking such groups in order to concentrate on the alleged hordes of Islamic jihadis in our midst. No wonder neo-Nazis cheered wildly when Trump was elected.

Donald Trump has still not said or tweeted one word about the man who walked into a Quebec mosque and mowed down six people a week ago. Dylann Roof, the perpetrator of the 2015 massacre in  Charleston, South Carolina, was on trial during the presidential transition and Trump was too busy scolding the cast of "Hamilton" and critiquing Alec Baldwin's performance on "Saturday Night Live" to spare a single tweet.

Of the 78 acts of terrorism that the White House accused the media of refusing to adequately cover, all were perpetrated by Muslims. It didn't mention the right-wing fanatic currently on trial in New York for plotting to take an assault rifle, armor-piercing ammunition and other weapons, including a machete, to a small Muslim community and murder as many people as possible. They didn't include this week's guilty verdict in the trial of a Minnesota white supremacist who went to a Black Lives Matter march and shot five protesters.

They didn't include Robert Dear, the man who used Republican talking points about "selling baby parts" while conducting a rampage at a Planned Parenthood clinic in Colorado Springs, Colorado, killing three people. The White House failed to note the story of the "white power" couple in Las Vegas who spent time at the Bundy ranch and assassinated two police officers, covering them with swastikas after the fact. The list also didn't include the Ku Klux Klan member sentenced in December to 30 years in prison for conspiring with another man to build a dirty bomb to "'take his country back’ from government leaders by forcing them to change government conduct he perceived as favoring Muslims," according to prosecutors.

That's just a short list, chosen at random, of terrorist attacks planned by right-wing extremists in the last couple of years; none of these has the Trump administration mentioned even in passing amid its nonstop fearmongering and demagoguery about Islamic terrorism. Needless to say, the Trump team also has nothing to say about the massive death toll from gun violence perpetrated by average Americans every single day.

Donald Trump sees an America that is terrified of foreigners of all stripes and wants the media to help him stoke that fear for his own purposes. One cannot help but wonder what the president would do if a modern-day Timothy McVeigh managed to succeed in carrying out another one of these horrifying right-wing terror plots that Trump doesn't seem to notice or care about. We have to hope the American people will understand where to lay the blame.