Dakota Johnson gets out of bed, flaunting her lovely, supple, perky breasts: A review of “Fifty Shades Darker”

“Fifty Shades of Grey” scored as erotica for straight women and gay men; the sequel belongs to a more icky demo 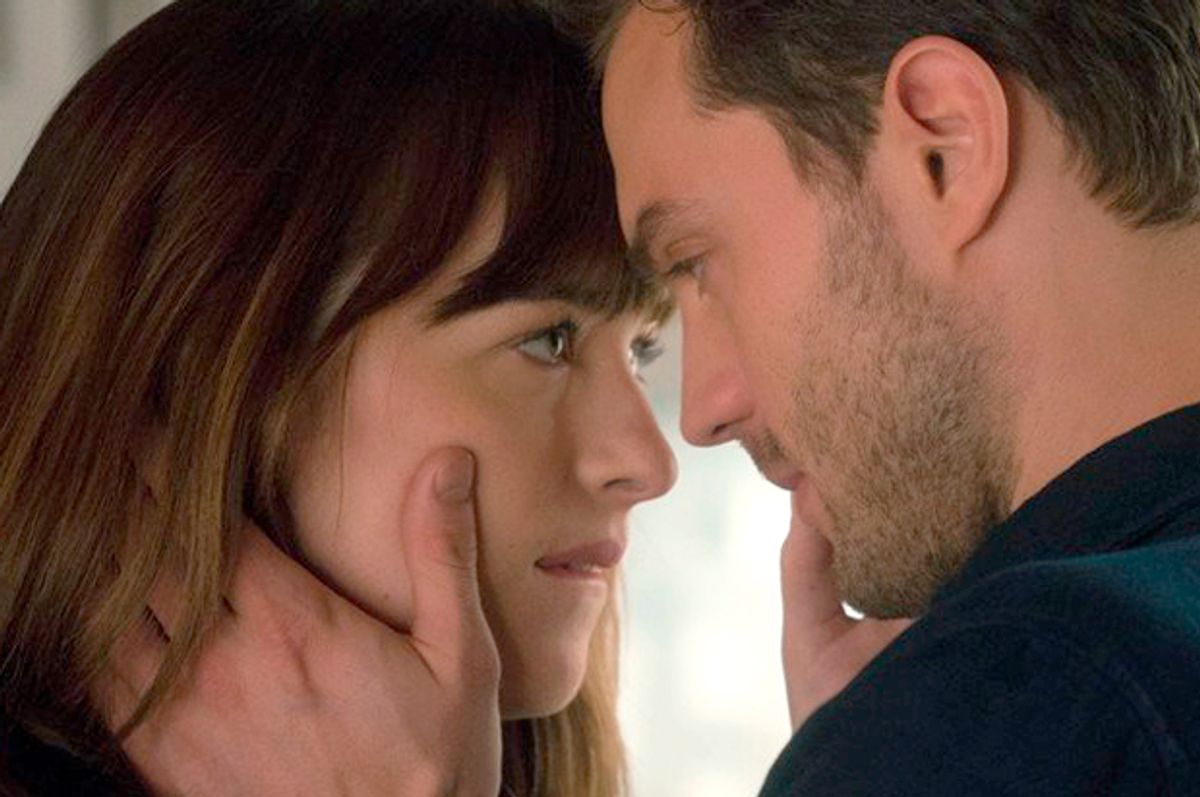 “Fifty Shades Darker” is now being released in theaters, and the question that has fans biting their lip in anticipation is: Will it be better than the first? Well, that depends on how you define better. The target audience for female erotica (women and gay men) will likely be disappointed that when it comes to the purple parts of Christian Grey, more is in fact less.

For anyone who didn’t see (or doesn’t remember) “Fifty Shades of Grey,” here is a quick recap of the relationship and the sex scenes.

In director Sam Taylor-Johnson’s adaptation of the E.L. James best-seller, Anastasia Steele (Dakota Johnson) is a college senior who literally falls for billionaire Christian Grey (Jamie Dornan) when she trips upon entering his office to interview him. She bites her lip and his pencil. She is intimidated by him and learns little more than that he “enjoys various physical pursuits.” When Christian later shows up at the hardware store where Anastasia works — to buy cable ties, masking tape and rope  — their relationship, which consists of an extended game of catch and release, develops further. He says he doesn’t do the girlfriend thing, but he does kindly hold her hair as she vomits. And he buys her expensive presents.

Finally after 30 minutes, Christian takes his shirt off, allowing Dornan to show off his gym-built arms, as well as his chest, stomach and back muscles. He also reveals he has “very singular” tastes. Speaking of taste, Christian finally kisses Anastasia, passionately, in an elevator. He later tells her, “I don’t make love. I fuck. Hard.” Then he shows her his playroom. And, no, it’s not where he keeps his Xbox, as she asks in one of the film’s intentionally funny moments.

Cue the first sex scene, where Christian takes Anastasia’s virginity and displays his glorious gluteus maximus. Dornan’s butt is indeed as sculpted as the rest of his rock-hard body. His ass is so perfect they really should market a plaster of Paris paperweight of it. There is considerable kissing and nudity — mostly hers. But he is shirtless at the piano, postcoitus, until she turns up and straddles him naked. More shirtless scenes show off Dornan’s body by Soloflex. Dakota Johnson repeatedly gets fully naked, displaying her breasts and bare behind as well as her pubic hair in a scene where he binds her wrists on the bed — Christian is very good at tying knots — until his mother (Marcia Gay Harden) interrupts them.

Step, undress and repeat. Christian is shirtless and shoeless in the playroom giving Anastasia the service. Stripping her naked, tying her up, kissing her and running an ice cube over her nipples and her navel. He turns her over and spanks her, and fucks her from behind.

Despite the box office success of “Fifty Shades of Grey” female filmmaker Sam Taylor-Johnson did not direct the sequel. James Foley got the assignment for this installment and next year’s sequel, “Fifty Shades Freed.” While Foley is a competent director, he is no soft-core specialist like the late Zalman King or even Adrian Lyne, directors who could make a film like “Fifty Shades Darker” with their wrists bound. The book and the film are erotica by, about and for women. As directed by Foley, “Fifty Shades Darker” seems to be geared more for dirty old men.

In the film’s first 10 minutes, Christian reconnects with Anastasia in an effort to win her back. She tells him, “You got off on the pain you inflicted.” But the “Fifty Shades” films are not the kind of erotica you can get off on. The sex scenes just aren’t sexy, even without the kink. The passion just isn’t there.

The film’s first naughty scene has Christian undressing Anastasia and kissing her moist, silken warmth, causing the breathy actress to emit small moans of pleasure. But there’s very little pleasure in this sex scene and very few viewers will be throbbing. Maybe it’s just foreplay as Dornan flexes his back muscles, his ass peeks of out his jeans (which he keeps on!) — but it seems like a big, cheap tease. Foley quickly cuts to the lovers discreetly wrapped up in gray silk sheets, postcoitus. It may have been good for them, but it’s just not satisfying for viewers.

Anastasia gets out of bed, flaunting her lovely, supple, perky breasts. In what may be the sexiest moment in “Fifty Shades Darker,” Christian gets out of bed and transfers a large sum of money into her bank account while completely naked! Women (and gay men), savor this moment! It is one of the few times Dornan exhibits his rock-hard body and his cute nude caboose. The rakish and devastatingly handsome Christian Grey barely takes his clothes off in “Fifty Shades Darker.” In contrast, viewers will get quite drunk if they take a sip every time Dakota Johnson’s nipples are seen on screen.

Speaking of naked chests, there is a tender (but not really) scene where Anastasia uses lipstick to draw a “road map” on Christian’s finely chiseled torso. Her dark nipples, the size of half dollars, prompt fantasies of hands running over them or teeth sinking into them, but such fantasies are more delicious than what happens on screen. Anastasia later washes off the lipstick in a steamy shower with a Big, Soft, Wet — and very absorbent sponge that might fetch Christian Grey level billions from “Fifty Shades” fans at auction.

Their “kinky fuckery,” as she calls it, later consists of him spanking her and binding her hands (been there! done that!), but Christian, in this straight man’s fantasy, fucks her, hard and fully clothed. It is so clinical and unarousing, the sex scenes barely induce a quiver of throbbing in one’s nether regions, and the chemistry between the actors is debatable.

“Fifty Shades Darker” does tease with an exchange about nipple clamps, one of which Christian tests on Anastasia’s finger, if only to avoid harming Dakota Johnson’s aforementioned lovely, supple, perky breasts. There are only two visits to the famous playroom in this sequel, and less is not more. The kinkiest thing in the film may be Christian clamping Anastasia’s legs in a spreader bar as he fucks her — again with his clothes on! — before turning her over to take her from behind. Anastasia sticks her ripe-as-a-peach ass out; he keeps his pants on. It’s all male fantasy masquerading as female erotica.

Even a scene where Anastasia is brought to the — aaah! — brink of orgasm, as Christian fondles her naked moist silken warmth in a crowded elevator, generates more titters than heat. Hell, viewers are more likely to get excited and work up a sweat watching shirtless, rock-hard back-muscled Christian do his gym routine — OMG! just watch what he does on that pommel horse! — than during any of the film’s sex scenes. And this includes a shower scene where he literally rips her bodice, exposing her lovely, supple, perky breasts yet again and a subsequent scene that features Christian pouring oil over Anastasia’s lovely, supple, perky breasts and massaging it into her heaving chest that quivers with desire. Viewers may not feel the same passion, but at least there is a climactic shot of Dornan’s gluteus maximus here. Alas, his end also signals the film at its end.

“Fifty Shades Darker” is not darker or better. It’s watered down, raincoat-brigade style erotica, even with the spiced-vanilla S&M. Viewers looking for steamy seaminess or something more than just Dakota Johnson’s naked tits and ass might want to bring a blindfold.