The stress of sitting in traffic can lead to more crime 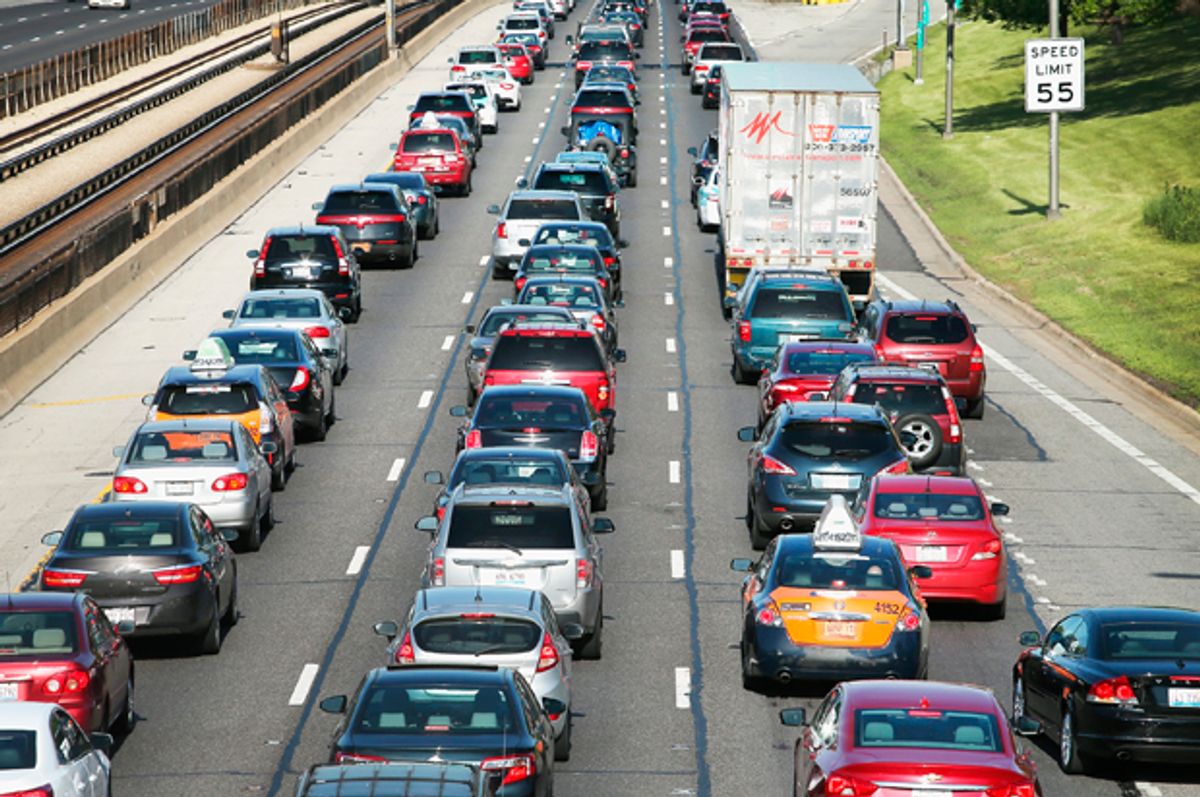 Society pays a heavy price for traffic. It leads to lost time, more pollution and increased spending on gasoline.

In metropolitan areas, road congestion in 2012 led consumers to waste 2.9 billion gallons of fuel and spend 5.5 billion hours sitting in traffic. According to the Texas A&M Transportation Institute, the average commuter wastes 42 hours a year stuck in traffic – more than an entire week of full time work.

Sitting in traffic is also an extremely unpleasant experience. It can cause one to arrive late to work or miss a business meeting, flight or court appearance.

But there may be yet another hidden cost of traffic. Research has linked traffic to negative mental health outcomes, including stress and aggression. In our research paper, we measured the psychological costs of traffic jams in Los Angeles County, specifically as they relate to crime. Combining traffic and police data, we found that unexpected high traffic lead to an increase in domestic violence.

Domestic violence has been shown to be sensitive to emotional cues. For example, when a local football team loses unexpectedly, domestic violence incidences increase by 10 percent.

Most people who are stuck in traffic will not be induced to commit crimes, but they still bear a psychological burden from traffic. Therefore, we expect our approach underestimates the true psychological cost of traffic.

According to traffic app INRIX, the city of Los Angeles is a candidate for the worst traffic in the U.S. In fact, six of the country’s 10 most congested stretches of highway are in metro LA.

Our empirical analysis combines over two million police incident reports with over 25 million observations of local traffic conditions in Los Angeles from 2011 to 2015. To measure the impact of traffic on crime, we assigned each ZIP code to the closest major highway that connects to the downtown area. We focus on two major roads, I-10 and I-5, that represent primary north-south and east-west routes to downtown Los Angeles. While these are not the only means of transportation in the Los Angeles metro area, they are likely to be correlated with traffic on other nearby routes of the same direction.

This rich data set allowed us to link traffic with criminal activity down to a very fine level detail with regard to time and place.

We found that extreme traffic (above the 95th percentile) significantly increases the likelihood of domestic violence by approximately 6 percent. There are smaller effects at lower thresholds of extreme traffic.

Since domestic violence typically occurs in the home, we were confident in our analysis that the offender faced the traffic typical of the commute at the location of the crime. We controlled for ZIP code and time effects, in addition to recent traffic conditions, to account for changes in expected congestion.

Our results varied for different ZIP codes. There was no effect of traffic on crime in low-crime areas. Meanwhile, in low-income areas, the effect we saw was about 1.5 percentage points larger than in areas above the median income for LA County.

We also measured high traffic and drivers’ expectations using alternative measures, such as the maximum travel time by the hour of the day. All of our tests show an increase in domestic violence incidents following unexpected high traffic. In other words, when drivers were hit with worse-than-expected traffic, such as a collision, we saw more cases of domestic violence.

Our results highlight a new consequence of traffic, in addition to the congestion, pollution and health impacts that have been established in the literature.

This is important, as the direct and indirect costs of a domestic violence incident is estimated to be up to US$107,020. We estimate that the economic cost of traffic-induced domestic violence ranges from $5 million to $10 million per year.

Since we expect most people who suffer some psychological costs of traffic do not actually commit crimes, we consider our estimates to be only the tip of the iceberg.

Documenting the psychological costs of traffic provides additional support for congestion management policies that not only reduce average travel times but avoid long delays. Building new capacity is unlikely to reduce congestion in the long run, since new roads are simply met with additional drivers.

Instead, policies such as time-of-day pricing, which charges higher tolls when traffic is high, might help combat the problem. For example, a 2013 study found that drivers report less stress after time-of-day pricing was implemented on a major road in Seattle. Our research suggests an additional benefit to these types of policies, but more research is needed on how different types of tolling structures improve travel reliability and driver satisfaction.